The Party of Antifa Fascists?

Paul Driessen
|
Posted: Oct 20, 2018 9:35 AM
Share   Tweet
The opinions expressed by columnists are their own and do not necessarily represent the views of Townhall.com. 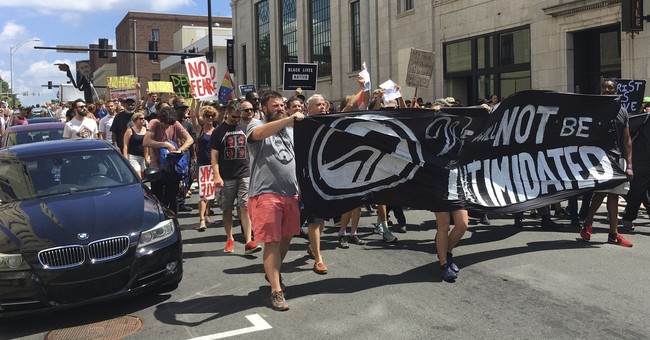 Who are the “Antifa” mobs? What are they doing to our country? How long will we tolerate them?

The Brett Kavanaugh confirmation hearings were their latest excuse for tantrums and intolerance. Dismissing fairness, propriety and due process, they screamed that mere allegations of misconduct were enough to bar him from the Supreme Court, despite no corroborating evidence or witnesses.

Vicious harassment of senators and White House officials in restaurants, streets, grocery stores, and Senate offices and elevators was matched by ambush tactics and despicable behavior by Senate Judiciary Committee Democrats. If Justice Clarence Thomas’s confirmation hearings were “an electronic lynching,” those hearings were an electronic assault on a respected jurist, his wife and young daughters.

When Kavanaugh fought back, the same Senators and their media friends said he “lacked the proper temperament” to be on the Court. (Apparently, he should have just tried to enjoy the experience.)

The fact is, Democrats and their allies had said in lockstep and from the outset that they intended to keep any Trump nominee off our highest court. The Women’s March mistakenly released a statement saying it opposed the “nomination of XX” to the Court. (They forgot to fill in the blank.) They view the Court as their supreme state and national legislature: it’s far easier to get 5 votes than 5 million or 50 million.

In reality, this ongoing attempted rule by mob (with Portland, Oregon a prime example) goes back to the 2016 elections that put Donald Trump in the White House. The mobs weren’t just disappointed that Hillary Clinton had not won. They were enraged. And they’ve remained so ever since.

In fact, their furor goes back even further – to mounds of excrement they left behind in North Dakota, for instance, where they tried to block the Dakota Access Pipeline, by burning and bombing bridges, threatening local residents and killing cattle. One “peaceful protester” tried to shoot a deputy sheriff.

In another example, they enlisted state attorneys general, universities, wealthy leftwing foundations and private law firms (on a contingency fee basis) to bring RICO and other actions against scientists and think tanks that voice skepticism about “cataclysmic manmade climate change.” On college campuses they have banned, disinvited, mobbed, harassed or just plain screamed over 300 conservative speakers into silence. Being a Republican or wearing a Trump MAGA hat can get you beaten, or worse.

They forget President Obama’s dictum: “Elections have consequences.” One is the President’s right to nominate Federal judges. But from their perspective, “consequences” must never apply when they lose – and the Electoral College must be abolished when it works as our Founding Fathers intended: to keep populous urban areas from dominating presidential elections and imposing a tyranny of the majority. (The fact that 85% of all US counties voted for Donald Trump illustrates this principle in action.)

In most of these cases, “they” are the Antifa mobs. Antifa being short for “anti-fascist.” Don’t be conned.

The Antifa mobs are fascists! And they have become the ski-masked thug wing of the Democratic Party.

They (and Alexandria Ocasio-Cortez, Kyrsten Sinema, Andrew Gillum, Bernie Sanders and other favored candidates) certainly espouse socialism as their vehicle for wealth redistribution. However, in almost every other respect, their philosophies and actions reflect fascism, which is generally defined as:

A political system in which an authoritarian government does not own businesses and industries, but strictly regulates and controls their actions, output and rights – while forcibly controlling and suppressing citizens and their thought and speech via stringent laws, intimidation and even violence.

Sadly, the Democratic Party is slipping further into these tendencies, becoming ever more closely aligned with these radicals. It relies on Antifa thugs to “rally the base,” intimidate and abuse Republican voters and candidates, and get Democrat (and “undocumented”) voters to the polls. Like too many in the “mainstream” news media, Democrats refuse to condemn the mob behavior – and say it’s wrong to even call them mobs. They’re just concerned citizens, peaceably assembling and seeking redress of their grievances. Right. (Hint: You don’t like being called fascist mobs? Stop behaving like fascist mobs.)

“You cannot be civil with a political party that wants to destroy what you stand for, what you care about,” Hillary Clinton said recently. So instead of civil debates we’re to have civil war over whose vision and agenda will rule? Is there something wrong, antiquated or “threatening” about debating issues?

Former Attorney General Eric Holder said, when Republicans “go low” with their rhetoric, “we kick them.” Rep. Maxine Waters (R-CA) incites Antifa mobs by ranting, “If you see anybody from the Trump Administration in a restaurant, in a department store, tell them they’re not welcome anymore, anywhere.”

Now on top of the speech codes, trigger warnings, boycotts, censorship, groupthink and identity politics, Google, Facebook and Twitter control and restrict access to conservative views; crowd funding sites prevent conservative groups from raising money; and the Obama IRS prevented Tea Party groups from getting the tax status needed to operate. When all that fails, we’re supposed to tolerate mobs and riots.

Antifa thugs fire-bombed a North Carolina Republican office and trashed another one in New York City, where they left a note that said, “This is just the beginning.”Others knocked a 71-year-old female congressional staffer unconscious! It even reached the point where a rabid Bernie Sanders supporter tried to gun down Republican legislators and staffers who were practicing for a charity baseball event.

Indeed, death on a large scale, to serve state or other “higher interests,” is another aspect of fascism. We see that with millions of people dying every year in Africa and Asia, because pressure groups deny them access to energy, insect control, water purification, agricultural and other modern technologies, in the name of protecting the environment from dangerous climate change, chemicals and biotechnology.

There are crazy ironies, too. Google helps the Chinese Communist Government prevent its citizens from accessing “forbidden” knowledge and ideas – but then claims helping the US Defense Department with Cloud computing or artificial intelligence surveillance would “violate its principles.”

Around many neighborhoods, signs proclaim “Hate has no home here,” in multiple languages, with an American flag heart logo reminiscent of the Obama campaign logo – in liberals’ yards. The signs are part of a project that “promotes just and inclusive communities.” Trump supporters need not apply.

Democrats appear to be depending on all of this to counter a possible “red wave” – and regain control of the House of Representatives and maybe even the Senate. If they succeed even with just the House, Democrat congressional committees will investigate, interrogate and try to impeach Trump, Kavanaugh and other officials. They will impede and obstruct everything the Trump Administration tries to do.

They’ll also try to abolish ICE, block the Wall, pack the Supreme Court, take our guns, bash Israel – and replace the fossil fuels that provide 80% of our energy with “100% renewable energy” that is so expensive and unreliable it will bring our industries, economy and nation to its knees, while blanketing rural and habitat land, damaging people’s health and property rights, and butchering birds and bats by the millions.

Our rebounding energy, employment, economy, markets and living standards would get rolled back.

Victorious Democrats would also end congressional investigations into the Hillary-Deep State-DNC-Russian-Clinton Foundation collusion and corruption. All the players in these massive, sordid affairs will be deemed “too big to jail” – and too closely tied to the Democratic Party to be investigated further.

Some say the Antifa-Schumer-Pelosi-Clinton-Holder-Waters strategy will backfire. I hope that happens, because it would be disastrous if these people run Congress, America and our lives. But I won’t bank on it.

If you’re worried too (and you should be), get inspired and involved. Above all, VOTE! Vote to preserve our democratic Republic, our freedoms, our booming economy, reliable and affordable energy for all Americans – and equal justice for all, based on the presumption of innocence until proven guilty.