Paul Driessen
|
Posted: May 14, 2016 12:01 AM
Share   Tweet
The opinions expressed by columnists are their own and do not necessarily represent the views of Townhall.com. 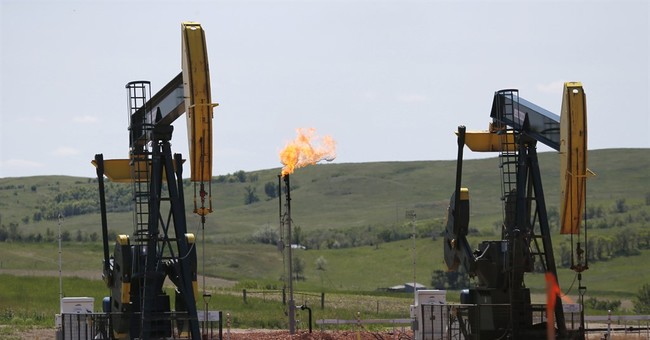 Rising ocean tides will bring “waves of climate refugees” to America and Europe, President Obama has declared. “Environmental migrants” are already fleeing shrinking islands in the Pacific, and it is a “dereliction of duty” for military officers to “deny the reality” of dangerous manmade climate change.

Even if we act in accord with the Paris climate “accords” (none dare call it a treaty) and “can stem the increase” in global temperatures, Interior Secretary Sally Jewell insists, “very rapid” climate changes “are expected to force the relocation of hundreds of Alaskans from their homes.”

Manmade climate change is a “threat multiplier,” a Pentagon report asserts. It will “exacerbate” many of the challenges the United States faces today, including infectious diseases and terrorism, destructive extreme weather events, disputes over who has rights to dwindling land areas and basic resources like water and food, and intense disagreements over how to absorb millions of climate refugees.

Echo-chamber journalists disagree only over the identity of America’s first climate refugees: Alaskan Natives in Newtok being inundated by rising seas and melting ice and tundra – or 25 Biloxi-Chitimacha-Choctaw families whose little island in the Mississippi Delta has been eroding away since 1950?

Not to be outdone, ultra-liberal radio talk show host Thom Hartmann told me, “You’ve got five million climate change refugees fleeing into Europe right now because of droughts in Syria.” When I called this nonsense and said they are trying to escape war and ISIS butchers who are beheading little children, for the tenth time in a ten-minute interview, he railed that I “should be in jail” as a “climate denier.”

Throughout Earth and human history, climate change has ranged from regional to hemispheric, from beneficial to harmful to destructive. It has included Roman and medieval warm periods, little ice ages, and five “mammoth” glacial epochs that buried continents under mile-high walls of ice. Natural climate change inflicted a Dust Bowl that sent millions of Americans scurrying in search of better lives, and decades- or centuries-long droughts that brought entire civilizations to their knees.

Roman, Mayan, Mesopotamian, Egyptian, Chinese and other cities and cultures prospered in warm periods and collapsed in cold and drought eras, climate historian Dennis Avery observes. This happened “over and over, in a centuries-long rhythm of affluence followed by long success, followed by long and utter failure.” Entire cities in the eastern Mediterranean were abandoned for centuries.

Storm activity rose by 85% in the second half of the 16th century, during the Maunder Sunspot Minimum, while the incidence of severe storms increased four-fold, writes historian Brian Fagan. British Navy logbooks show more than twice as many major land-falling Caribbean hurricanes during the cold decades of the 1700’s as during the warm years of 1950–2000.

Little ice ages and extended droughts brought crop failures and mass starvation, Avery notes. Rome shrank from a million inhabitants in its heyday to barely 30,000 a century later. The Mayan civilization plunged from perhaps 15 million to one million, as its cities were abandoned in a century-long drought.

Climate mood swings in the past 50 years have been far less dramatic than in previous millennia. Few people will have to flee the tiny portion of future climate change that might be attributable to humans.

The Climate Crisis Consortium ignores these eons, millennia and centuries of natural climate change. It wants us to believe Earth’s climate was stable and benign until the Industrial Age – and humans can now control climate and weather merely by controlling carbon dioxide levels. It’s all Hollywood nonsense.

Oceans have risen 400 feet since the last ice age glaciers melted. Pacific islands rose with them, as corals expanded their habitats with every new inch of sea water. Seas are now rising at seven inches per century – and EPA’s anti-coal Clean Power Plan would prevent barely 0.01 inches of rise over the next 100 years.

Greenland’s icecap is shrinking because of subterranean magmatic activity – not global warming. Arctic regions have long experienced warming and cooling cycles, as recorded by Francis McClintock and other whalers and explorers, dating back some 300 years. Polar bear populations are at an all-time high: 25,000.

Antarctic ice masses continue to grow, and the continent’s average annual temperature of minus-55 F means it would have to warm by 88 degrees year-round for that ice to melt. Even Al Gore in his wildest rants doesn’t say that is likely. So his beachfront home is safe from the 20-foot sea rise he has predicted.

Meteorologist Anthony Watts concludes that the only reliable long-term surface record comes from 400 official US rural thermometer stations that were never corrupted by location changes, airport heat or urban growth. Those stations show no significant warming for the past 80 years. The “record warming” we keep hearing about comes from data that have been “adjusted” or “homogenized” (ie, manipulated) upward to conform to computer model projections, IPCC proclamations and White House press releases.

Other studies have concluded there has been no increase in the severity or frequency of thunderstorms, tornadoes, hurricanes or winter blizzards for decades. Indeed, no Category 3-5 hurricane has struck the United States since October 2005 – a record lull that exceeds any hurricane hiatus since at least 1900.

Malaria was common in the USA, Europe and even Siberia until the 1950s, when window screens, DDT and better medical practices wiped it out. It has nothing to do with global warming or climate change. Its continued prevalence is due to incompetent health ministries that refuse to learn from past successes.

The notion that a warmer world with more atmospheric CO2 will bring crop failures and famines is sheer delusion. Higher carbon dioxide levels are actually “greening” the planet and making crops, forests and grasslands grow faster and better. New hybrid and biotech seeds, combined with modern fertilizers and farming practices, are yielding bigger harvests, even during droughts, as India is proving right now.

There is no manmade climate crisis. Solar, galactic and oceanic cycles rule – not carbon dioxide. The biggest threat to agriculture and humans would come from another little ice age, not moderate warming.

In reality, the enormous amounts of energy packed into coal, oil, natural gas and nuclear fuels create the wealth, and power the wondrous technologies, that give us the greatest advantages mankind has ever enjoyed – to survive, adapt to and deal with climate changes and weather events.

The worst thing we could do is lock up that reliable, affordable, compact energy – and switch to expensive, heavily subsidized, wildly unpredictable wind and solar energy … and to biofuels that require millions of acres of land and billions of gallons of precious water.

Those who control energy control lives, livelihoods and living standards. Allowing climate alarmists and anti-energy zealots to dictate what energy sources we can use, and how much each of us is “permitted” to have, would put all of us at the mercy of their unaccountable whims, ideologies and fraudulent science.

Their callous policies are already killing millions of people every year in impoverished nations, by depriving them of the energy and technologies that we take for granted. Do we really want to be next? Shouldn’t we be helping the world’s poor take their rightful places among the healthy and prosperous?

The only “evidence” the alarmists have for a looming climate cataclysm are Al Gore movies, Mike Mann hockey sticks, computer “scenarios” that bear no resemblance to Real World events, and more spin and scare stories from White House novelist Ben Rhodes.

We need a president who will send the Paris climate treaty to the US Senate, where it can be properly vetted and rejected … overturn EPA and other regulations that are based on manipulated data and falsified pseudo-science … and lead the world back from the precipice of climate lunacy.