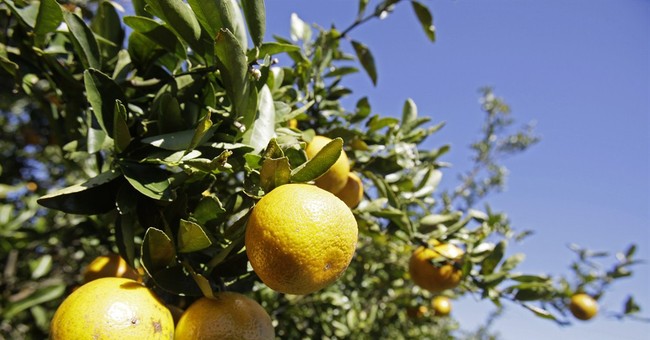 Florida’s citrus harvest has plummeted 60 percent from ten years ago, because of citrus greening disease, a bacterial infection that causes trees to produce stunted fruit and eventually die. The disease has also been found in one Los Angeles area orchard, potentially putting California’s citrusgroves at risk. Billions of dollars and thousands of jobs are at stake.

Introduced and spread by the flying aphid-like Asian citrus psyllid, citrus greening is also called HLB, from the Mandarin word for “yellow dragon disease.” It can quickly infest entire orchards, and thus far there is no cure. Infected trees must simply be destroyed.

Fortunately, a new pesticide called sulfoxaflor can prevent infections by killing psyllids. It is the only product other than neonicotinoid insecticides that protects valuable citrus trees against HLB. (Although technically in a different class, sulfoxaflor is similar to neonics.)

Unfortunately, a three-judge panel from San Francisco’s Ninth Circuit U.S. Court of Appeals recently banned the chemical’s use. This is the most liberal, most frequently overturned court in the United States. But its decision has forced the Environmental Protection Agency to cancel its approval of sufloxaflor’s registration, and ban the chemical’s sale and distribution in the United States.

Both the California and Florida citrus industries need this product if oranges are going to be kept off the endangered list. Can growers and state officials secure commonsense legal decisions before it’s too late?

The U.S. Environmental Protection Agency is extremely cautious about insecticides. Yet it approved sulfoxaflor, after discussing it with Canadian and Australian regulatory agencies and reviewing more than 400 studies, reams of data and many analyses of field tests examining effects on honeybees.

Not good enough, said the Ninth Circuit. Because “bees have been dying at alarming rates,” the judges said, they felt compelled to substitute their judgment for EPA’s – and revoke sulfoxaflor’s approval.

In the end, their chief objection came down to three measurements of pesticide residue in nectar and pollen – out of 132 measurements taken. Because this two percent of results barely exceeded EPA’s extremely conservative “level of concern,” and even though the detected residue amounted to only a few parts per billion (equivalent to a few seconds out of 32 years), the judges pulled the pesticide’s approval and told EPA to do more homework.

In reality, it is the judges who need to do more homework. Their decision failed to recognize several critical facts.

First, residue detection does not equal harm. Neonicotinoids – the insecticides that the court compared to sulfoxaflor – have not impacted honeybee populations. Real-world experience and extensive field studies demonstrate that bees thrive throughout millions of acres of neonic-treated canola grown in Western Canada. These pesticides are also widely used in Australia, where the bee industry is so healthy that it exports honeybee queens worldwide.

Second, bee populations are actually rising. The U.S. Department of Agriculture reports that America’s colony numbers have risen slightly, from 2.6 million in 2000 to over 2.7 million in 2014. They’re currently at a 20-year high in the United States, theWashington Post reports, and up 80% worldwidesince 1961.

The number of hives in Canada has also increased, even as neonic use grown. In Ontario, hive numbers rose from 84,000 in 1995 to 97,500 in 2013. Relatively high losses in Ontario over the frigid 2014/15 winter may reflect the fact that the province has a greater proportion of hobbyist beekeepers.

They try hard to maintain their hives, commercial keeper Lee Townsend observed. But “they’re not as current as commercial beekeepers,” who are generally more up to speed on how to protect hives. Bees are “how we make our money. This is how we support our families. There’s a big difference,” he says.

Third, media reports on wintertime bee losses may have made the judges think bees are in trouble. But beekeepers lose a certain percentage of their hives every year, and view losses around 19 percent as acceptable.

When losses are higher, such as 23 percent last winter, they can cause economic setbacks for some beekeepers. But most can quickly rebuild their hives in the springtime – a detail that many news stories leave out.

Many journalists also fail to recognize that worker bees live for only six weeks in the summer. The Ninth Circuit seems to have made the same errors, ignored experts and evidence, and listened mostly to anti-chemical activists who blame neonics for seasonal bee loss fluctuations.

Thankfully, beekeepers are managing these challenges better, despite how difficult it is to treat bees for parasites – basically killing bugs on bugs. While trying to address hive health problems, beekeepers have sometimes accidentally killed off entire hives through overuse or off-label use of pesticides.

Fifth, while some still have problems maintaining the health of their hives, experienced, attentive beekeepers are finding their profession is “more profitable than ever,” says independent researcher and beekeeper Randy Oliver. Bees are highly sought for pollination services, and prices are high.

Sulfoxaflor offers them a chance to survive. Its safety, effectiveness and unique insect-control mechanism make it especially valuable. Even the Ninth Circuit judges acknowledged this.

As entomologist Michael Rogers, director of the University of Florida’s Citrus Research and Education Center, recently told the Lakeland Ledger: If they don’t have sulfoxaflor, “the alternatives growers would use would be more toxic” to bees that pollinate so many crops.

“Neonic crop protection is currently the only thing we have that can ensure the citrus industry survives citrus greening long enough to be rescued by genetic engineering,” Rogers adds. Ironically, many of the groups battling neonics also oppose biotechnology.

The White House’s recent National Pollinator Health Strategy emphasized the need to “balance the unintended consequences of chemical exposure with the need for pest control.” The Ninth Circuit ignored that guidance and let fear and misinformation triumph over facts.

California and Florida growers and agricultural agencies should pursue legal remedies that regain their sulfoxaflor option, before psyllids and HLB destroy the nutritious citrus fruits we love. Thankfully, the Ninth Circuit just granted EPA’s request for a panel rehearing on its decision to ban the chemical.

Growers and other affected parties should at least file “friends of the court” briefs, to ensure that the judges are aware of all the relevant facts before it renders a new decision.