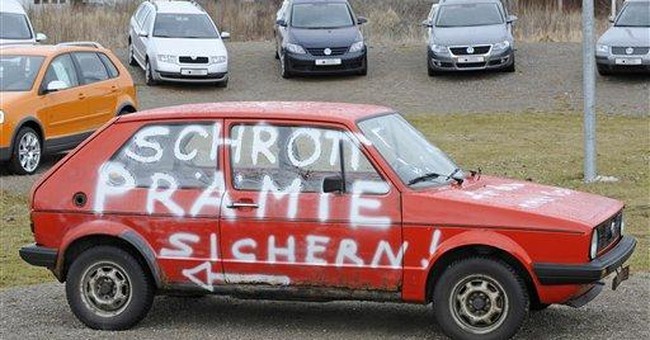 In the minds of politicians and rent-seekers, the cash-for-clunkers program was so successful that it deserved even more taxpayer money.

Pols got to strut their green credentials. Car makers got to sell cars, via yet another subsidy. Consumers got free cash for new cars they otherwise wouldn’t buy.

It’s all so socially responsible and win-win – except for cash-strapped taxpayers, who got saddled with still more debt. Another big loser of course is the antiquated notion that public policies should be based on sound science and economics.

An ice-cold bucket of reality is in order – before the next clunker idea comes along. Here are a few of the more obvious problems with pulling the plug on grandma cars.

The “high-polluting” cars that taxpayers are paying to get off the road already have 90% lower emissions than 1970-era models. So the pollution reductions are truly marginal, as are the gas savings.

Any gas savings will be more than offset by the latest round of oil and gas lock-ups that Congress and the White House are already engineering. So more oil imports are on the way.

Every “clunker” has to be rendered totally inoperable. Sodium silicate gets poured into engines to freeze their components, then they’re crushed into bundles of scrap.

That means some 750,000 perfectly good cars never make it to used car lots. People who can’t afford the average $24,000 new car price have to buy a new car anyway. Used car dealers and buyers have dwindling numbers of cars to bargain for. Repair shops lose business.

Even worse, trashing all these cars is a monumental waste of precious resources – and all the energy and effort it took to extract metallic ores, hydrocarbons and other raw materials from the Earth, process and refine them, create alloys and plastics, and turn them into engines, chasses, windows, tires and interiors.

Every step in that process took enormous amounts of energy – and emitted vast quantities of carbon dioxide, other greenhouse gases and real pollutants. There is absolutely no way that these emissions and energy will ever be recouped by any savings the replacement cars might conceivably generate.

It’s like spending $720,000 for photovoltaic solar panels on the roof of the Denver Nature and Science Museum. The panels would certainly reduce conventional electricity bills. But it would take 110 years to save enough on those bills to pay for the panels – and the panels would only last 30 years.

Denver installed the panels for one reason, observes Independence Institute investigative journalist Todd Shepherd. Federal taxpayers provided a fat subsidy – enabling President Obama to have a great photo-op on the museum roof and shill for solar power, with the Rocky Mountains resplendent in the distance.

So much for that win-win scenario. The next clunker boondoggle is already on the launch pad, courtesy of T. Boone Pickens and Ted Turner. As they opined in the Wall Street Journal recently, they want to repeat the automotive “success” on a massive scale – replacing “clunker” electrical generating plants with government-mandated gas-fired versions.

The existing plants burn coal, which America has in great abundance, and which keeps electricity reliable and affordable – so that people can heat and cool their homes, industries can manufacture and transport products, companies can employ workers, hospitals can treat patients, schools can train future innovators, and America can ensure continued opportunity and prosperity.

Pickens, Turner, Gore, Hansen and Obama insist that CO2 is causing “potentially devastating climate changes.” Thousands of scientists disagree, and satellite data clearly demonstrate that global temperatures have been stable or even decreasing since 1998, even as carbon dioxide levels have risen steadily. Storms, droughts, floods and other events are in accord with historic variations, and show no statistically significant upswings, note climatologists William Gray and David Legates.

But inconvenient facts and observations are irrelevant to climate alarmists. They apparently believe that assuming, asserting, decreeing and modeling climate disasters proves a crisis is nigh – and we must make painful energy, economic and lifestyle sacrifices to prevent it.

In other words, force America to eliminate existing generators and switch to power plants running on natural gas that Boone Pickens, Chesapeake Energy and a few others own in abundance – and to wind and solar power that General Electric, Vesta and other “ethical” companies will happily provide, if taxpayers fork over billions in subsidies.

These “socially responsible” rent seekers and their friends in Congress and the White House are masters at increasing and mandating demand for natural gas – for transportation, homes, industries and power generation. Unfortunately, the friends aren’t so attentive to the supply side of the equation. They excel at locking up America’s onshore and offshore energy prospects, and imposing burdensome new regulations on lands that aren’t off limits – making it increasingly difficult to find and produce gas.

This increases demand, shrinks supplies, drives up prices, and increases profits for the lucky few who do own abundant gas supplies. Once again, consumers and taxpayers get taken for a ride.

Once again, it’s even worse from an economic, ecological and resource conservation perspective. We are being asked to destroy dozens or hundreds of perfectly good coal-fired power plants – or retrofit them under expensive carbon capture and storage mandates – simply because some special interests assume, assert, decree and model global warming disasters.

Tearing the plants down would be a monumental waste of the resources, energy, effort and emissions it took to build them. CCS technology would require billions of dollars, 25% of a power plant’s generating capacity, major increases in fuel consumption and electricity prices, thousands of miles of CO2 pipelines and massive underground storage chambers, to reduce global CO2 by an imperceptible amount.

What America has today is government by lawyers, ideologues, social engineers and rent seekers. Congress has nary a real engineer, and precious few members with any business background or ability to figure out basic cradle-to-grave energy, resource, economic and pollution equations. House Speaker Nancy Pelosi didn’t even know natural gas is a fossil fuel.

With these folks at the helm, it may be time for wise investors to look toward China and India, where reducing poverty and improving living standards guide public policy – not Hollywood movies about Climate Armageddon. Wise voters and taxpayers will join the Tea Party movement, and elect some honest brainpower, before Congress wreaks more havoc on energy, jobs and civil rights.