Who Are the Real Russian Agents?

Paul Curry
|
Posted: Jul 25, 2019 12:01 AM
Share   Tweet
The opinions expressed by columnists are their own and do not necessarily represent the views of Townhall.com. 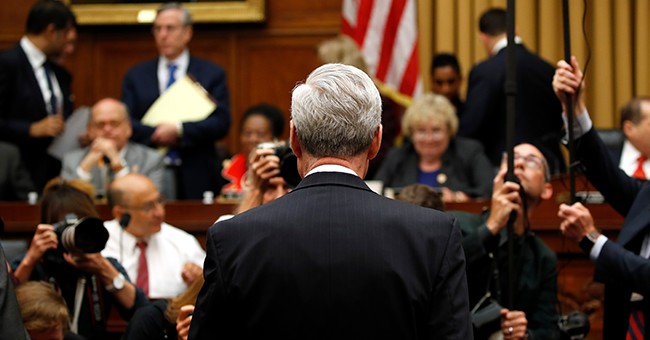 On Wednesday, when Special Counsel Robert Mueller took to Capitol Hill for his much anticipated and overly hyped testimony, we witnessed the culmination of three years of Russian collusion hysteria come and go with an anti-climactic whimper. What we did not see was any evidence whatsoever of President Trump, or of his campaign, conspiring or colluding with Russia. We did not see the smoking gun Rep. Adam Schiff had consistently promised to unveil. What we did see was, hopefully, the final gasp of zealots pushing a Machiavellian-like, Russian conspiracy narrative, all the while serving unwittingly as Russian operatives.

For those who choose to forget, Christopher Steele, author of the infamously false Steele Dossier, was, in fact, a foreign agent. A former British intelligence officer, fired by the FBI, who conspired and colluded with numerous Russian sources to compile the “unverified” dossier was hired by the Democratic National Committee at the behest of the Clinton campaign. Through Fusion GPS, Steele sent the dossier via Fusion employee Nellie Ohr to Justice Dept. lawyer Bruce Ohr, Nellie’s husband, in the notorious “Hi honey” emails. And from there on to the FISA Court and the dubious decision to spy on Trump advisor Carter Page and other members of the Trump campaign. Who here is serving the interests of foreign actors by undermining faith in the electoral process?

Following their inability to make any Russian collusion narrative stick to the Trump campaign, Democrats quickly moved on to one of obstruction of justice. Of course, obstruction of justice is much harder to prove than conspiracy, and thus harder to disprove. No doubt the reason for the left’s prompt change of direction once conspiracy claims disappeared like dust in the wind. President Trump’s firing of FBI Director James Comey along with his apparent displeasure with what he believed to be a frivolous investigation have consistently been cited as evidence of obstruction.

Yet, as Congressman Greg Steube pointed outduring the hearings, the president can fire the FBI Director whenever he so chooses, and, most importantly, Mueller himself was never fired or interfered with, and allowed to conduct his Democrat staffed investigation on to conclusion. By continuing to drive a false narrative of obstruction of justice, who here is serving the interests of foreign actors in undermining faith in democracy?

‘No one is above the law’ has become an all too familiar chant from members of the left. A seemingly never-ending talking point from Democrats crusading for justice in the face of the injustice that is the Trump administration. But to whom does this apply? Merely the president who complied with a two-year investigation or to others who have smashed cell phones, wiped servers, deleted emails and conspired with foreign agents during a presidential election? Whose interests are served by continuing on with the false and ultimately pointless narrative.

Donald Trump did not win in 2016 because of any Russian conspiracy. He won because his opponent neglected Michigan and Wisconsin. He won because his opponent proudly declaredof working class Americans, “We're going to put a lot of coal miners and coal companies out of business.” He won by beating his opponent, not cheating his opponent. The tireless calls for impeachment, to undo a fair and democratic election, do not serve the interests of, or faith in, democracy, but they might serve other foreign interests.

The consistent chants of some Russian conspiracy or obstruction of justice do not serve any legitimate American interest. They do not further discourse or enable bipartisanship. But they do serve the interests of foreign actors whose goal it was to undermine faith in our elections. Be it as Russian pawns, foreign agents or, what Stalin might have referred to as “useful idiots,” those continuously screaming collusion and obstruction while clamoring for impeachment are the ones truly serving as Russian agents.