Paul Curry
|
Posted: Jun 26, 2019 5:55 PM
Share   Tweet
The opinions expressed by columnists are their own and do not necessarily represent the views of Townhall.com. 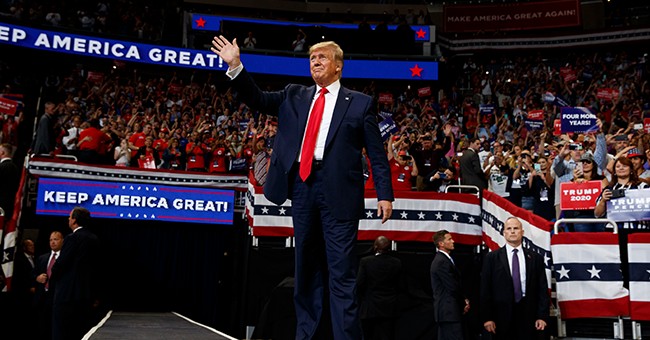 When your enemy is on the path to self destruction, stay out of his way. This axiom, most often attributed to Sun-Tzu’s The Art of War, and repeated in variations from every successful General from Napoleon through to today, is as useful in the current Presidential race as it was 2,200 years ago. And President Trump would do well to take heed.

The Democratic nominating contest officially kicks off this week with the first of what will be many debates. Rumor has is it that President Trump plans to live tweet during the progressive pageantry. And presumably, throughout the campaign. With all respect, this would be a huge mistake.

President Trump is faced with the single most unique opportunity in American political history. He does not appear on a ballot for 20 months. Yet he is provided with 20 months of 20-plus contenders, all in unison, making the case for his reelection.

Bear with me on this.

The Democratic debates are all but certain to be, not simply a foot race, but a full-on Olympic sprint to the left. Each candidate proudly touting their own (yet suspiciously similar) version of social justice and economic reform, which amounts to nothing more than socialism at its very core. A marathon of socialists masquerading as proud progressives, each trying to outdo the other’s leftist credentials. And yes, President Trump should let them.

As much as I respect and admire Benjamin Franklin, he was only partly correct. There are in fact three certainties in life. Death, taxes, and, the fact that CNN, MSNBC and the rest of the left-wing media will hail any proposal coming from the Democratic field as assured utopia. And this is a good thing for the President. They will put any such proposal (or scheme) on their 24-hour news cycle. Every American will hear it.

While the contenders extol the false idol of socialism, the American economy, our economy, the Trump economy continues to soar. While they snidely chide the China tariffs and trade fight, Trump fights for fair trade to the benefit of the old U.S.A. and its abused farmers. As the left longs for the years of Obama-Biden Iranian appeasement, Trump continues to take the Ayatollah to task.

Add to the above, as Townhall’s Katie Pavlich reports, the non-candidates, but social media faces, of the Democrats, Ilhan Omar and Alexandria Ocasio-Cortez, now want taxpayers to pay for their student loan debt. Voters notice these things.

But keep your powder dry Mr. President, for now. Americans are watching and keeping score.

By engaging in live tweeting the debates or injecting ‘Trump vs. ---’ adds unearned validity to their preposterous claims. The Democrats’ proposals are so inane that they are laughable on their face. And when a proposal is so laughable, mentioning it, let alone debating it, only allows for an opportunity to improve it (if even possible).

The President should wait one year. Bide his time. Take a year of your opponents racing to the left and tearing each other apart in the process while he works for the American voter. Watch with patience while the mainstream media celebrates ad nauseum every new proposal to bankrupt the country and embolden our enemies.

And finally, when the Democratic field is whittled down to one socialist left standing at the foot of a statue of their great Saint Marx, then, cry havoc, and let slip the dogs of war!

By the general election, whomever the nominee may be, they will be inexorably linked to the leftist policies they either proposed or embraced to secure the nomination. Then, it becomes simple logic.

A soaring Trump economy versus historically failed socialist policies. Fair trade with China over fifty years of self-allowed trade abuse. A restrained, non-nuclear Iran as opposed to the days of billions of dollars laid at a terrorist nation’s feet. Basically, four more years.

Mr. President, your enemies are on the path to self-destruction. For the love of America, stay out of their way.