Is a Trump Court in the Making?

Pat Buchanan
|
Posted: Jul 09, 2018 8:15 PM
Share   Tweet
The opinions expressed by columnists are their own and do not necessarily represent the views of Townhall.com. 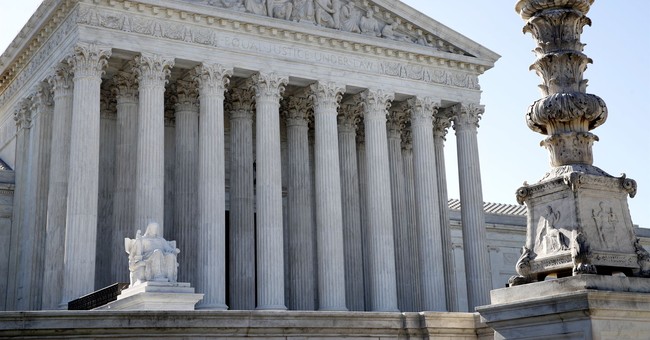 If Mitch McConnell's Senate can confirm his new nominee for the Supreme Court, President Donald Trump may have completed the capture of all three branches of the U.S. government for the Republican Party.

Not bad for a rookie.

And the lamentations on the left are surely justified.

For liberalism's great strategic ally and asset of 60 years, the judicial dictatorship erected by Earl Warren and associates, may be about to fall.

Judicial supremacy may be on the way out.

Another constitutionalist on the court, in the tradition of Antonin Scalia, could ring down the curtain on the social revolution the court has been imposing since the salad days of Chief Justice Earl Warren.

Among the changes Warren's court and its successors succeeded in imposing: The de-Christianization of all public institutions in America. The social war of the 1970s over forced busing for racial balance in the public schools. The creation, ex nihilo, of new constitutional rights, first to an abortion, and then to homosexuality and same-sex marriage.

But while the confirmation of a new Trump justice may bring an end to the revolution, it will return power to where it belongs in a constitutional republic, with elected legislators and elected executives.

There will not likely be any sudden and radical rollback of changes wrought in six decades. For some of those changes have become embedded in the public consciousness as the new normal, and will endure.

Roe v. Wade may be challenged. But even if overturned, states like New York and California, which had liberalized abortion laws before Roe, are not likely to re-criminalize it.

Affirmative action, however, racial discrimination against white males to promote diversity, may be on the chopping block.

Why did it take until Trump to restore constitutionalism to the Supreme Court, when the Warren Court had been a blazing issue since the 1950s and Republicans held the presidency for 28 years from 1968 to 2016, and had managed to elevate 12 justices?

Answer: Every GOP president save Bush II, has appointed justices who grew to believe the court had a right to remake America to conform to their image of the ideal liberal democracy. And they so acted.

Said Ike ruefully on his retirement: Two of my worst mistakes are sitting up there on the Supreme Court.

The two were Warren, who, as California's governor, had pushed to put Japanese-Americans in concentration camps in World War II, and William Brennan, the most radical justice to sit in over half a century.

Nixon came to office committed to rein in the court by naming "strict constructionists." Yet three of the four justices he named would vote for Roe v. Wade in 1973. Harry Blackmun, whom Nixon rushed onto the bench after his Southern nominees Clement Haynsworth and G. Harrold Carswell were trashed and rejected, became the author of Roe.

Nixon's fourth nominee, William Rehnquist, was his best, a brilliant jurist whom Reagan himself would elevate to chief justice.

But when his effort to elevate Judge Robert Bork failed, he turned to Anthony Kennedy of California, whose seat Trump is filling today.

Over 30 years, Kennedy's vote proved decisive in 5-4 decisions to uphold Roe, to discover homosexuality as a constitutional right, and to raise same-sex unions to the legal level of traditional marriage.

George H.W. Bush's first choice was David Souter, who also turned left to join the liberal bloc. Bush I got it right on his second try in 1991, naming the constitutionalist Clarence Thomas.

As for George W. Bush, he chose John Roberts as Chief Justice to succeed Rehnquist and then Sam Alito as associate justice.

Democratic presidents have done far better by their constituents.

Clearly, the advisers to George W. Bush and President Trump looked back at the successes and the failures of previous GOP presidents, and have done a far better job of vetting nominees. They reached outside for counsel.

It was Trump's 2016 pledge to draw his nominees to the high court from a list of 20 judges and scholars supplied by the Federalist Society that reassured conservatives and helped him unite his party and get elected.

On the issue of judicial nominees and justices to the Supreme Court, Trump has kept his word.

And the next Supreme Court may one day be called the Trump Court.