Bush Republicanism Is Dead and Gone

Pat Buchanan
|
Posted: May 06, 2016 12:01 AM
Share   Tweet
The opinions expressed by columnists are their own and do not necessarily represent the views of Townhall.com. 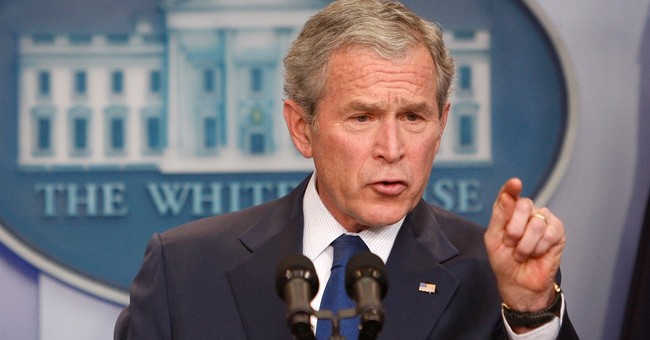 "The two living Republican past presidents, George H. W. Bush and George W. Bush, have no plans to endorse Trump, according to their spokesmen." So said the lead story in The Washington Post.

Graceless, yes, but not unexpected. The Bushes have many fine qualities. Losing well, however, is not one of them.

And they have to know, whether they concede it or not, that Trump's triumph is a sweeping repudiation of Bush Republicanism by the same party that nominated them four times for the presidency.

Not only was son and brother, Jeb, humiliated and chased out of the race early, but Trump won his nomination by denouncing as rotten to the core the primary fruits of signature Bush policies.

America has run up $12 trillion in trade deficits and been displaced as the world's first manufacturing power by China, said Trump, because of the lousy trade deals backed by Bush Republicans.

The greatest strategic blunder in U.S. history, said Trump, was the Bush II decision to invade Iraq to disarm it of nonexistent weapons of mass destruction.

That is a savage indictment of the Bush legacy. And a Republican electorate, in the largest turnout in primary history, nodded, "Amen to that, brother!"

No matter who wins in November, there is no going back for the GOP.

Can anyone think the Republican Party can return to open borders or new free-trade agreements like NAFTA?

Can anyone believe another U.S. Army, like the ones Bush I and Bush II sent into Afghanistan and Iraq, will be mounted up and march to remake another Middle East country in America's image?

What the Trump campaign revealed, as Republicans and even Democrats moved toward him on trade, immigration and foreign policy, is that Bush Republicanism and neoconservatism not only suffered a decisive defeat, they had a sword run right through them.

They are as dead as emperor-worship in Japan.

Trump won the nomination, he won the argument, and he won the debate. The party is now with Trump -- on the issues. For GOP elites, there can be no going back to what the grass roots rejected.

What does this suggest for Trump himself?

While he ought to keep an open door to those he defeated, the greatest mistake he could make would be to seek the support of the establishment he crushed by compromising on the issues that brought out his crowds and brought him his victories and nomination.

Given Trump's negatives, the Beltway punditocracy is writing him off, warning that Trump either comes to terms with the establishment on the issues, or he is gone for good.

President Gerald Ford was down 33 points to Jimmy Carter in mid-July 1976, but lost by only 2 points on Election Day.

What this suggests is extraordinary volatility of the electorate in the modern age. As this year has shown, that has not changed.

How then should Trump proceed?

Unify the party, to the degree he can, by keeping an open door to the defeated and offering a hand in friendship to all who wish to join his ranks, while refusing to compromise the issues that got him where he is. If the Bushes and neocons wish to depart, let them go.

Lest we forget, Congressman John Anderson, who lost to Reagan in the primaries, bolted the party and won 7 percent of the national vote.

Ted Cruz, who won more states and votes than all other Trump rivals put together, should be offered a prime-time speaking slot at Cleveland -- in return for endorsing the Trump ticket.

As the vice presidential nominee remains the only drama left, Trump should hold off announcing his choice until closer to Cleveland.

For while that decision will leave one person elated, it will leave scores despondent. And the longer Trump delays his announcement, the more that those who see themselves as a future vice president will be praising him, or at least holding off from attacking him.

Ultimately, the Great Unifier upon whom the Republican Party may reliably depend is the nominee of the Democratic Party -- Director James Comey and his FBI consenting -- Hillary Rodham Clinton.