Why Is Yemen Our War? 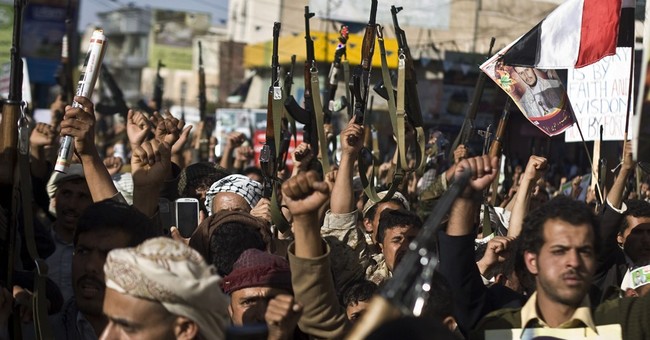 For a month now, the Saudi air force has been bombing Yemen to reverse a takeover of that nation of 25 million by Houthi rebels, and reinstall a president who fled his country and is residing in Riyadh.

The Saudis have hit airfields, armor and arms depots, and caused a humanitarian catastrophe. Nearly 1,000 dead, 3,500 wounded and tens of thousands homeless. The poorest nation in the Arab world is near collapse. Dependent upon imported food, Yemen faces malnutrition and starvation.

And the United States has been an accomplice in the Saudi bombing of Yemen.

Why? Why is Yemen's civil war America's war?

What did the Houthis ever do to us?

While they bear us no love, their Houthi rebellion was an uprising against a pair of autocrats who had been imposed upon them, and against al-Qaida in the Arabian Peninsula.

Why are we then making ourselves de facto allies of al-Qaida?

For while the Saudis have been bombing the Houthis, easing the pressure on al-Qaida, AQAP effected a prison break of 270 inmates, including scores of terrorists, and seized the port of Mukalla.

The Saudis claim the Houthi rebellion is part of an Iranian Shiite scheme to overrun and dominate the Sunni Middle East.

But Pakistan is not buying it, and not sending troops. The Egyptians seem reluctant to enlist. Nor is there hard evidence Iran armed or incited the Houthis who have been fighting for years. Tehran reportedly advised the rebels not to take the city of Aden, and is calling for a ceasefire and peace talks.

Saudi propaganda portrays the Middle East as caught up in a great Muslim struggle, with a Shiite Crescent led by Iran seeking to swallow up the Sunni states.

But is this true? Or is America being dragged into fighting yet another war where we have no vital interest, against an enemy that has not attacked us and has no plans to do so?

In today's chaotic Middle East, who are our real enemies, those attacking and killing Americans and murdering our friends?

And who is most fiercely resisting these enemies of ours?

The Saudis? The Gulf Arabs? Our NATO ally Turkey?

By no means. All, at one time or another, have abetted the al-Nusra Front or ISIS in Syria. And none has sent troops to fight the Islamic State in Iraq.

Yet the Houthis, two of whose mosques in Yemen's capital were blown up in March by ISIS, with 135 dead and 350 wounded, have been actively battling these terrorists.

In Iraq, it is Shiite militias, admittedly no friends, Iranians, and Kurds who have been aiding Baghdad in battling the Islamic State.

It is Hezbollah and Iran who have been backing Damascus with arms and troops in Bashar Assad's war against ISIS and the al-Qaida affiliate.

When it comes to battling our enemies, our Sunni friends have been dragging their feet, or even collaborating. But the Shiite Crescent we are supposed to fear as the new Persian Empire has been actively fighting those same enemies.

In his Wall Street Journal column on the Middle East, Yaroslav Trofimov reports that the Saudis are euphoric over their successes in bombing the Houthis, and are looking forward to new wars:

"This display of military might has already unleashed patriotic fervor in Riyadh. It has spurred talk that once the Houthis are dealt with, Saudi Arabia's Sunni coalition should move against a more formidable Iranian ally, the Syrian regime of Bashar al-Assad, and destroy the Syrian air force.

"'The massacres in Syria should stop and its regime there should go,' said Khalid al-Dakhil, a Saudi sociologist and prominent commentator. 'The right thing to do after Yemen would be for the Gulf countries and Egypt, Jordan and Turkey to go into Syria to dislodge that regime.'"

First, while the Houthis have been bloodied they are not beaten. The Saudis may have just thrown a rock into a hornets' nest.

Second, how would Hezbollah, Iran, Iraq and Russia respond to a Saudi-led war to overthrow their allies in Syria?

Third, if Bashar Assad falls in Syria, who rises to power if not the al-Nusra Front and ISIS, the only effective forces opposing him today?

Terrible as is the war that Assad is waging in his own country, is not his regime preferable to what ISIS in Raqqa and al-Nusra in Idlib have on offer to us?

Reportedly, the Americans are trying to coax the Saudis out of their war in Yemen.

Wise move. Kings don't tend to last in long wars, especially in wars they themselves have started.