Obama’s Salary Should be Applied to Bailout $$$ 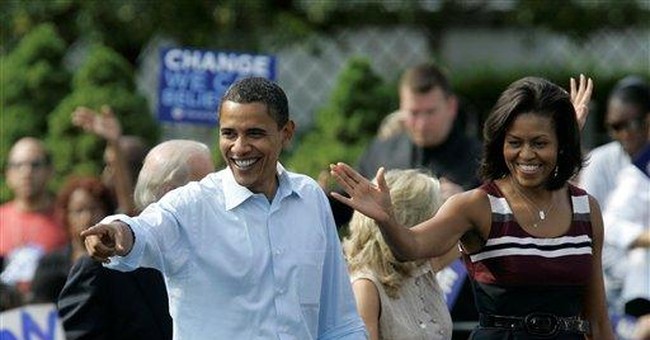 If you had an employee who was getting $160,000 a year, plus a full time staff, travel expenses, and a huge budget to work with, but never showed up for work, what would you do? Obama proudly lists on his resume that running for President is the most substantial thing he has ever accomplished. I am sure that his campaign manager must be surprised by that bit of hubris. What has he done though to earn $320,000 the past two years while he has been paid for being a Senator? It suggests that the position of senator is not that important and can be put on hold for two years to travel the country, raise money, give speeches and be adored by the liberal media.

And his response to McCain returning to DC to actually punch the time clock and have an impact on the debate about the economy is met with snide comments about being able to multi-task. That’s sort of like a guy playing golf, getting a note that his wife is in the hospital saying he can multi-task by continuing to play while calling=2 0her on the phone to wish her well. The good husband rushes to her side.

If Obama cared as much about this economic crisis as he cares about winning this campaign, he would have denounced his economic advisors, Franklin Raines and James Johnson as being part of the Enron-like crisis where no mercy was spared to annihilate those involved in that scandal. And for years it continued to be a centerpiece of the trash Bush and Republican policy that the Democrats so proudly crafted. Now, the only sound that can be heard over the wringing of hands, is the cash register logging in the millions of dollars that these two and others have walked away with while leaving the regular taxpayer to hold the bag. How populist is that Obama?

Here is an easy solution to this economic crisis, and I give Planned Parenthood the credit for making it so crystal clear. They announced that because of the economic crisis they are going to give out free abortions for a while. That’s right, throw those babies at the Baal worshippers hoping to appease the “god of good economy”. I think the ancients who brought us child sacrifice would be proud of that very barbaric solution. But why not defund Planned Parenthood and apply that money to the crisis? Then take every single earmark that was just passed by congress and put that on the balance sheet representing less money the taxpayers have to cough up for this unbridled greed and corruption.

Don’t stop there. What is HUD’s budget? And what does HUD do besides make sure that the government can dictate to a property owner who they can and can’t rent to. Close that useless agency and add that money to the crisis column. Convert that government building into high priced condos so that it actually serves an income pro ducing purpose.

The Department of Energy? What does it accomplish other than preventing us from drilling for oil in our own country to achieve oil independence? What really is the purpose of that agency and dozens of others like it that sit on prime real estate in the nation’s capitol, devising ways to curtail liberties and impose greater restrictions and regulations on us. What does HHS do besides employ thousands of people who could be working in the private sector if the government would lower taxes, reduce regulations on small businesses and do what it was designed to do which is protect us from assault . . . foreign and domestic, providing an atmosphere of tranquility and growth.

If you took the entire budget of HHS, which is larger than many countries in the world, divide it by the number of families it claims to help with its plantation handouts, and provide an advisor fo r each one, it would not only save the taxpayers millions, but it would bring an end to a totally failed system that has institutionalized dependency and served to rob people of their dignity and freedom. Oh, and convert that building into low income housing where each family is responsible for paying rent . . . from the new jobs they will get once the restriction for them finding work has been lifted.

These government agencies have either robbed freedoms from the citizens, or they have enabled citizens to continue with irresponsible behavior, rewarding them at every turn. It’s sort of like Obama saying he wants to give the UN almost a billion dollars more to help end poverty in the world, when he can’t even pull out his own checkbook and help his own brother who is living on less than $10 a month in Africa.

So, if you take out all those earmarks and special interest giveaways that are in the budget and fire candidates who are on the government payroll while pursuing their own careers, close abusive and oppressive government agencies, tell the UN that you will only pay the bare minimum to be a member since you have only one vote, like a country that pays $10,000 a year to belong, allow drilling off the coast to bring the cost of gas down, and start selling a lot of the real estate that the government has acquired through the centuries . . . they wouldn’t need an economic bailout or stimulus package, because all of that would solve the problem.

What is Barack Obama’s solution? To insist upon a debate because the country deserves to hear his eloquence. Heh, earth to Barack . . . we have been hearing from you for two years now and it is getting old, tiresome and redundant. Other than adding a few more states to the union, you really haven’t done or said anything that would have us believe that one more debate will reveal a unique thought. Give it up. It is hard to break it to a self-proclaimed messiah that there really is an issue bigger than you.