John McCain's Trifecta on the Road to Victory 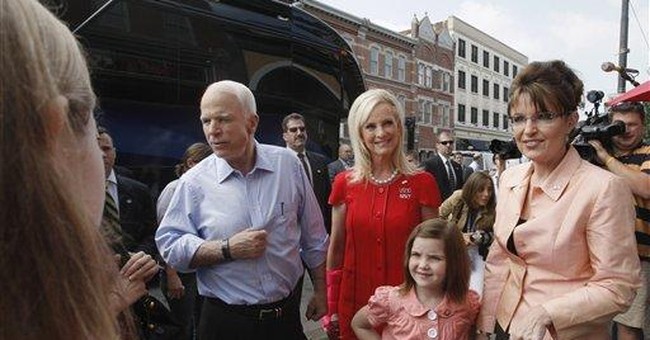 John McCain has just experienced a political Trifecta garnering the coveted conservative base that is absolutely necessary for any Republican to win an election. It is the very oxygen of the party i n much the same way liberals are the core of the Democratic Party.

The first win for Senator McCain that shook his slumbering base was the Saddleback Forum where his direct answers that revealed conviction and resolve stood in sharp contrast to Barack’s fumbled, arrogant, non-answer responses. So distraught was the left that=2 0they had to create an immediate spin that McCain had the answers before hand. Although that has totally been disproved, let’s run out that scenario and look at the idiocy of it.

First of all, you would have to be totally out of touch with reality to not think a question on abortion would be asked at a religious forum. Either get new advisors, or go into a different line of work that’s not above your pay grade. But let’s say that McCain did have knowledge that an abortion question would be asked. Advisors and handlers to politicians work diligently to make sure their candidate never answers a question directly, but handles it with obscure nuances that seem wonderful on the surface but when transcripts are read, there is no there there. If McCain’s advisors had seen that question they would have briefed him on a more eloquent answer, inste ad, he answered the question of when life begins, from his heart, when he simply said, “conception.”

So, if he had been alerted that, shock, there was going to be an abort ion question, he realized he didn’t have to spin an answer to appeal to a broad base of voters, he just had to answer it honestly and forthright, and that is what ticked the Obama people off. Heh wait, that’s not allowed . . . he didn’t do that obscure nuanced thing like our candidate does, and it gives him an unfair advantage, so we better spin it that he had the questions first. Talk about sore losers. But the real winners were not only McCain, but his base that finally saw the resolve they had been waiting for.

The second laurel wreath for McCain was the Republican platform that has in the past few election cycles, been a blood bath between the right to life group and the liberal, pro-abortion wing of the party. Always the life plank is at risk of being sawed off, and always a small remnant of determined warriors ride in to save the day. That was good news for conservatives and hope was once again in the air.

But the coup de grace, the Kentucky Derby, Wimbledon, Olympic Gold for John McCain was his selection of Governor Sarah Palin as his running mate.

I just happened to be in the Petri dish of political experimentation with almost 300 conservative leaders from around the country who were gathered for a meeting. The speaker was interrupted to pipe in the live feed of the announcement. The discussion in the group for three days before the announcement concerned who the pick would be and what the response would be if it was x, y or z. The responses varied depending upon the possible choice from, “I refuse to vote for that ticket,” to “Is it too late to form a third party?” to, my own which was, “Let’s select a write-in candidate and do a protest vote.” If you have been reading my columns, you know that is what I have been saying.

So, imagine our surprise when not only Sarah Palin was announced as McCain’s VP candidate, but that the whole room erupted in thunderous, standing ovation support. It was as though everyone in the room had a horse in the race and that collective horse made it over the finish line as the clear winner. Women were crying, men were high-fiving, everyone was hugging and celebrating because now . . . they had a ticket they could get behind, they could believe in, and they could enthusiastically support.

Those leaders represent millions of people around the country and several, including me, have since made public announcements that they have switched from an adamant position of not supporting McCain to being excited about the race.

No wonder the trash machines were in the streets within minutes to dump on Governor Palin and declare she was not experienced enough to be Vice President, but they still can’t explain why Barack is experienced enough to be President when his resume total ly pales in comparison to hers. Even though she is not running against him, they seem more concerned about=2 0her than they are about McCain and for good reason. She is young, dynamic, effective, principled and tough. Several in that group of leaders likened her to Maggie Thatcher, which of course means the liberals, the feminists, the good ol’ boys, will do everything they can to destroy her, but the harder they try, the more entrenched her base will become because we will all see this as a unified attack on us. We will take those attacks personally and fight back in a phalanx of solidarity with a woman who could be destroyed by a hypocritical machine that pretends to want women and blacks to rise to levels of leadership . . . but only if they can be manipulated and exploited by that machine.

But, let’s look at other groups that have been sitting on the sidelines trying to decide if they should vote for Barack or McCain. There are millions and millions of people in rural America who share the same values with McCain but who are slowly being seduced b y the empty idea of change. The seduction is possible because there is nothin g substantive to hold them to the concept of status quo. What the Governor Palin nomination said in words louder than empty slogans was, “If change is what you want . . . change is who we are.”

Here is a young, hockey mom, turned PTA leader, local elected official turned mayor, turned Governor who has challenged the Democrat AND Republican status quo and brought ethics back into the equation. She is a card carrying member of the NRA and member of a union, both of which will appeal to the blue collar worker who always feels dissed by the liberal elite as they cling to their guns and Bibles. Now they can vote for someone just like them.

There are more guns in America than people and more gun owners than the total number of people who usually vote in presidential elections. They own guns for many reasons and are tired of being classified as right wing nuts by the liberal elite, when ironically, many gun owners are liberals. Protecting the Second Amendment is a key issue for many Americans and it could be the deciding factor in this election.

Millions of women who are upset with the way Hillary was treated, whether or not they would vote for her, are encouraged to see a young, articulate, attractive woman be selected by a man who could have chosen anyone to be his running mate, but chose a fellow maverick, who does what is right, not was is expedient, and pays the price for such principled decisions.

With over 55% of the population strongly in the pro-life camp, and over 90% agreeing that partial birth abortion should be illegal, it is going to be much easier for McCain to rally the troops and bring it over the finish line. But he has to keep moving forward, keeping his newly reconciled base around him at all times, and not back down or be intimida ted by the tiresome tactics of the left. It is like running a race . . . don’t look back, don’t look down . . . keep looking forward, looking ahead and moving closer to the finish line and to ultimate victory.