Russia Predicts a Ukrainian Surrender in 2015 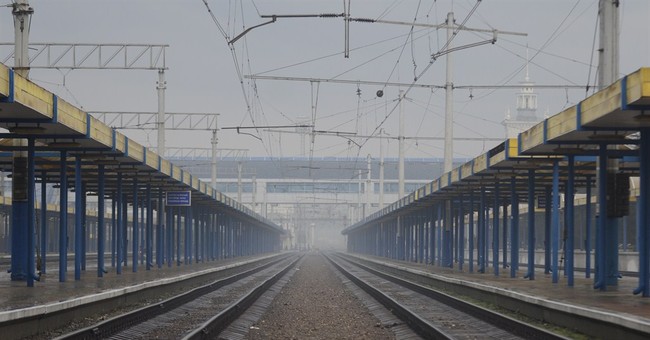 Minister Ryoo said, "I hope this meeting will help address the grievances of separated families before Seol (Lunar New Year's Day). I look forward to the North's proactive involvement in this opportunity."

Other items on the agenda were:

-projects for preservation of language, national culture, expansion of civilian exchanges, including the field of sports;

-Pyongyang cultural festival, and the World Peace Council, as well as signing an inter-Korean cultural agreement, and

-the proposal to begin work to create a peace park in the demilitarized zone (DMZ) and conduct joint research of the DMZ's ecology with the cooperation of an international organization;

-cooperate for the development of health, nutrition, and daily infrastructure;

-preserve forests, greenery, the ecology, and the environment while expanding joint projects such as sharing water resources;

-establish the foundation to create laws and overall institutions for the era of unification; and,

By far the most important, probably the only important, item is the resumption of actions related to separated families, specifically the resumption of family reunions in time to celebrate the lunar new year. All Koreans deeply feel the need to make progress on this issue, except possibly Kim Jong Un, who is too young to feel its visceral importance and lacks filial piety because of his western education. The Korean War generation is dying steadily before families have been reunited.

Ordinarily, such a proposal would stand little chance of acceptance. Since the start of winter training on 1 December, North Korean media coverage of Kim Jong Un's activities is dominated by imagery of his visits to military units. Nevertheless, last week a Chinese foreign ministry spokesman in his daily briefing criticized the US movie "The Interview" because it gratuitously and irresponsibly threatened the condition of reduced tension on the Korean peninsula.

Tension is down. The issue of reuniting separated families grows more urgent with time. The lunar New Year is a propitious occasion for a generous gesture between Koreans. Conditions are good for a favorable North Korean response.

Ukraine: Ukrainian President Poroshenko said on Monday he would meet the leaders of Russia, France and Germany on 15 January in Astana, Kazakhstan, in an attempt to restore peace with Kyiv's eastern regions in rebellion. He also admitted that there is no military solution to the secession because Ukraine lacks the resources to recover the regions by military means.

He said the government would not compromise on sovereignty and wanted east Ukraine, but admitted, "We haven't got the resources for an offensive today."

Russia. Russian Foreign Minister Sergei Lavrov told the media today he sees a real opportunity to solve the Ukraine crisis in 2015. "But it should be understood that the crisis will continue until the Ukrainians, without prompters from Brussels or Washington, agree about it among themselves," Lavrov said.

Meanwhile, President Poroshenko said Russia had agreed to supply Ukraine with power and coal, in another sign of an easing in tensions. He also said he had spoken with US President Obama about the possibility of him joining talks. "The most important thing is to turn a fragile ceasefire into a stable peace and return previously occupied territories under the control of Ukrainian authorities," said Poroshenko.

The map below is the latest situation summary posted by the Ukrainian government's National Security and Defense Council. It is significant because it is the first such posting to show only two areas of ceasefire violations or clashes. The situation has quieted significantly.

Comment: Cumulatively recent developments are steps towards at least a partial settlement, though the pace is glacial. The ceasefire appears to be holding in most areas.

The Russian attitude is noteworthy because it bespeaks no exaggerated negative reaction to Ukraine's open courtship of NATO.

Ukrainian President Poroshenko, however, is a loose cannon. Obviously his private negotiations with the Russians seem to be making progress on issues of energy. He is prospering from his Russian connections. Yet, his public statements about willingness to engage in peace talks almost always are punctuated with remarks about his determination to recover the two breakaway eastern regions. He leaves the implication that he would conquer the east by force, if he had the resources. That attitude is not conducive to the compromises necessary for a settlement..

According to army spokesman Lieutenant Colonel Didier Badjeck, about 1,000 Boko Haram fighters made coordinated attacks against five villages near Amchide and penetrated a nearby military base where they raised their black flag.

President Paul Biya personally ordered the air force attacks to force the terrorists out of the base. With air support the armed forces repelled the attackers and regained control of the base. One soldier died in the fighting, but 41 terrorists were killed in separate clashes. Badjeck said the area is now totally secured.

In a statement, Cameroon's Information Minister Issa Tchiroma Bakary said the multiple attacks showed that Boko Haram had adopted a new strategy aimed at "distracting Cameroonian troops on different fronts, making them more vulnerable in the face of the mobility and unpredictability of their attacks."

Last week, Cameroon said it had dismantled a Boko Haram training camp on its territory, and had recovered 84 children who were being trained there.

Finally, the Cameroonians did not run or abandon their base. President Biya responded swiftly enough so that forces on the ground retook the base when the air support arrived. Cameroonian forces don't have US ground support capabilities or doctrine, but evidently they do know how to coordinate operations adequately. They also seem willing to stand and fight.