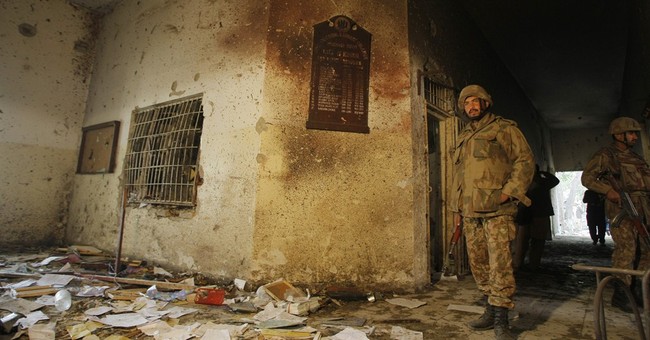 Pakistan: In response to the attack on the Army Public School in Peshawar, the government has lifted a six-year old moratorium on capital punishment for terrorism.

"It was decided that this moratorium should be lifted. The prime minister approved," said government spokesman Mohiuddin Wan, referring to Prime Minister Nawaz Sharif's approval of the decision by a ministerial committee.

"Black warrants will be issued within a day or two," he said, referring to execution orders.

According to Pakistan analysts, the moratorium on the death penalty was imposed in 2008. Only one execution has taken place since then. The Justice Project Pakistan, a legal aid group, said that there are believed to be more than 8,000 prisoners on death row in Pakistan, about 10 percent convicted of offenses labelled "terrorism".

Comment: Other Pakistan security scholars wrote that a major problem in Pakistan is that national security policy distinguishes between good and bad terrorists. For example, the Kashmiri militants are good terrorists because their operations tie down large numbers of Indian security forces in Kashmir and thus help equalize the conventional military imbalance that overwhelmingly favors India.

Another example of good terrorists, in Pakistan's policy, is the Haqqani syndicate. It is based in northwestern Pakistan, but focuses its energies and operations against the government in Kabul, Afghanistan. In some respects the Haqqanis are proxies of Pakistani intelligence because their operations ensure that Pakistan will retain influence in Afghanistan should the Afghan Taliban return to power.

US experience with Pakistan in the past 13 years shows that Pakistani intelligence is not capable of keeping track of or controlling the good and bad terrorists. As a result, Pakistan has no coherent counter-terrorism policy and no uniform legal definition of terrorism that is free of governmental manipulation. The 800 or so prisoners on death row for terrorism offenses presumably are all bad terrorists.

The Pakistani intelligence services will capture the culprits from the Peshawar attack and there will be executions. The terrorism problem, however, will continue as before. In extreme Islamist belief, capital punishment is no deterrent because death is a release, not a punishment.

A fatwa. Today the Pakistan Ulema Council (PUC) issued a fatwa - an authoritative religious opinion - that the killing of children is unIslamic. "Linking killing of innocent human beings with Islam and Jihad can only be termed as ignorance and it has no room in Islam," PUC Chairman Hafiz Muhammad Tahir Mahmood Ashrafi said.

In a fatwa issued by Darul Aftah of PUC on Wednesday, Ashrafi said all schools of thought and all religions and sects have agreed that the incident in Peshawar was "inhuman and ferocious". He said the Ulema has never endorsed killing of innocent people and added those who are linking the unfortunate Peshawar incident with Islam and Muslims are also not serving humanity.

The fatwa further stated that Islam considers the killing of a person as the killing of the entire humanity and Islam does not permit killing of children, senior citizens and women even during Jihad. He said that killing of teachers and students are against the teaching of Hazrat Muhammad (PBUH) who had preached respect of teachers.

Comment: In the past 13 years, this is one of the clearest and most succinct statements of moderate and orthodox Islamic practice that any group of religious scholars in Pakistan has ever issued. It took the mass murder of Muslim children to goad the mullahs into action.

The Peshmerga's Captain Sherwan Mohammad said, "We started a major assault on the ISIL militants, detaining many types of different military equipment." He said that warplanes were bombing ISIL strongholds in the city and that Kurdish forces were on the offensive against ISIL, whose fighters were fighting defensively and retreating.

Comment: Assuming the Kurdish claims are accurate, ISIL appears to have lost the battle for Kobani, for now.

Aleppo. News services report that Syrian government and allied forces nearly have Aleppo surrounded. They were in the process of closing off the last remaining line of communication to Turkey for the opposition fighters.

The UN wants a freeze in the situation to save lives and antiquities.According to one analysis, there are several difficult issues involved. The Damascus government wants to limit the freeze to Aleppo city, but the rebels want to extend it all the way up to the Turkish border.

A government source said the UN wants to open crossing points between the rebel and regime-held sides of Aleppo that would be guarded by UN peacekeepers. The government judges that such a force would be an infringement of Syria's sovereignty.

The government also insists that state-run public services, such as the police, be allowed to return to rebel-held areas, whereas the UN favors the idea of self-rule in the opposition areas.

Comment: A government assault on Aleppo is still weeks away, if it actually occurs. The government could decide that it would be more cost effective to besiege the town until it surrendered. One knowledgeable commentator wrote that a government victory in Aleppo would effectively break the back of the rebel opposition in northwestern Syria.

In effect, the UN and rebel positions would deny the government and its allied forces the goal of recapturing Aleppo, an objective for which they have fought for two years.

Ukraine-NATO: Ukrainian President Petro Poroshenko vowed to submit a bill repealing Ukraine's non-aligned status to the parliament upon returning to Ukraine from a visit to Warsaw.

"Immediately upon returning to Ukraine, I will submit a bill on repealing our non-aligned status to the parliament for consideration," Poroshenko said in a speech to the Polish Sejm and Senate on Wednesday.

Ukraine will intensify cooperation with NATO as much as possible and will seek compliance with the alliance's defense and security standards, he said.

"A huge amount of work has to be done to achieve membership criteria. I also have to work hard to hold a referendum so that only the Ukrainian people rather than our neighbors determine the direction of our further development," Poroshenko said.

Comment: Poroshenko's statements seem light-headed and in the moment of an upbeat visit to Warsaw. The hard and complex realities of Ukraine's strategic position between Russia and Europe might dampen the euphoria of his Warsaw trip.

In effect he stated that he will put Ukraine on a path that eventually leads to NATO membership. That almost certainly will lead to the final alienation of the separatist regimes in Donetsk and Luhansk. Russian support for their continued membership in Ukraine is likely to end.

Ukraine is in the catbird's seat between Europe and Russia. Russia wants it to remain there, but European states want it to decide in favor of NATO. The steady erosion of the Russian economy makes alignment with Europe look much more attractive at this time, but that window of opportunity will not last. NATO has no practical capability to defend Ukraine against potential Russian aggression in the future or to prevent secession by the self-declared people's republics of Donetsk and Luhansk.