Kyiv Seems Clueless About What to do With Eastern Ukraine 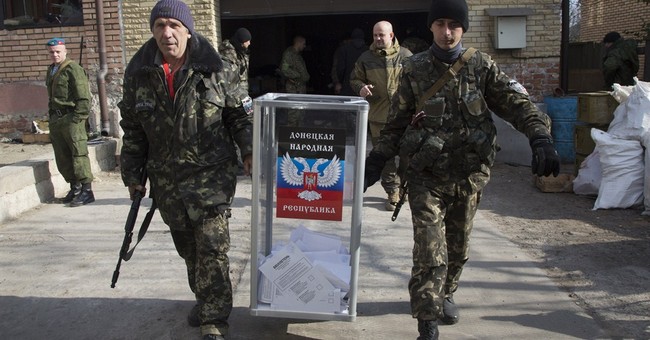 Ukraine: Today Ukrainian President Poroshenko said he asked the National Security and Defense Council to request parliament to rescind the law on special self-government in Donetsk and Luhansk. He said plans to hold new elections in the southeast in December.

Following the meeting with the Council, Poroshenko ordered army reinforcements to key southern and eastern cities in case of a new rebel offensive. He said the units were to protect Mariupol, Berdyansk, Kharkiv and the north of Luhansk region. Ukraine has created new military units to prevent further assaults on its eastern cities of Kharkiv, Mariupol and Dnipropetrovsk, Poroshenko said.

Comment: Poroshenko said he still was committed to the peace process, but his request to parliament to rescind the special autonomy law contradicts his assurances. He called the elected leaders in Donetsk and Luhansk bandits and terrorists.

The security measures he ordered today appear to be defensive. The cities he mentioned (identified by red dots on the map) essentially form a defensive arc around Luhansk and Donetsk. Increased vigilance in these cities implies that the Kyiv security officials expect the breakaway regions to try to expand their territory. The deployments show that the Kyiv authorities sense the need for defensive vigilance, but, beyond that, they have no idea what to do about the rebel regions. They will be looking to Western backers for guidance to avoid what could be a large, violent confrontation.

Libya: Fighting between Libyan army units and fighters belonging to jihadi groups in Benghazi killed at least 13 people. An attack on a boat prompted the government to close the port of Benghazi.

Today a Benghazi port official told the international press, "All ship movements and discharging of imports have been stopped." Analysts said that the Benghazi port is vital for eastern Libya for exporting oil and for importing food and manufactures.

Comment: During the past two weeks, army units and forces loyal to retired General Hifter have executed an offensive to force the withdrawal of jihadi fighting groups. Benghazi residents said that combat aircraft and tanks were being used in the fighting near the Benghazi port. .

Reuters reported smoke rising from the port which the aircraft attacked. An air attack was responsible for damage to a ship that led to the port closure.

The internationally-recognized government had to flee from Tripoli to Tobruk, close to the Egyptian border, after tribal militias took control of Tripoli in July. The deputy speaker of the parliament said that the government intends to relocate to Benghazi in the next one or two weeks, once army units restore security.

Libya is a failed state, fractured by tribal militias and Islamist militants of a variety of persuasions. Nevertheless, the oil industry is surviving if not thriving. Libya is pumping about 850,000 barrels per day which is normal, or slightly above normal. None of the warring parties wants to cut off the flow of revenue from oil exports. Apparently each faction expects to be the primary beneficiary of the oil industry, at some point.

Mali: On Sunday, Malian authorities reported that two soldiers were killed by an explosive device near the town of Bourem. Four others were injured. A French soldier was killed in the same area in late October.

Comment: A recent resurgence of violence has killed 21 U.N. peacekeepers since early September. It is unclear how much of the activity is the work of Touareg rebels or of al-Qaida terrorists. What is clear is that the terrorists and rebels remain a threat in the Gao region and require continual vigilance and securityoperations.