Islamic Extremists Declare War on Themselves 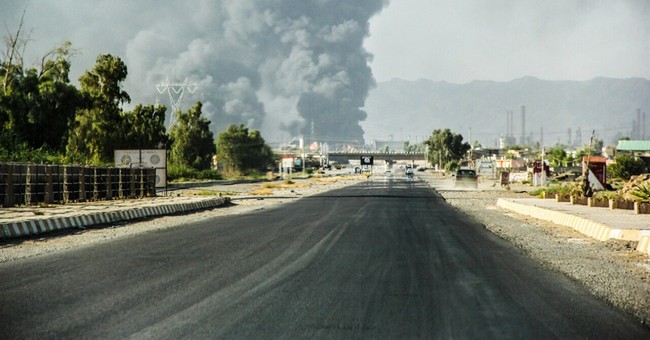 China: On 28 July, a large group of masked militants attacked civilians, police and officials in two towns in Shache County in Xinjiang region in western China. The militants attacked a police station and government offices in Elixku town, before moving on to the nearby town of Huangdi, targeting civilians and smashing vehicles. They also set up roadblocks on a main road and attacked passengers with knives and axes, according to police.

The Xinjiang regional government said 59 "terrorists" were killed by security forces in Shache County, while 37 civilians were killed in the attacks. The government delayed releasing news of the attack, but has not explained the delay.

Comment: These were the most deadly and largest scale attacks in years. Authorities attribute the attacks to Muslim Uighurs. Police suspected they planned them during Ramadan. They might have been a reaction to stern Chinese measures limiting Uighur observances during Ramadan.

These attacks embarrass the government which has implemented increasingly harsh security measures on the Uighurs in response to less serious militant attacks this year. Loss of face might have contributed to the decision to delay releasing the details. The Chinese prefer to announce a problem when the solution has begun to be applied. Officials announced the crackdown will continue.

Iraq: Fighters from the Islamic State of Iraq and the Levant (ISIL) inflicted a significant defeat on Kurdish militia forces on Saturday. They killed 27 Kurds and routed them from three towns and claim to have taken control of the Mosul Dam, which supplies water and hydro-electric power to the north.

A Kurdish spokesman said the Kurds still control the dam, but not the towns. He said they withdrew their forces from the towns to limit casualties, but plan to mount an offensive to take them back.

Comment: The news media have described this as the first major defeat for the Kurdish militia. Perhaps more importantly, it is the first major test of strength. It also took place in an area northwest of Mosul that has long been considered Kurdish and should have been better defended.

The larger significance of the attacks is that they prove that ISIL intends to take all of Iraq, not just the Sunni and Shiite Arab regions. The Kurds need to improve their intelligence and their militia. They may expect no help from Baghdad. If the Kurdish militias cannot defend against ISIL, Kurdistan will be destroyed.

Special comment: NightWatch commented previously on the proliferation of insurgencies around the world, many of them in Muslim countries. Only a very small number of analysts and commentators have written that the Islamic world is in civil war. Muslims are killing other Muslims at an astonishing rate. This overarching crisis is camouflaged by the daily news coverage of individual national crises.

Muslim leaders seem to have no solutions to stop this blood-letting and no arguments to counter the appeal of religiously-motivated violence among Muslim youths. The Islamic world is losing its best and brightest children to its own jihadists.

Lebanon: On 2 August, Syrian rebels killed at least 11 Lebanese Army soldiers and took 13, mainly Internal Security Force soldiers, as hostages in the border town of Arsal in northeastern Lebanon. The militants took control of an Army barracks in Arsal.

The Army said it killed 30 militants, who are believed to be from the al-Nusra Front, which is affiliated with al-Qaida. The government sent reinforcements to Arsal try to take oust the Syrians.

Lebanese and international media speculated the attack was in retaliation for the recent arrest of a senior militant. Lebanese Army chief General Jean Kahwagi denied that the attacks were retaliatory. He said they were "planned a long time ago. The militants were waiting for an appropriate time, which came during the last 48 hours." He also said that the attackers were all foreigners and included fighters from the Islamic State of Iraq and the Levant (ISIL).

During this Watch, the al-Nusra Front circulated a video of the captive soldiers who said they defected from the Lebanese Army and in Hizballah. As noted, most of the captives were not members of the Army, but of the Internal Security Force.

Comment: Media reports indicate that Arsal is a Sunni town in between the Syrian border and Shiite enclaves west of Arsal. It hosts between 5,000 and 10,000 Syrian refugees, according to UN information, in camps that the Syrian militants use as safe havens. One analysis indicated at least 3,000 rebels are in the mountainous border region east of Arsal, having been driven into Lebanon by Hizballah and the Syrian armed forces.

A quick map study shows that at least seven other towns near Arsal are vulnerable to this kind of attack. Nevertheless, the Arsal attack does not appear to be the leading edge of a militant offensive to incorporate Lebanon into ISIL. But it could have been because of the large Syrian refugee population that Lebanon hosts.

Lebanon has more than 1.1 million registered Syrian refugees, according to the UN Refugee Agency. They now constitute about 20% of Lebanon's total population.

Israel: Friday night the security cabinet approved a unilateral withdrawal of ground forces committed to Operation Protective Edge. Most Israeli ground forces withdrew from Gaza on Saturday and Sunday. The air force, however, continued attacks against targets in Gaza.

Israel announced a seven-hour humanitarian ceasefire for Monday, except for the Rafah area in the south which borders Egypt. Israel said its forces are authorized to retaliate, if fired on during the ceasefire.

Israeli authorities reported that Palestinians fired 108 rockets and mortars on Sunday and 84 on Saturday. The Palestinians have sustained more than 1,800 killed and 9,320 injured. Israel has lost 64 soldiers killed.

A senior IDF officer said that "Operation Protective Edge, contrary to previous operations, may bring about a basic change in the situation." According to him, the IDF will complete its mission in the coming hours. "The security situation in the Gaza vicinity will be much better in following days," he said, adding the severe blow dealt to Hamas has the potential for a significant change.

However, the IDF estimates that more tunnels will be dug reaching into Israel. According to an Intelligence officer, Hamas suffered significant damage, and "the Gaza Strip starts its reconstruction at a much lower point than Lebanon in 2006."

Comment: Some members of parliament have criticized the government for frequently shifting the stated aims of the Operation and for quitting without having reached a ceasefire or any other agreement with the Palestinians.

A Palestinian delegation is in Cairo to resume ceasefire talks. The Israelis have not yet sent a delegation.

Tunisia-Libya: Tunisia closed its border crossing point with Libya on Friday, after clashes broke out between Libyan border guards and Egyptians seeking refuge in Tunisia. Press reported 6,000 Egyptians were at the border on Saturday.

The Egyptian civil aviation ministry announced that it was arranging an airlift to Cairo of Egyptians who reached the airport at Jerba, Libya. The ministry planned to lift about 3,200 people

News reporters said the Tunisian border was operating normally on Sunday, 3 August, but still was only allowing entry by holders of valid visas or other travel documents.

Comment: The border crush is a ripple effect of the recent surge in fighting in Tripoli. Most countries are trying to evacuate their nationals, including the Chinese and the UK this weekend.

Media reports indicate Tunisia is accommodating 2 million refugees who have arrived from Libya since 2011. They are placing an extra burden on Tunisia's subsidy system, causing increased demand for fuel and threatening a run on basic commodities.