Rebels in Iraq and Syria are Turning on Fellow Jihadists 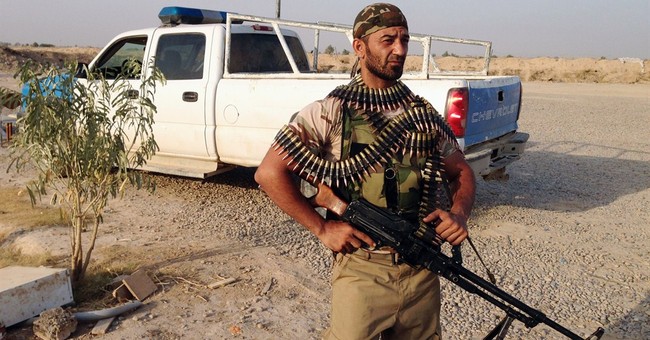 North Korea: North Korea fired two short-range ballistic missiles toward the Sea of Japan early on Wednesday, 9 July. Both appeared to be variants of the Scud missile and flew over 300 miles, according to South Korean and Japanese press.

A South Korean military source told the press that one or both of the missiles were launched from the southwest of North Korea and flew northeast across North Korea before impacting the Sea of Japan.

Comment: Launches from the southwest towards the northeast are infrequent and potentially dangerous in the event of a technical problem because a missile would fall on North Korea. The azimuth, however, permits a full range test of air frames that have a range of 500 kms without hitting a neighboring state -- South Korea, China, Japan or Russia - or falling into the Pacific Ocean.

China: For the record. On 2 July, Al Arabiya reported that Muslims in the Xinjiang autonomous region in western China who are civil servants, students and teachers have been banned from fasting during Ramadan.

The state-run Bozhou Radio and TV University said on its website that it would "enforce the ban on party members, teachers, and young people from taking part in Ramadan activities. …We remind everyone that they are not permitted to observe a Ramadan fast."

The commercial affairs bureau of Turfan city, in Xinjiang, said on its website that "civil servants and students cannot take part in fasting and other religious activities."

Comment: China officially allows freedom of religion, but personal freedoms always are subordinate to the interests of the state and Party. Several news items reported that official teams are checking Muslim homes to ensure the residents are not observing Ramadan.

Afghanistan: Supporters of Dr. Abdullah Abdullah rallied in Kabul today. Abdullah rejected the results that the election commission announced and declared himself the winner. He threatened to create a parallel government, but backed down under intense international, primarily US, pressure.

Comment: In his speech, Abdullah said he needed a few days to consider his options. He asked his supporters to give him some time. Meanwhile, Ghani is acting as if he is the president-elect. He said he is confident that the preliminary results will be validated. Expect violence by Friday after prayers.

Iraq: The Islamic State of Iraq and the Levant's (ISIL) acolytes have begun arresting former Iraqi army senior officers and Ba'athists in the Mosul area. The so-called Caliph sees his former allies as threats. Up to 60 prominent men have disappeared.

Comment: ISIL's record of savagery against fellow jihadists in Syria apparently failed to impress the Iraqi Ba'athist and Sunni tribal leaders about ISIL's propensity to kill its allies while it is killing its foes. Their conviction that they can control ISIL appears based on hubris.

It is an important point because the Sunni Vice President of Iraq, Tareq al-Hashimi, who is in exile, recently told a reporter that ISIL is part of the larger Sunni Arab tribal uprising against al-Maliki. He said that struggle would go on without ISIL.

In the NightWatch view, al-Hashimi has it precisely backwards. ISIL is exploiting discontented Sunni Arab tribes and Ba'athists to advance the dominion of the Islamic State. The Sunni Arabs of Iraq are proving to be easy marks. If ISIL succeeds, there will be no struggle against al-Maliki's government and no Sunni tribal uprising.

ISIL is acting quickly to eliminate rivals and malcontents, especially their leaders. The so-called Caliph is reported to have had 13 imams executed over the weekend in Mosul, where he preached.

The Sunni tribes stand a better chance of changing al-Maliki's government than in resisting the onslaught of ISIL, once it turns on them. They have the manpower, but lack ISIL's will, speed and ruthlessness.

Comment: Ramadi has been in jihadist control for months. This is the first attempt to try to recover parts of it since ISIL's invasion.

Syria. In the past two days, Syrian fighter jets bombed border sites controlled by ISIL in Qaim and at al-Walid border crossing points.

Comment: About half of the recent daily fighting reports mention air attacks by Iraqi, Syrian and occasionally Iranian aircraft. Air attack results might just be good for public morale, but the security situation appears slightly more stable since the air forces joined the fight. It is still not clear who is flying what aircraft, from open sources.

Politics. Under international pressure, the parliament leaders have decided to convene next Sunday to try again to elect the speaker of parliament, the prime minister and the president of Iraq.

Israel: The Israeli Cabinet on 8 July authorized the defense forces to call up 40,000 reservists. Air strikes hit 260 targets on Tuesday and 160 on Wednesday morning. Arab press said they killed 27 and injured 100 civilians.

Israeli Defense Minister Moshe Yaalon said that Israel will continue its military operations against Hamas until there are no more rocket attacks from the Gaza Strip.

Comment: The armed wing of Hamas threatened to fire rockets farther north into Israel and has done so. They still do almost no damage. Almost all the casualties are Palestinians.

One open source reported today that Hamas leaders are looking for an exit from further escalation because the Gaza Strip administration is broke; Hamas fighters are not prepared for the Israeli offensive and the air attacks are causing damage that Hamas cannot repair. Hamas leaders blame Islamic Jihad and other groups for the rocket firings.

Israel is holding the Palestinian population hostage so as to pressure the leaders to stop the attacks. Hamas might be getting close to agreeing to a ceasefire, but Israel does not appear to be ready.

North African Regional Security: Tunisian authorities said on Monday that Tunisia will host a meeting of foreign ministers from the six countries neighboring Libya to discuss ways of helping it deal with political turmoil and rising lawlessness.

The meeting will take place in Hammamet, south of Tunis, on 13 and 14 July. Egypt, Algeria, Sudan, Chad and Niger all plan to send their foreign ministers, the Tunisian foreign ministry said. Representatives from the Arab League and the African Union also are expected to attend.

The public announcement said that the leaders will "exchange points of view on the forms of support that the neighboring states can offer Libya to help it launch a national dialogue and to strengthen state institutions and the democratic transition process.

Comment: The meeting is about ISIL and Libya. Egyptian and Algerian leaders reportedly fear that Libyan members of ISIL have returned to Libya to extend ISIL's dominion to the Maghreb. They also fear that groups such as al-Qaida in the Islamic Maghreb and jihadists in Benghazi will switch allegiance or splinter to join ISIL. The Egyptian Muslim Brotherhood has sent its congratulations to the so-called Islamic State.

Egyptian President al-Sisi is said to be worried that Libya and Tunisia are the most vulnerable to ultra-extreme jihadist subversion because internal security is weak in both states. Egyptian, Tunisian and Algerian security and intelligence services have been holding meetings and exchanges since mid-June.

Once established, an ISIL presence in Cyrenaica, eastern Libya, may be expected to expandrapidly to pose a serious threat to the stability of northern and Sahelian Africa.

Uganda: An estimated 300 tribal fighters carried out 13 coordinated attacks against security forces near Uganda's border with Congo on Saturday and Sunday near Mount Stanley. They were repulsed before they could overrun a military barracks. President Yoweri Museveni said the attackers used guerrilla tactics and looted weapons from soldiers and police in two western districts.

In four days of fighting, the death toll has reached 96. A police spokesman said that, but for the intervention of the army, an entire small tribe was targeted for extermination by a larger, dominant tribe. Some fighting reportedly continues, but the army said it has the situation under control.

Comment: The government has assured the public that the attacks are not the work of rebels or insurgents.

Comment: Last week seven French soldiers at Bambari were injured by a grenade attack. Both Christians and Muslims have committed atrocities at Bambari in the past month. Christian militias will avenge this attack. Bangui is quiet, but outside the capital the sectarian violence shows little change.

Nigeria: A spokesman for the Defense Ministry said the army completed a successful operation in a forest in north central Nigeria to capture a Boko Haram base. He also said it had killed 44 Boko Haram fighters in other recent operations.

Comment: The lack of casualty information and other details suggest the army is trying to redeem its image through press claims. The location of the operation is outside the three states that Boko Haram has ravaged with impunity. Nevertheless, something has happened because no Boko Haram attacks have been reported for several days. The periodicity of attacks in the past few weeks was almost daily.