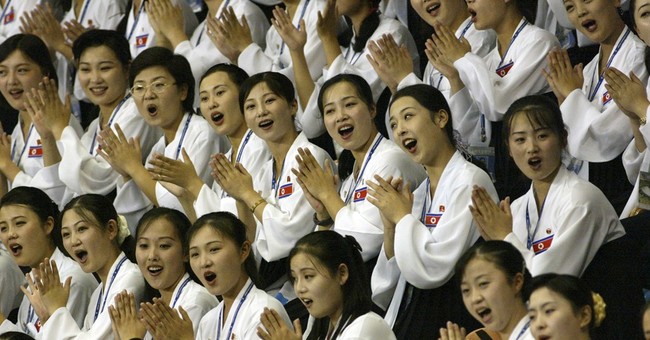 "The government of the DPRK released the following statement on 7 July, 20 years since President Kim Il Sung left his last signature on a historic document related to Korea's reunification."

"The Korean nation's cause for national reunification is undergoing big difficulties and trials due to the vicious challenges and obstructive moves of the anti-reunification forces at home and abroad."

"The Democratic People's Republic of Korea (DPRK) government clarifies as follows out of its patriotic desire to tide over the difficulties lying before the nation, to improve the north-south relations and to open up a fresh turning phase for independent reunification at present:

1.The north and the south should end reckless hostility and confrontation and open up the road for reconciliation and unity…. (Note: this means stop all military exercises aimed at North Korea, especially with the US.)

2.The north and the south should reject dependence on outsiders and settle all issues by the efforts of Koreans…. (Note: this means stop consulting with the US.)

4.The north and the south should create the atmosphere favorable for the improvement of the north-south relations…. (Note: this means relax restrictions on South Koreans going to North Korea.)"

Comment: This statement is aimed at the South Korean people, especially those born after the Korean War. The North Korean leaders want the South Korean younger people to act as their agents of change. South Koreans strongly favor some of the terms, such as more frequent people-to-people exchanges. These could include more trips to the Mount Kumgang resort and more frequent visits with separated families.

The North is trying to build back pressure on the South Korean government for changes that will provide hard currency for North Korea and undermine South Korea's profitable relationship with China as well as the US and Japan. The burden of making changes, however, is one-sided: entirely on the government in Seoul.

The biggest obstacle to all four North Korean proposals is North Korea. It has not shown it can maintain a steady policy course, except confrontation and provocation. Pyongyang has blocked progress on North-South reconciliation whenever any programs begin to make progress, even those proposed by North Korean leaders.

Reconciliation with South Korea, as in a federation or confederation, would undermine the justification for North Korea's police state and with it the Kim family dynastic rule. This statement is an act of grandstanding because the North's propagandists deliberately crafted the proposal to be unacceptable in order to embarrass the South Korean government when it rejected it.

Rejection of a rare government overture of this kind might be followed by another show of North Korean pique.

Afghanistan: The election commission has decided to announce preliminary election results on 7 July.

Comment: The election commission apparently has decided against European Union assistance in an investigation. On Sunday, Dr. Abdullah warned that he would reject the results unless there were no signs of fraud. Expect violent street disorders.

Iraq: An Iraqi security source said that the crisis is nearing an end. He cited three signs of progress: Syrian help; the army's recapture of Tikrit and the brutality of the Islamic State of Iraq and the Levant (ISIL) against the Iraqi people.

The self-styled Caliph of the Islamic State supposedly made an appearance in a mosque in Mosul on Friday. He told everyone to obey him.

Comment: The Iraqi government is studying the video of Caliph Ibrahim to determine whether the person in it is Abu Bakr al-Baghdadi, the chief of ISIL. The video means ISIL still needs people. Situation reports indicate ISIL continues to take heavy losses as government soldiers fight back.

Politics. Al-Maliki insists on a third term as prime minister.

Iraq-Iran: The official IRNA news agency reported on Saturday than an Iranian pilot was killed while fighting Sunni jihadists in Iraq.

Colonel Shoja'at Alamdari Mourjani was killed "defending" Shiite Muslim holy sites in the city of Samarra, north of Baghdad, the report said. It did not state whether he died fighting on the ground or while piloting or flying in an aircraft.

Comment: This is the first confirmation by an official Iranian press outlet that an active duty Iranian airman was in Iraq. Heretofore, Iranian spokesmen have said Iran is willing to provide whatever support Iraq needs, but Iraq has not asked. Iran's official news agency has now disproven that statement.

Israel: Palestinians have rioted in East Jerusalem and other towns for five days running because of the revenge murder of a Palestinian teenager on 2 July. In addition, Hamas has continued rocket firings. At least 30 rockets were fired over the weekend. Israel has retaliated with air strikes in the Gaza Strip, hitting at least 30 targets.

Comment: The Palestinians have clarified their intentions, which are to escalate the crisis. On Saturday, Prime Minister Netanyahu said, if they escalate, Israel will do so as well. Expect the violence to continue.

Hamas, Islamic Jihad and other militant Palestinian groups seem to have been deliberately moving towards a crisis, possibly because of strong policy differences among factions in the Palestinian unity government. Whatever the reason, the rocket firings and some of the street violence are not spontaneous outpourings of grief.

If Hamas and the other groups are not fighting Israel, they have little purpose. Hamas' governance in the Gaza Strip has been inept. A new fight with Israel unites all factions for a while and postpones political problem solving.

Kenya: Nine people were murdered at the Hindi trading center in Lamu County, near the scene of attacks in which 65 people were killed last month, Kenyan officials said. Another 20 people were killed in another attack in the Gamba area of neighboring Tana River County. Both counties are located north of Mombasa.

Comment: Limited information suggests the group that attacked in Lamu County last month also is responsible for the latest murders.

Ukraine: The Ukrainian offensive is making progress against the separatists. On 5 July, separatists said the "overwhelming numerical superiority" of the Ukrainian army forced them to leave Slavyansk and to relocate south.

A senior security official said that the strategy calls for Ukrainian forces to blockade Luhansk and Donetsk, which are the main cities held by the separatists.

Comment: Obviously, there will be no ceasefire or peace negotiations with the separatists. Ukrainian President Poroshenko and his aides never intended to talk with the people who administered the attempted secession of the Luhansk and Donetsk regions. They never stopped calling the separatists bandits.

The window for effective Russian assistance appears to be closing. If Ukrainian forces besiege Luhansk and Donetsk, the opportunity for assistance will have passed.