ISIL Closes in on Baghdad 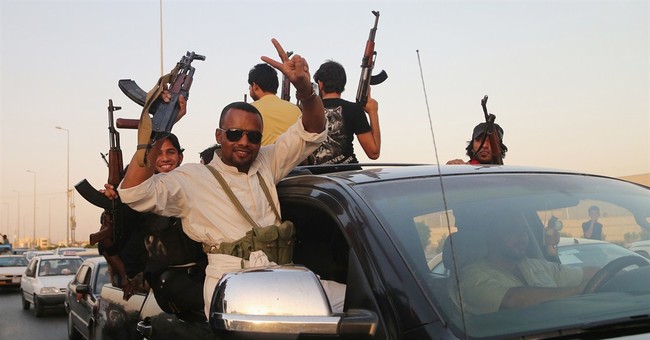 "The fuss made by the U.S. and its followers in the international stage as if they are interested in denuclearizing the Korean Peninsula is a ridiculous trick in expectations of concession or compromise from us who will further strengthen our war deterrence....now for us, it is unthinkable to build economic might and a strong socialist country without strengthening nuclear capacities."

North Korea will not respond to US calls to give up nuclear arms in exchange for development assistance. The newspaper said, "Our nuclear deterrence is not an object of political negotiations or economic trading."

Comment: The timing of the article indicates its purpose is to counter a recent increase in diplomatic meetings among other members of the Six Party Talks forum to explore a resumption of the talks. The South Korean Foreign Minister Yun Byong-se recently completed a series of exploratory talks, including with Chinese Foreign Minister Wang Yi. The North is not disposed to talk.

The most significant language is the assertion without any conditions that North Korea will further strengthen its war deterrence. That means it will continue to build and test its military weapons.

Pakistan: New counter-insurgency operation. A military statement said, "On the directions of the government, the armed forces of Pakistan have launched a comprehensive operation against foreign and local terrorists who are hiding in sanctuaries in North Waziristan."

The army said eight militant hideouts were destroyed and 105 "terrorists" were killed, most of them Uzbeks. The statement said among the dead was Abu Abdul Rehman al-Maani, an Uzbek believed to have helped organize the attack last week on Karachi international airport.

According to the Inter Services Public Relations (ISPR) office, the military operation "Zarb-e-Azb" was launched against local and foreign terrorists. The operation is named after the sword Muhammad used in two wars against the enemies of Islam. "It would be a comprehensive operation against the terrorists who had established sanctuaries in North Waziristan," a military official said.

According to ISPR, the army has been given the task of eliminating the terrorists. It said the process of identifying terrorists' sanctuaries has been completed.

The government and military authorities formally announced the operation on Sunday evening, but the Pakistan Air Force attacks that preceded the ground phase began before dawn on Sunday.

Comment: Pakistan's description of the operation suggests it is limited, with the terrorists from the Islamic Movement of Uzbekistan being the primary targets. Uzbeks terrorists from Afghanistan escaped to North Waziristan with the Afghan Taliban. They have since cooperated with the Pakistani Taliban. Two days ago actually claimed responsibility for the Karachi airport attack. That claim made them a primary target.

The Uzbek claim of responsibility makes it easier for Pakistani leaders to use military force in internal operations. The Pakistan Army is reluctant to attack Pakistani citizens, but the Uzbeks are not citizens and the targets are "terrorists." Thus, the Army probably expects no bad press from these operations.

Iraq: Near Baghdad. On Saturday, Iraqi security forces claim to have stopped the ultra-extreme Islamists and to have retaken the towns of Ishaqi, al-Mutasim and Duluiyah, all three in Salah ad Din Governate, from Islamic State in Iraq and the Levant (ISIL) militants. This is the governate directly north of Baghdad.

Comment: The actual security situation is complicated by the need for the government and for ISIL to boast of their military successes. Our comparison of the claims indicates ISIL has stopped about 50 or 60 miles from Baghdad on its two southern axes of advance towards Baghdad. No attacks have been reported directly from the west.

On Saturday, an ISIL spokesman reinforced the message that Baghdad remains a target. ISIL also posted to the Web photos of its fighters engaging in mass murders of Iraqi soldiers in Mosul.

Comment: No group has claimed responsibility for the car bombs. They probably are the work of bomb cells already in or around Baghdad before the ISIL mobile forces began their attack. The Web photos are intended to terrorize; they will certainly discourage any soldiers from surrendering.

Support for the government from the Anbar tribes. In Anbar Governate, west of Baghdad, Sheikh Ahmed Abu Risha, head of the Awakening Council, said his forces -- who are Sunni Arabs -- are helping Iraq's Shiite-led central government fight the Islamist militants. He called on the United States for help on 14 June.

The Anbar Awakening destroyed the predecessor of ISIL in 2006. These tribes have the manpower, experience and skill to protect Baghdad in the west. Abu Risha has already taken action, but almost certainly has been in negotiations for a better deal from al Maliki.

Iran promises aid. The Iranian leaders have maintained tight security about any assistance decisions they have implemented. They have made no secret, however, of their willingness to respond favorably to any requests al Maliki makes. Today's statement by President Rouhani suggests al Maliki has not made any requests, which is not credible.

Iran has an interest in portraying Iraqi counter-attacks as Iraqi accomplishments, without overt Iranian help. Otherwise, some Sunni Arab states might judge themselves justified in intervening to help ISI, thereby widening the struggle even more.

Turkey: Concerned about the Turkmens. The ISIL leaders moved quickly to take Mosul. In trying to catch the Iraqi defenders by surprise, they bypassed some important towns still held by forces loyal to Baghdad. One of these is the northwestern town of Tal Afar.

Over the weekend, fighting occurred in Tal Afar, as ISIL tried to consolidate its rear area. The fighting sparked a statement by Turkish Prime Minister Erdogan because many Turkmens reside in Tal Afar.

Erdogan said, "Developments in Tal Afar cannot be underestimated. It is apparent that Turkmens are the majority in the structure of Tal Afar. You know that almost half of our Turkmen brothers are Sunni and almost half are Shiite. This is the situation. We are closely following the events there and we will decide what kind of steps can be taken in a meeting we will have with our friends this evening, as soon as we return to Ankara."

As for Turkey, he said, "We are definitely determined to establish an armed force. People are obliged to defend themselves…Turkey should have been closer to the Turkmens. Turkey stood at an equal distance from everyone, but we should have been supported more. Turkmens cannot live here for one minute without Turkey's moral force," he said.

Comment: The Turkmens want arms to defend against the ultra-extreme Islamic militants as well as the Kurds. Many Turkmens live in Kirkuk which is now under the protection of the Kurdish peshmerga. The Kurds are using the crisis to encroach on other tribes' rights and land, according to the Turkmens.

Jordan: Increased precautions. Information Minister Mohammad Al-Momani said on Sunday that Amman was putting measures in place in response to the terrorists' takeover of Mosul and other towns in Iraq.

"All civil and military state institutions are taking the necessary and precautionary measures to avoid crises like the one Iraq is going through now," he said.

Press outlets reported Jordanian authorities have tightened control along the borders with Iraq, especially at border crossings. An official indicates that Jordan does not expect a refugee influx. "The assessments and indications the Kingdom has received do not suggest potential waves of Iraqi refugees."

Comment: A concern for Jordan is that extreme Islamists in Jordan will be encouraged by ISIL's success, as a ripple effect.

Syria: On Sunday, Syrian army forces and Hizballah fighters recovered the village of Kassab, in northwestern Syria near the Turkish border, from the al-Nusrah Front, which is the al-Qaida-approved extreme militant group in Syria.

Comment: Al-Nusrah Front fighters seized the Armenian town of Kassab in the Alawite homeland region of Latakia Province on 21 March and have held it since then. Al-Nusrah Front fighters were brutal towards the Christians, engaging in public crucifixions and exacting Islamic submission taxes and protection payments. Kassab is the only border crossing point from Latakia Province to Turkey.

Syria charged that Turkey assisted the al-Qaida-backed al-Nusrah Front in reaching Kassab last March. Turkey charged that regular Iranian soldiers were fighting on the government's side, in addition to Hezbollah.

This is tonight's good news. Syrian government successes take pressure off Iraqi forces and make ISIL look to the security of its rear area in Syria. For now, the Syrians are making sure that ISIL's so-called Caliphate will not reach the Mediterranean Sea.

Ukraine: On 14 June, pro-Russian separatists in Luhansk shot down a Ukrainian army transport aircraft as it came in to land, killing all 49 people on board.

Comment: This is the most sensational security development of the weekend. It has infuriated the Kyiv authorities, who have vowed to block the entire Russian border by the end of this week.

On Saturday a group of Ukrainians protested outside the Russian Embassy in Kyiv and attempted to sack the building. Russian diplomats said the Ukrainian thugs wanted to spill blood.

Russia: Russian Foreign Minister Lavrov said he was disappointed that at the UN the Western backers of the Kyiv regime - US, France, Germany -- declined to denounce the attack on the Russian embassy.

Comment: Russia has concluded that the Western states are protecting the Kyiv regime and thwarting a settlement of the crisis. This episode reinforces that judgment.

Libya: Multiple news sources reported that forces loyal to retired Major General Hifter launched another offensive surge in Benghazi. They attacked militants at Sidi Faraj, a shrine site, south of Benghazi and in the area of the al-Hawari Hospital, east of the center of town. They reportedly killed 4 militants and wounded 14.

As a result of the fighting, Turkey evacuated its diplomats from its consulate in Benghazi.

Comment: The Turkish evacuation is less a reflection of the security situation in Libya and more an over-reaction to the capture by ISIL of 49 Turkish consulate staff members in Mosul. The Turkish parliamentary opposition's criticism of the Erdogan government's failure to protect the consulate has been shrill.