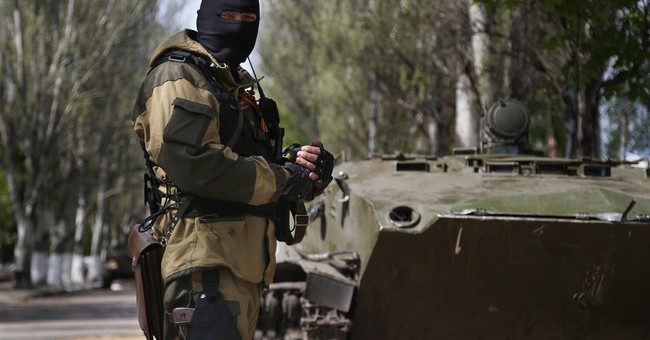 China-US: At the Foreign Ministry press briefing in Beijing today, the spokesman responded to a question about statements made by the US President in an interview with a Japanese newspaper.

"Q: According to reporting, Japan's Yomiuri Shimbun on the 23rd published the content of its interview with US President Barack Obama. Obama says that the Diaoyu Islands (Senkaku Islands) are administered by Japan and therefore fall within the scope of the Japan-US security treaty. At the same time, he says that the United States supports a greater role for Japan in the security arena in the Asia-Pacific region. Does the Chinese side have any comment?"

"What needs to be pointed out is that the Japan-US alliance is a bilateral arrangement forged during the Cold War era and should not undermine China's territorial sovereignty and legitimate rights and interests. China resolutely opposes putting the Diaoyu Islands under the Japan-US security treaty. The American side should respect the facts, strictly honor its commitment to taking no sides on issues concerning territorial sovereignty in a responsible manner, exercise caution in its words and deeds, and earnestly play a constructive role in regional peace and stability."

Comment: This is a re-statement of the standard Chinese position. China cannot and will not back down on issues of territorial sovereignty.

Concerning North Korean developments, the spokesman confirmed that South Korean President Park spoke with Chinese President Xi Jinping about recent activity in North Korea. The spokesman said China "is paying close attention to the current tense situation." Xi restated the Chinese commitment to the denuclearization of the Korean Peninsula and to peace and stability through dialogue.

The spokesman said, "The two heads of state agreed to continue to maintain communication, coordination, and cooperation on the Korean Peninsula issue."

Russia-Ukraine: Russian Foreign Minister Lavrov gave an interview to Russian state TV channel RT. He accused the US of reneging on the 17 April Geneva document which calls for reciprocal actions to stabilize the situation in Ukraine. In every case the US has dictated what Russia must do and what eastern Ukrainians must do without taking reciprocal action in Kiev.

Lavrov noted that illegal armed bands are to be disarmed by both sides, but no group is attempting to disarm Right Sector, the Ukrainian ultra-nationalists. He said that groups are to vacate buildings but apparently not in Kiev and other cities. Lavrov opined that the US is "running the show" in Kiev, citing reports of CIA agents at national security headquarters in Kiev.

Lavrov noted the first operation by the Kiev regime against the eastern Ukrainians began the afternoon of 17 April. As for the operation ordered yesterday, Lavrov said it was "quite telling" that Kiev had re-launched its "anti-terrorist" operation in the east on Tuesday during a visit by "Joe Biden." He referred to the US Vice President repeatedly, but only as "Joe Biden."

Lavrov's most important statements came in response to a question about Russian troops. The question posed by interviewer Shevardnadze and Lavrov's reply are reproduced below.

"Sophie Shevardnadze: You've also said many times that Russia has no intention of moving its troops inside Ukraine, and just recently, Dmitry Peskov, the Russian president's press-secretary confirmed that there is a military contingent that is reinforced on the Russian-Ukrainian border; There must be a worst-case scenario in which this contingent will be used?"

"Sergey Lavrov: If we are attacked, we would certainly respond. If our interests, our legitimate interests, the interests of Russians have been attacked directly, like they were in South Ossetia for example, I do not see any other way but to respond in full accordance with international law. Russian citizens being attacked is an attack against the Russian Federation."

"The only thing I would like to highlight at this stage is that the Russian troops are on the Russian territory. The request for inspections under the so called Vienna Document of 2011 and under the treaty of the Open Sky, they have all been granted. The inspectors visited the areas of deployment of the troops who are participating in training exercises. Planes flew over the areas where the exercises and no one who participated in the inspections, including the Americans, Ukrainians and Europeans ever brought up any fact that would indicate that Russia was engaged in some dangerous military activity. So we are on our territory and we are doing nothing which is prohibited by any obligation of us. The Ukrainian troops are also on their territory, but the difference is the fact that they have the order from Turchynov to use weapons against civilians and this is a criminal order."

In most of the remainder of the interview, Lavrov discussed the intransigence and lack of statemanship of "the Americans" in considerable detail.

Comment: Lavrov stated the conditions for Russian military intervention. The interview was a recitation of Russia's complaints and an explanation of the justification for military intervention in Ukraine, should it be ordered. The intended audience is the Russian populace. That is suggested by Lavrov's reference to the acting president of the Kiev regime in the same casual fashion as he referred to the US Vice President, by name without titles. He insulted both.

In terms of propaganda analysis (see Alexander George, Propaganda Analysis), Lavrov's mention of South Ossetia signifies that the Russian leadership are interpreting events in Ukraine as parallel to those in Georgia in 2008. That is an incongruity because Ukraine is not Georgia; eastern Ukraine is not South Ossetia; and 2014 is not 2008, among many other differences. Nevertheless, that reference discloses the framework in which Russian leaders are interpreting developments in eastern Ukraine.

It means they have made the decision to intervene if the conditions for intervention are met, i.e., Russian interests are attacked. The leadership's sense of the situation is that those conditions will be met, just as they were in South Ossetia. They base that on the behavior of Turchynov, who has issued attack orders as did Saakashvili six years ago.

The situation is heading towards Russian intervention, probably soon.

"Moscow is extremely surprised at the distorted interpretation by the Kyiv authorities, as well as by our American partners, of the content of the statement adopted in Geneva on 17 April at the end of the four-way meeting between representatives of Russia, the US, the EU and Ukraine."

"This document contains a clause that says that all illegal armed groups must be disarmed. However, instead of taking effective measures to implement this accord, Kyiv and Washington, as well as a number of European capitals, are continuing to insist on the need "for arms to be laid down" only by Ukrainian citizens defending their rights in South-East Ukraine. At the same time, they are turning a blind eye to the ongoing provocative actions of militants from radical right-wing forces, including the so-called "Right Sector", both in Kyiv and in various cities in the South and East of the country, which have already led to loss of life on the night of 19-20 April."

"The Russian side continues to believe that our Western partners are serious when they speak of their desire to facilitate the peaceful resolution of the political crisis in Ukraine. However, the facts, alas, show the reverse. We are still waiting for Kyiv, which is responsible for arranging a dialogue with Ukraine's regions, including the South-East, to honor its promises."…

"We were hoping that US Vice-President Joseph Biden, who visited Kyiv on 21 and 22 April, would exert an influence on the "strong-arm" aspirations of the current Kyiv authorities. However, as soon he left Ukraine's capital, they announced the resumption of the "antiterrorist operation" in Ukraine's eastern regions."

"Statements by the Kyiv authorities, as well as by American representatives, regarding the clause in the 17 April statement on the need to vacate all - we stress - all illegally seized buildings, streets and squares, are totally incorrect. In one of her interviews, US Assistant Secretary of State Victoria Nuland even said that people rallying in Kyiv have the right to hold rallies in "Maydan Square", because there is a certain license for that, not issued by anyone, while people rallying in South-East Ukraine do not, so they say, have that right. That's what their "democracy," in quotes, is like."

"What looks even more absurd is a statement by Kyiv's appointee in Dnipropetrovsk Region, the oligarch I. Kolomoyskyy, on his willingness to pay a reward for the capture and handover of individuals deemed by the current Kyiv authorities to be undesirable."

"The Russian side once again insists on the immediate de-escalation of the situation in South-East Ukraine, the withdrawal of Ukrainian army subunits and the start of a real internal Ukrainian dialogue encompassing all the country's regions and political groups."

Comment: Lavrov's interview drew on the above statement, but was far more direct. His statement reinforces the NightWatch judgment that the four parties reached no agreement in Geneva.

Ukraine: The ultra-nationalist Right Sector is forming a special battalion in the Donetsk region of eastern Ukraine, according to Interfax-Ukraine.

Comment: If this report is accurate, paramilitary attacks by a unit such as this would precipitate Russian military intervention.

NY Times tech journalist complains about online attack, omits that the comment was a paraphrase of her own words
Hotair
The Truth About The ‘Black National Anthem’
Redstate