Muslim Brotherhood Determined to Cause Destruction 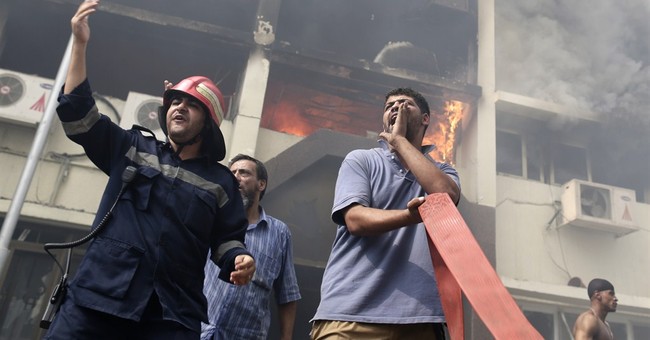 Egypt:Supporters of the Egyptian Muslim Brotherhood stormed and torched a government building in Cairo on Thursday. Similar attacks occurred in other cities. That appears to be a consistent pattern in Brotherhood resistance efforts. The Brothers have no coherent strategy for attacks, but they remain determined to cause destruction.

The leadership of the Tamarrud (Rebel) Campaign - which supported the overthrow of Mursi -- urged Egyptians to form vigilante groups on Friday, 16 August, to protect their homes, mosques and churches against terrorism.

The general coordinator of the Tamarrud Campaign, Mahmud Badr, told the state-run TV that the campaign is sorry for the ongoing violence and terrorism occurring in Egypt especially terrorizing Egyptians with fire arms, burning public facilities and attacks by terrorist groups in Sinai. The campaign underlined that what is happening is an organized terrorism not peaceful protests.

Comment:Egyptians are deciding the future of Egypt. The government appears to be succeeding in the political breakout. The Brothers have refused to compromise and that stance has led to clashes. More are likely.

Western mainstream media have not reported the formation of pro-government militias to fight the Brotherhood. The Western media treatment of events in Egypt appears incongruent with Egyptian sentiment about the Brotherhood. What is clear is that no peaceful protests took place anywhere in Cairo.

In Sinai, armed assailants stormed a checkpoint in the city of Al-Arish, leaving 10 army conscripts dead. A separate attack on the police station in Al-Arish left one policeman dead.

Comment:Militant attacks remain at one per day. Israeli air attacks and Egyptian ground operations appear to be successful in preventing any significant expansion of insurgent and terrorist attacks in Sinai.

"While, Cairo appreciates the US concern over the developments in Egypt, it had hoped that things would have been understood correctly and for all the facts on the ground to be realized. In this regard, the Presidency would like to assert the following:

Thirdly, the Egyptian Presidency regrets the loss of Egyptian lives and is working hard to restore civil security and peace. The presidency also asserts it full responsibility toward protecting the nation and the lives of its citizens.

Fourthly, the presidency fears that the statements, which are not supported by facts, will contribute to strengthening the armed violent groups and encourage their hostile approach to stability and democratic change, which impedes shaping the future road map that Egypt insists on achieving as scheduled starting with the constitution, parliamentary elections, and presidential elections.

Fifthly, Egypt appreciates the loyal stances of the world's states; however, it firmly stresses its complete sovereignty and independent decisions, and enforcing the will of the people, which started on 25 January and 30 June for a better future for a great nation."

Comment:The Egyptian President said,in essence, that the US President does not understand the situation, is not well informed and his remarks might have encouraged armed violent opposition.

UN:Egypt's Representative to the UN, Al-Hayah al-Yawm, said on Thursday that the Russian and Chinese representatives to the UN support the Egyptian position.

Comment:Two analyses this week have commented on the irony of the Russians and Chinese being perceived by Egyptians as the sponsors of secular government in contrast to the US, which is perceived as the supporter of Islamist government.