Taliban Escalates War Against the West 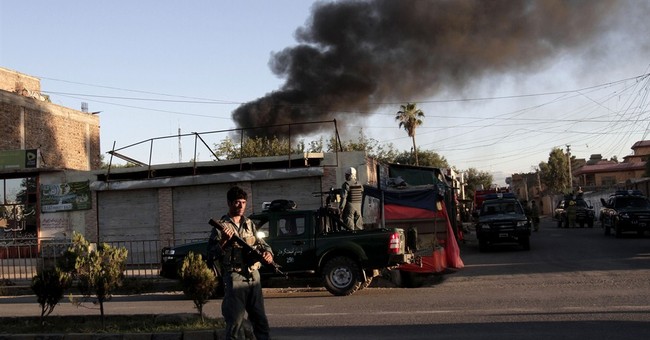 North Korea - South Korea: The North Korean party daily Rodong Sinmun published an article on 6 August that mentioned the Kaesong industrial complex in passing in the context of the deterioration of North-South relations.

Comment: This is the first time any North Korean medium has mentioned the industrial complex since the South's final offer of talks. The article contained no comments conveying a willingness to talk, except for the fact of its publication.

Japan: Japan launched on 6 August its largest military ship, Izumo, which displaces 19,500 tons and whose deck is 248 meters (814 feet) long and 38 meters wide. The "Izumo" will become fully operational in March 2015. It is a helicopter carrier, but the Japanese call it a destroyer. A second ship of the class is under construction.

Chinese media ran factual accounts of the announced characteristics and mission of the new ship.

Comment: The ship has a flat, straight flight deck that resembles light aircraft carriers in World War II, but it has no catapults for launching fixed wing aircraft. Vertical takeoff fighters could use the ship, however.

The announced missions are national defense support for other self-defense force activities and humanitarian relief operations. The ships will add flexibility and sustainability to Japanese operations in defense of their offshore islands.

The Japanese publicity appears partly intended to ensure the Chinese know Japan is enhancing its capabilities to defend its islands that China claims. Chinese coverage of the event registers that authorities in Beijing got the message.

Pakistan denied that there had been an exchange of fire. The Foreign Ministry said it was committed to restarting talks.

Comment: Indian officials fear that as NATO reduces combat operations in Afghanistan, Islamic militants will shift focus against Indian Kashmir. Some politicians said that this incident might be the start of that trend.

The connection appears to have been dormant in the past ten years, but not ended. Pakistani intelligence entities had a role in establishing and facilitating the connection in that they supported the Afghan Taliban government and the Kashmiri militants.

It is not yet clear that a new surge in infiltration and attacks is beginning. Two things that are clear are that combat operations in Afghanistan are down and that entities in Pakistan remain dedicated to preventing successful talks between India and Pakistan.

Afghanistan: Afghan Taliban leader, Mullah Muhammad Omar, published his annual Id al-Fitr address, which commemorates the end of Ramadan. The address contained several familiar themes. Most important for NATO forces is that Omar urged the Taliban to continue to attack foreign forces in the name of all Afghans. He said he would support only a fully Islamic government and denounced the current government in Kabul as a bunch of "hirelings" and urged Afghans not to work with them.

"I reiterate once again that we do not think of monopolizing power," he said in the statement. "Those who truly love Islam and the country and have commitment to both, whoever they may be or whichever ethnicity or geographical location they hail from, this homeland is theirs." He also denounced democracy as a waste of time.

Comment: Western media coverage of the address cherry-picked the headlines. Some interpreted the quote above as an assertion that the Taliban no longer intend to take power after NATO forces depart. That is wishful thinking that takes the comment about monopolizing power out of the context of establishing a fully Islamic state.

Tunisia: The elected National Constituent Assembly suspended its work until the government and opposition open negotiations to settle the political crisis with the opposition.

"I assume my responsibility as president of the ANC (assembly) and suspend its work until the start of a dialogue, in the service of Tunisia," its speaker Mustapha Ben Jaafar announced on state television, meeting a key demand of the protesters.

The secular ally of the governing coalition led by the Islamic movement Ennahda was referring to the crisis sparked by the July 25 murder of Mohamed Brahmi that has already prompted many opposition members to boycott the ANC.

Comment: The suspension of the Constituent Assembly makes some form of referendum on the government highly probable, if the government is to avoid ordering a violent crackdown or to avoid resigning under opposition pressure. The political crisis is heading towards a point of climax.

NightWatch is brought to you by Kforce Government Solutions, Inc. (KGS), a leader in government problem-solving, Data Confidence® and intelligence. Views and opinions expressed in NightWatch are solely those of the author, and do not necessarily represent those of KGS, its management, or affiliates.