Michelle Obama Needs To Get Over Herself 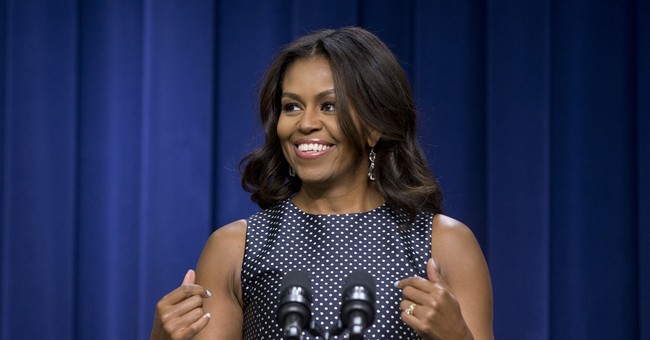 First Lady Michelle Obama has got a tough life. On Stephen Colbert Tuesday, she purported to long for the simple things in life--and vowed to enjoy them--as soon as her husband’s Presidential term expires. These things included such pedestrian activities like shopping and driving with the windows down. To wit:

“I also wanna do little things like, you know, open a window. I wanna go to Target. I wanna drive. I can’t open my windows. I really can’t [...] One day as a treat my lead agent let me have the windows open on the way open to Camp David, it was like five minutes out and he was like ‘the window’s open, enjoy it.’”

Isn’t that sweet? The wife of the leader of the free world wants to just open the windows, feel the breeze blow through her hair, and appreciate the little blessings in life. Isn’t it tragic that her position as FLOTUS prevents her from such travesties? I mean, on the way to Camp David, a fortified bastille--it’s purpose among other things, to keep the President’s family safe; our country’s Secret Service agents protecting her--she’s still just longs to open the windows. Queen Elsa’s frozen fate is nothing compared to Mrs. Obama’s, but like Elsa she too is quarantined, protected, and the cold (air) doesn’t bother her anyway.

It’s fun playing dress-up--who doesn’t love a fairytale? In this case, Mrs. Obama has lived a darn- close narrative of a Disney movie, complete with enemies and whining, a dashing prince, and warm fuzzies at the finish. The problem is Mrs. Obama likes to pretend like she’s not living a fairytale. She likes to go out in the real world (television), pretend to be a “woman of the people” and want the same things they want, when she’s lived a narrative that couldn’t be more different.

Sure, she’s one-half of a dynamic duo whose job is to steer the greatest country ever through economic recessions, complicated foreign policies. and terrorist threats, foreign and domestic. As I’ve said before, I wouldn’t want her job--or her husband’s--in a million years, for any amount of money. But she has had a few legs up, ones many people would call fortunate.

After attending Princeton, she attended Harvard law school and she proceeded to work at one of the most prestigious law firms in the country, Sidley Austin, where she met Barack Obama. Her children attend Sidwell Friends, a prestigious, expensive private school. As is customary and expected of the First Lady’s position, she attends many events, ceremonies and parties on our country’s behalf. She does so with style--opting for custom-made Vera Wang and Jason Wu.

That’s all well and good--though some might say excessive--but does that sound like a woman who longs to shop at Target above all else?

Playing the Victim, Being the Hero

Despite living the high-life, pressures notwithstanding, Mrs. Obama continues to use her public speaking opportunities--whether at colleges or on television--to pretend some kind of a victim, as if that will make her more relatable. As she said while speaking to graduates at Tuskegee University in Alabama, “[O]ver the years, folks have used plenty of interesting words to describe me. One said I exhibited ‘a little bit of uppity-ism.’ Another noted that I was one of my husband’s ‘cronies of color.’ Cable news once charmingly referred to me as ‘Obama’s Baby Mama.’”

Really? She has a collegiate audience captive to her thoughts for half an hour and she tells them a story of victimhood? I’m so sorry you poor, sad, educated world traveler. How was your summer vacation in Italy that cost taxpayers upwards of $600,000? I hoped you packed Kleenex and wiped them from your cheeks before they dripped into the Gelato you ate while journaling the sob stories you collected there.

Colbert asked Obama another interesting question, referencing the letter Mrs. Bush left President Obama when the Bushes exited the White House: "Without naming names, if we have a female president next, would you leave a letter for her husband? What would you say? What's the thing he needs to know more than anything else about the job?" Mrs. Obama replied, "I would say, follow your passion, just be you."

Can you handle the precious, mushy goodness? Just be you. Of course. But wait: Is Mrs. Obama the person who wants to shop at Target? Or the person who currently has, at her disposal, a personal chef, Vera Wang dresses made for her, $11,000 date nights in New York City and Secret Service agents surrounding her 24/7? Not to mention, to critics who will claim this is just her current job, she’s not actually all that highfalutin, the J.D., and the private schools, and the career at Sidley Austin to fall back on when her White House years are over.

Something tells me driving with the windows down to shop the $1 at Target is far from the life she claims to want to live, but a tale spun to help constituents like her more. What’s worse than Queen Elsa’s happy ending with Elsa happy and kingdom safe? A Queen who continues to suffuse a facade that she’s trapped in an ice castle and only longs to be free. Mrs. Obama needs to get over herself and she needs to let it go.