Nicole Neily
|
Posted: Apr 25, 2018 12:01 AM
Share   Tweet
The opinions expressed by columnists are their own and do not necessarily represent the views of Townhall.com. 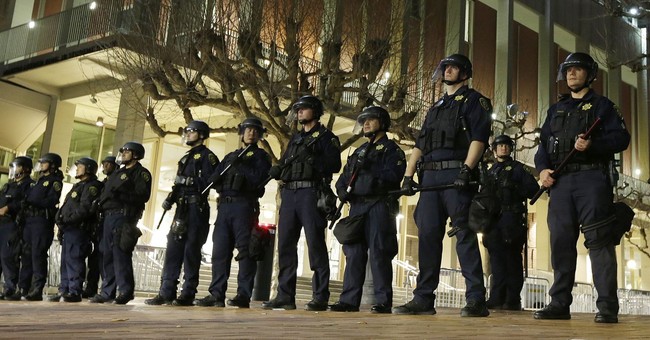 As 3.6 million high school seniors prepare to make the biggest decision of their short lives, they might want to keep two words in mind in the runup to College Decision Day:

Why “let the buyer beware”? Because sometimes schools promise students one college experience and deliver quite another one.

In particular, students and parents might want to pay attention to how university administrations react to problems on campus.

Last week, law students at the City University of New York disrupted professor Josh Blackman’s guest lecture by shouting inane slogans, standing on stage, and preventing him from giving his original presentation. Although Frederick Douglass once said “[t]o suppress free speech is a double wrong. It violates the rights of the hearer as well as those of the speaker,” apparently the school’s dean, Mary Lu Bilek, disagrees. She dismissed criticism of the event by asserting that the protesters’ actions were within bounds. As George Mason University professor David Bernstein acerbically notes, “we now know that the law school's official position is that eight minutes of disruption is ‘a reasonable exercise of free speech.’”

Perhaps families of prospective CUNY students might be interested in learning that the dean doesn’t value either their time or their First Amendment rights very much.

Some families might choose to send their child to a religious-affiliated institution, assuming that the school’s mission comports with their worldview. Although this may be true in some places, it most certainly was not the case at Providence College, a Dominican university in Rhode Island. In March, senior Matthew Smalanskas found this out the hard way.

Smalanskas worked as a resident advisor (RA) in an on-campus dorm, where RAs were encouraged to post billboards to stimulate discussion. Prior to spring break, he decided to post a display promoting traditional marriage – which, as a former seminarian, was a belief that he thought would be non-controversial at a Catholic school. The display was torn down several times, and angry mobs of students gathered in his hall. At one point, campus security removed him from his room, moving him to another location for his own security. As Claire Chretien of LifeSiteNews documents, Smalanskas faced nonstop harassment and threats – including an anonymous student posting a cartoon in the bathroom that showed him being raped.

The school’s response? A halfhearted investigation into the cartoon artist – which has been inconclusive – and a request that Smalanskas attend a march in support of LGBT rights as a show of unity. Beyond that, he has been met with total silence. Smalanskas wrote twice to the school’s president, Father Shanley, asking to meet – and was ignored. Smalanskas’ father reached out and received a form letter in response. A concerned alumnus wrote to Shanley and got no response.

Perhaps families of prospective Providence College students might be interested in learning that not only does the school’s administration not stand by the Catholic teachings which they were founded upon, but also that they don’t prioritize the investigation of threats against students.

At the University of California - Berkeley last year, violent protesters forced the cancellation of an event with Milo Yiannopolous – setting fires, throwing Molotov cocktails and fireworks, and attacking bystanders. No arrests were made.

Perhaps families of prospective UC Berkeley students might be interested in learning that the school’s administration doesn’t place a high priority on enforcing existing campus policies on violence and assault.

Given the exorbitant cost of a four-year education, parents owe it to their children to do their due diligence on problems that have occurred at the schools that their children are considering. It’s no coincidence that enrollment at the University of Missouri dropped by more than 30 percent in the wake of the school’s 2015 protests, and by nearly 20 percent at Evergreen State University following last year’s character assassination of professor Bret Weinstein.

By providing students, parents, and concerned bystanders with information on campus policies and adjudication, families will be better able to make informed decisions on where to enroll – preventing disappointment and frustration when rights aren’t respected or administrators look the other way when bad behavior takes place.

Sadly, with college as with all other major investments – the buyer must beware.