Avatar: The Atlas Shrugged of the Left 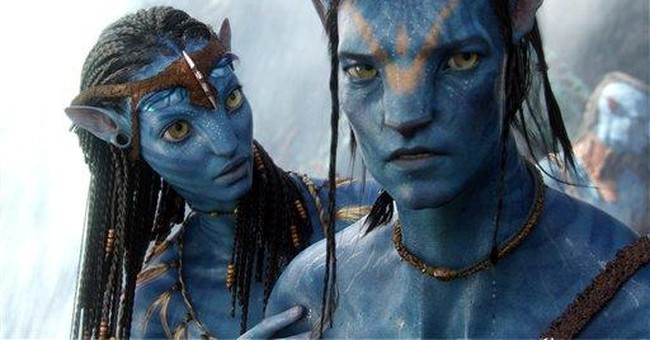 For 52 years now, Ayn Rand’s Atlas Shrugged has stood alone as the shining example of political allegory. Rand's novel has long been considered to be essential reading for American individualists and advocates of free markets. The American left on the other hand has not had a work of fiction that definitively embodies their worldview. Avatar might just fill that void. While the two stories are powerful, their messages are diametrically opposed.

Rand and Cameron hold up their protagonists as paragons of virtue and rely heavily on archetypes to get their point across. While these archetypes cause the characters to be somewhat wooden, they are very romantic, making them very attractive to audiences. Rand’s ideals are represented primarily by three characters, inventor John Galt, Railroad mogul Dagney Taggart, and Steel baron Hank Reardon. Cameron’s ideals are embodied by the blue skinned alien race, the Na’vi.

Rand’s protagonists find their virtue in their individuality. Galt, Taggart, and Reardon are all champions of industry, drawing their strength from their dedication to their respective crafts. Each character is an industrial revolutionary of sorts, with their groundbreaking ideas and creations going largely unappreciated in a society that is rapidly collectivizing. Their strict adherence to an individualist moral code drives them to actualize their ambitions in the forms of innovations that improve everyone’s quality of life, despite the collective’s efforts to handcuff them.

Cameron’s protagonists on the other hand find their virtue in their collective identity. The tribal Na’vi are portrayed as an idyllic collective with a distinct lack of individuality. Members of the tribe have little character of their own and are accurately described as a sea of blue.

Cameron exalts the primitivism of the Na’vi. Unlike Galt, Taggart, and Reardon, who seek to physically transform the world around them for the better, the Na’vi merely subside off the land. Their existence is static, unchanged since the days of their ancestors. Meanwhile, according to Cameron, mankind’s industrial pursuit is purely exploitative. Giovanni Rabisi’s character Parker is a heartless and one-dimensional hack for an unnamed earth based company seeking to mine a highly coveted element called Unobtainium. His obsession with material wealth seems to blind him and drive him to commit atrocities. This theme is the classic condemnation of capitalism; that wealth created not through innovation as Rand seems to suggest, but rather through exploitation.

Another stark contrast exists in Rand and Cameron’s chosen settings. As her largest set piece, Rand chose the concrete jungle of New York City. She painted a portrait of a slowly deteriorating city, whose once beautiful architecture had fallen into disrepair due to collectivist dogma. In sharp contrast Pandora, the backdrop of Avatar and home to the Na’vi, is an unmolested utopia. In keeping with the modern “green” fantasy all creatures live in harmony with their surroundings, while it is suggested that mankind has exploited its natural resources to such a great extent that they have left earth with no vegetation. The Na’vi would almost certainly see Rand’s New York as blight upon their lush landscape.

There’s one place where Cameron fails to hold a candle to Rand and that’s in originality. While Rand’s characters were illustrations of a moral system of her own creation, Cameron’s are mostly well worn clichés.

Much of Avatar has an odor of recycled material to it (and not in the green sense.) For example Neytiri, the Na’vi love interest of the main protagonist and the Na’vi character with the most depth, fails to offer viewers anything they haven’t seen before. Her relationship with turncoat marine Jake Sully is a love story that can be found in the vast majority of today’s romantic comedies. Even Cameron’s casting choices seem uninspired and obvious; a veteran Native American actor as the Na’vi tribe’s proud patriarch; an African American woman as tribe’s soulful spiritual leader. It would be safe to say that Cameron’s casting couch didn’t get too much of a workout during Avatar’s pre-production.

One would struggle to find two world views that are more opposite than those of Ayn Rand and James Cameron, but both have found success in crafting stories with very little moral ambiguity. In the end, Atlas Shrugged is a story of the triumph of the individual over the collective, while Avatar is an amalgamation of Hollywood and the liberal left’s collectivist political fetishes. While both works will undoubtedly delight those who are predisposed to their respective ideological tenants, it remains to be seen whether or not Cameron’s Avatar will hold up to the test of time as Rand’s masterpiece has.