Gutting the Tomahawk is a Shortsighted, Strategic Misstep for the United States and its Allies 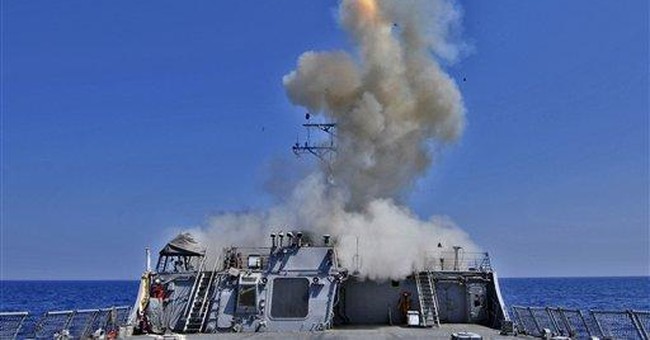 As the US government tightens its fiscal belt, it is important for policymakers to consider that cutting key programs can create ripple effects far beyond US borders. A prime example is the Tomahawk missile.

The quick, quiet killing of this program has major implications for the United States, its national interest and foreign policy. Gutting a missile program as successful as Tomahawk sends a concerning message to the US’ allies and adversaries alike, and will significantly hurt the US’ interests in selling defense systems abroad.

The US has possessed a key comparative advantage with its ability to protect its national interest around the world by projecting its military power and in turn keeping its enemies at an arm’s length. This projected power comes from the US’ possession of vital weapons such as B-52 aircraft carriers, Aegis ships, the Tomahawk cruise missile, and several key military installations around the world.

In deterring enemies, the Tomahawk missile has proven to be first-rate. Tomahawk has the ability to suppress enemy air defense systems without putting service personal in harm’s way—in an inexpensive and highly efficient manner. It also allows for the precise and accurate targeting of individual marks, providing the US an industrial scale capability that no other nation posses and that no other nation can counter.

Discontinuing the Tomahawk means the Pentagon will have to restrict their mission decision making to the number of missiles left in the US arsenal, severely limiting the US’ capacity to act in any future conflict.

Ending the Tomahawk program will not just have tactical implications for warfighters, but will also impact this US’s interests abroad, specifically in terms of its relationships with its allies and partners. Both The United Kingdom and Australia envisage the use of the Tomahawk cruise missile as part of their future defense strategy. Further, the UK has spent considerable amounts of money configuring its weapons platforms to be able to fire Tomahawk. Yet, when the British defense secretary recently visited Washington DC, he was roundly embarrassed by not being informed of the US’ decision to end the program and was thus unable to answer the most basic of questions about a replacement for Tomahawk.

The abrupt nature of the cancellation of this program and lack of courteous consultation sends the wrong message to US allies, who are looking to co-operate with the US on future programs. Eastern European countries, India and South-East Asian countries all want the certainty of an alliance with the US. Yet, they will be forced into reexamining their partnerships when they fully understand the implications of the US Administration’s cancelation of the Tomahawk program. However, they may reconsider their options when they realize that the costly weapons system that they are buying into could be cancelled at a moment’s notice. Additionally, these countries are only capable—financially and structurally—of adsorbing one or two large ticket defense purchases per economic cycle, so they must carefully consider which weapons systems are more likely to last for 10 to 15 years.

Halting the Tomahawk missile program could also have severe unintended consequences to the US defense industry. Just as the very effective, battle tested Tomahawk is being defunded, countries like India, Russia and Israel are looking to sell their own cruise missiles to many Asian, African and Middle Eastern customers. Particularly, the Indian cruise missile called BrahMos that is being readied for a large number of export orders, with projected sales as high as $13 billion. Yet the very failings of the BrahMos—lack of industrial capacity, no battlefield testing, large size and relative complexity—are all comparative advantages that the Tomahawk program retains.

If the US defense establishment believes that it is finished with the Tomahawk program, then it would be a prime weapons platform for export. This would allow a capital injection into the program while also allowing the US to cement alliances, and also create and expand upon new markets. Further, the export of the Tomahawk would be symbolic, representing a bond between the US and the buyer nation. This relationship would have further benefits, especially in South-East Asia, engendering a greater sense of stability and certainty amongst counties that are concerned about the rise of China.

Ultimately, defunding Tomahawk creates a worrying gap in US capabilities that no known replacement has the ability to fill in the near future. The abrupt and covert cancellation of this successful program embarrassed allies and will cost them a considerable amount of money, as they will now have to seek viable replacements. Ending the Tomahawk program sends the wrong signal to friends and allies seeking the certainty of defense cooperation with the US.

Finally, the lack of strategic insight by US defense officials means a tried and tested weapon with a strong industrial base will be shelved. All in all, the US’ decision to cancel the Tomahawk cruise missile program is a shortsighted, strategic mistake that has very real world implications beyond the US’ borders.

With Police Being Attacked and Under Threat of Being Defunded, July Gun Sales Were One for the Record Books
Matt Vespa
Former MSNBC Producer Explains Why She Left in Blistering Letter
Leah Barkoukis
One Democrat's Hypocrisy Soars to New Heights... All Over National Parks
Beth Baumann
Karen Bass Previously Praised the Church of Scientology and Now It's Biting Her In the Butt
Beth Baumann
Why President Trump Is Calling for a Revote In a Primary Election
Beth Baumann
Pro-Police Groups Paint Nation's First 'Back the Blue' Street Mural in Tampa
Madeline Peltzer