Donald Trump – Winning Like It’s the 1980s All Over Again

Nick Adams
|
Posted: Apr 27, 2016 12:01 AM
Share   Tweet
The opinions expressed by columnists are their own and do not necessarily represent the views of Townhall.com. 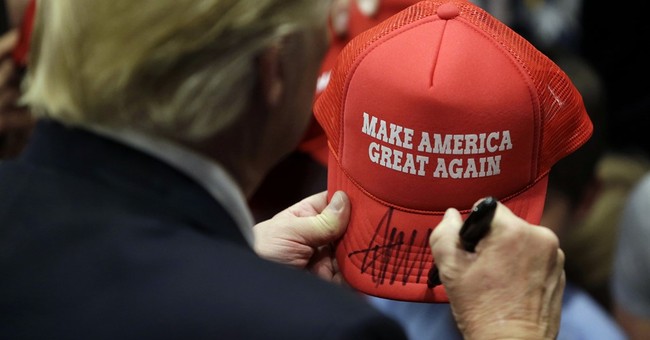 As a Reagan baby, I’ve always loved what America in the 1980s stood for.

There was a new conservatism in social, economic and political life, characterized by the policies of President Ronald Reagan. There was the explosion of blockbuster movies. The emergence of cable networks like MTV. Families going to a local park for a picnic, with a basket and blanket, and a kite. Families gathering together to watch the latest episode of Moonlighting, Full House and Who’s The Boss?

It was exciting, optimistic, unapologetic and creative.

Bacon and eggs, peanut butter and jelly, cheese and macaroni, pancakes and maple syrup… some things just go together. And so it was, with America and the 1980s.

America was dominant. Big and flashy. Bold and strong. Positive and proud. Confident and a force of nature. The President was superb and reassuring. Cultural walls fell down – Americans were more united. The movies were terrific. The music was sensational. The patriotism unquestioned. The moral clarity unpolluted. Nuance limited. It was a simpler time. Rambo was kicking butt (while Reagan watched on in the White House). Rocky was defying odds. John McLane was killing terrorists. Maverick and Goose were buzzing the tower in Top Gun.

America was at her zenith.

So it is only fitting and logical the man that we prominently associate with that decade wants to make America great again.

The Donald Trump campaign has a distinctly 80s feel to it. Not to mention the very 1980 sentiment of the electorate. Dissatisfied with a feeble and feckless President, and liberal, Democratic big government, voters feel down on their luck and deeply concerned about the future. It was in this climate that while many people considered Reagan too extreme and simplistic, opposition to the status quo ran so deep that the American people decided to give him a chance.

In an era remembered for its movies, the 2016 election is playing out as a 1980s movie, with Donald Trump starring as the ultimate action hero, against several ‘villains’.

The script is clear: America is struggling. Stuck in a downward slide, teetering on the precipice of debt-riddled mediocrity, things look glim. Suddenly, the last action hero remaining of an earlier era has heard his siren call. He’s all alone, and can’t rely on anyone else. But he’s arrived on the scene and is coming for all enemies – foreign and domestic – the system, political correctness, the ‘villains’, and any authority providing them refuge – to save America, all just in the nick of time.

Trump is in many ways the 1980's retro-renaissance man who has come back to save America and restore it to its greatness, by killing political correctness and resurrecting 1980s sentiments and values. Might is right, and America is always right.

And he's bringing out all of the 1980's hotshots out of hibernation to Make America Great Again with their last breath. Clint Eastwood, Bruce Willis, Kirstie Alley, Jean Claude Van Damme, Gary Busey, and countless others. It seems they are all coming out of their collective hibernation to support the man who can make America what it once was: great again, just like it was in the 80's.

But the 80s references don’t end there…

Trump is bringing in the Al Bundy vote. The A-Team love him. Alf thinks he’s great. As Long As We’ve Got Each Other is playing...

But it is undeniable. Trump appears to live by the action hero script. That script is clear. The stage is set. A diverse assortment of Americans are watching the movie, once more awaiting a new populist conservative movement, similar to the one of the 1980s.