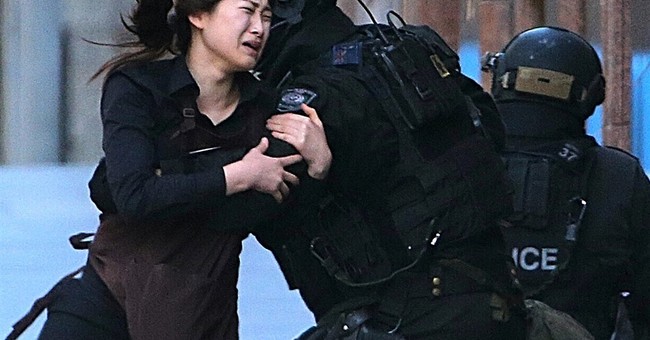 Australia is known as the “lucky country”.

It was a phrase first coined in 1964 by social critic Donald Horne, and has come to represent the visceral feelings of both Australians, and visitors to the nation.

It is seen as a reflection of a high standard of living, and a geographical insulation from the bad actors of the world theater.

But ten days out from Christmas, Australia has lost its innocence.

As a native of Sydney, home for the holidays, safe and sound but shaken and furious, December 15 is one that will forever be seared into my mind. I’ve been to the Lindt Café; in fact, I once worked across from it. Emotions have run high all day- from fear to anger to a desire for vengeance. These were scenes I never expected in my Sydney.

On a day of brilliant blue skies, the terrorism of the post 9-11 world finally arrived on Australian soil, taking hold of city streets.

A man wielding a gun and an Islamic flag took customers and staff hostage at a cafe in central Sydney. Fifteen hours later there remains no end in sight.

The profoundly shocking standoff with all its disruptions to city life has struck fear in Sydneysiders, unaccustomed to these types of events.

The mood in Sydney is one of fear and uncertainty.

Until now, Australian authorities have been flawless in preventing terror attacks on Australian soil. They have been aggressive in their pursuit of intelligence and would-be terrorists, foiling plot after plot. September saw the biggest anti-terrorism operation in Australia’s history, involving up to 800 police in coordinated raids, sparked by intelligence reports that Islamic State supporters were planning to seize a random member of the public and behead them live on camera.

Yet, it was inevitable that one would finally slip through the cracks, and today Sydney joined the ranks of cities such as New York, London and Madrid as the latest victim of Islamic terrorism.

The distressing events of today have renewed Australians’ concerns about Islamist objectives, and a growing Islamic presence in Australia.

Some Australians recognize that this terrorist attack is a result of the poor immigration decisions of Australian governments, both conservative and liberal, over the last four decades.

A lack of liberty, an abandonment of reason, the imposition of Sharia on Muslims and non-Muslims, as well as the treatment of women are just some of the serious moral problems within the Muslim world. Islamist views are incompatible with the liberty enjoyed by Australians and Americans.

With Islamic supremacism a mainstream interpretation of Islam, deeply rooted in Islamic scripture and endorsed by many of Islam’s most influential scholars, Australians are beginning to understand the nature of the Islamic threat, and studying their own weaknesses in its wake.

The United Kingdom has had two beheadings of members of the public in the last two years, with neither Police nor civilians able to prevent it. It has prohibitive gun laws.

Australians are looking to America, and not the UK for guidance.

With this sort of threat, the normal calculus of a civilized society with a small, armed (or unarmed) police force upon which the citizens are forced to rely, no longer adds up.

It is unsurprising that home-grown terrorism is most rampant in nations with strict gun control. It is a reality that Australia’s powerful anti-gun lobby seems to wish to ignore.

It is times like these that Americans should be thankful for their Second Amendment, and crush any effort or force seeking to weaken or remove it.

Right now, they are the envy of a growing number of Australians that wish they were armed.

Australia will never be the same again. Sydney just lost a little of its shine.

Nick Adams is an Australian best-selling author, speaker and political commentator. He is best known for his work in the field of American exceptionalism, and is credited with a resurgence in the idea worldwide. A regular on Fox News Channel, Fox Business Network, C-SPAN and nationally-syndicated radio, Adams has received several state awards, being appointed an Honorary Texan by Governor Rick Perry in 2013. He is a Centennial Institute Fellow at Colorado Christian University. He is the author of the book: The American Boomerang (2014). He can be reached on Twitter @NickAdamsinUSA. His website is www.nickadamsinamerica.com.