Nicholas Waddy
|
Posted: Jan 10, 2018 12:01 AM
Share   Tweet
The opinions expressed by columnists are their own and do not necessarily represent the views of Townhall.com. 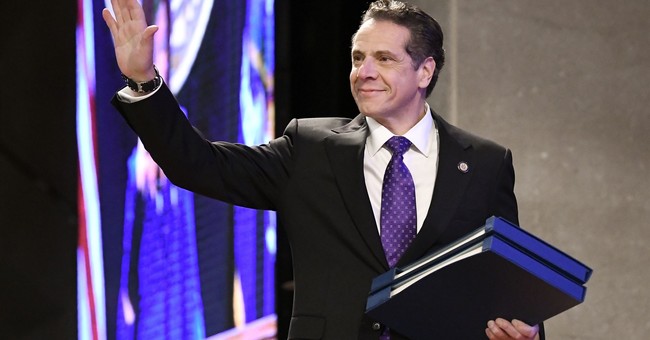 Perceptive conservatives will have noticed by now that the self-righteousness of the left increasingly knows no bounds.  To put it another way, there are very few people, companies, institutions, bureaucracies, or governments left that liberals have not excoriated, picketed, boycotted, or sued, all in an effort to extirpate from this planet whomever and whatever has the audacity to contradict them.  Amusingly, this tendency towards perfectionism/sanctimony often pits leftists against one another.  In the end, though, the damage that this epidemic of intolerance does to the fabric of American society is serious and lasting.

Recently, New York Governor Andrew Cuomo unveiled a proposal that would take his fellow New Yorkers, i.e. his dutiful subjects, as he seems to think of us, deeper down the rabbit hole of leftist self-congratulation.  He has voiced support for divesting the New York State Common Retirement Fund, directly affecting more than one million New Yorkers, from companies “with significant fossil fuel-related activities.”  Presumably this means energy companies, although no one knows for sure how extensive the governor's environmentalist dragnet might prove to be.

The putative goal of such a divestment strategy would be to undercut the operations of some of the primary contributors to climate change.  The truth, however, is that Gov. Cuomo is positioning himself for a run for president in 2020, and to that end he must appear to be the purest of the pure in terms of his commitment to leftist ideals.  He must therefore demonstrate a level of scorn for non-leftists that exceeds anything else that a Democratic politician has ever conceived.  He is well on his way to achieving that objective, since even commonsense Democrats regard his recent proposal as half-baked extremism.

First, there is the obvious problem that the purpose of New York's pension system is not to trumpet the political virtuosity of the state's governor.  It is rather to support New York's retired civil servants, police officers, and firefighters in their retirement years by investing the state's pension funds in a way that achieves diversification and a high rate of return.  This maintains the solvency of the system, and it eliminates the need for the state to step in and spend taxpayer dollars to make up any shortfall.

Studies have shown that Governor Cuomo's proposed divestment from fossil fuel producers would harm New York's pension system by depriving it of access to the high returns that such companies commonly yield.  For example, New York’s Suffolk County Association of Municipal Employees commissioned a report that found that the Common Retirement Fund would lose $2.8 billion over 20 years if it pursued divestment.  Cuomo is thus endangering not only the financial futures of New York retirees, and prospective retirees, but also the fiscal health of New York State and numerous local governments, which are ultimately responsible for meeting all pension obligations.

Second, there is no reason to suspect that a divestment of New York's pension fund from major energy companies would have the slightest impact on their operations or on the pace of climate change.  Divestment may give leftists a warm glow of self-satisfaction, but it would not obviate the reliance of the American economy on fossil fuels.  On the contrary, it is much more likely that such an action would be counterproductive, insofar as the involvement of state pension funds in the energy sector as major stockholders puts pressure on the industry to pursue a gradual transition to renewable energy sources.  Indeed, the managers of the New York State Common Retirement Fund have notched notable successes in encouraging energy companies to prioritize countermeasures to the threat posed by climate change.  According to New York Comptroller Thomas DiNapoli, who has authority over the Common Retirement Fund, “We believe that we can actively engage with companies in building a cleaner, sustainable global economy.” Cuomo would thoughtlessly throw away this leverage in order to pontificate and grandstand.

Third, Cuomo's proposal suffers from the same logical flaw as every other assault on energy companies: it makes no sense to persecute energy producers, but to ignore energy consumers.  To put it another way, if using fossil fuels is a crime against nature, as leftists seem to believe, then the simple truth is that it is a crime of which all of us are guilty, including liberal politicians.  Thus, until Cuomo ends his own personal use of electrical power, automobiles, jet aircraft, and all the other accoutrements of modern civilization, he has no right to condemn the energy companies that supply the lifeblood on which these technologies run.  Indeed, he is a hypocrite for doing so.

Make no mistake: the career politician Andrew Cuomo wouldn't know a sound investment strategy from a hole in the wall, but he can spot an opportunity for self-aggrandizement a mile away.  His latest flight of fancy should be seen for what it is: 100 percent political bunkum, which in the end could do serious harm to the people of New York.

New Yorkers should reject Gov. Cuomo's divestment scheme, which will profit Planet Earth not one iota, but which will surely threaten the profits from investments on which New York's retirees and ultimately its taxpayers depend.