Nicholas Horton
|
Posted: Apr 14, 2016 12:01 AM
Share   Tweet
The opinions expressed by columnists are their own and do not necessarily represent the views of Townhall.com. 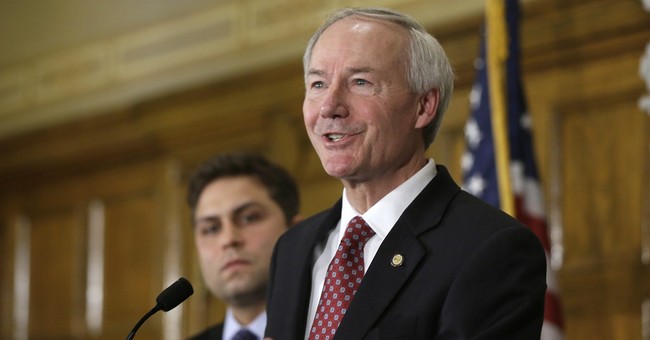 In a special legislative session called by Governor Asa Hutchinson last week, Arkansas lawmakers passed a bill to renew Obamacare’s Medicaid expansion and rename it “Arkansas Works.” Under the new law, the state will ask the Obama administration for a few cosmetic (and one disastrous) tweaks to their existing expansion, which was scheduled to end in December.

But there’s another big hurdle Obamacare expansion must clear before it can go into effect. Arkansas’ constitution requires appropriations bills to garner at least 75 percent support in each chamber.

This leaves Arkansas at an impasse and, according to the Obamacare fear mongers, there’s just no way out of the situation without 1. Keeping Obamacare expansion forever or 2. Shutting down the entire Department of Human Services indefinitely.

Good news: there’s actually a third option that doesn’t involve “shutting down the government” – and it’s an option Obamacare supporters themselves have pledged to support in the past.

The solution to the current budget stalemate is relatively simple: separate the Obamacare expansion funding from the rest of the Medicaid budget. This would allow legislators to vote on a clean DHS budget bill to ensure services for the most vulnerable aren’t interrupted. After that, legislators could have a straight up-or-down vote on funding for Obamacare.

This isn’t an unusual or unprecedented idea. In fact, when Democrats still controlled state government, Republican lawmakers used a similar move to kill funding for an Obamacare exchange that was wrapped up in the appropriation for the state Insurance Department.

And it’s logical. Obamacare expansion funding and the rest of the DHS budget are two completely separate things. One line item is a new welfare program for able-bodied adults, while the other provides resources to the truly needy – seniors, impoverished children, and individuals with disabilities. These are two legally and morally distinct groups. Legislators shouldn’t be forced to vote to fund an Obamacare expansion that hurts the truly needy in order to fund existing DHS services for the most vulnerable.

By forcing this false choice and lumping the funding together, Obamacare supporters are trying to use the truly needy as political leverage, holding them hostage unless and until opponents agree to fund Obamacare expansion. Ironically, they have directly and repeatedly promised in the past to not employ these tactics.

When Obamacare expansion was first debated in early 2013, expansion opponents raised legitimate concerns about commingling funding for traditional Medicaid with the new expansion. At the time, the chief legislative architect of the plan promised that the expansion wouldn’t “put anyone in a corner and say either we vote for expansion or we shut down Medicaid.” He committed that if the votes weren’t there to fund the expansion, supporters would “take it out and pass the appropriation to fund DHS” without Obamacare.

Senator Jonathan Dismang, the lead Senate sponsor of expansion and current Senate President Pro Tem, made a similar commitment before the 2014 fiscal session. He explained that he had “no interest in turning the DHS budget into an all-or-nothing political game.” So what would happen if the votes to fund expansion didn’t materialize? “If the DHS appropriation cannot attain the needed votes with [Obamacare expansion] included, then it will be pulled, amended, and voted separately,” Dismang said.

Less than two weeks ago, current House Speaker Jeremy Gillam made a similar promise. If the DHS budget including Obamacare expansion fails on the first vote, he said, he would allow a “second vote without Arkansas Works.”

Given these commitments, there’s no reason a clean appropriations bill, without Obamacare expansion, shouldn’t be on the table.

Sadly, holding the truly needy hostage is nothing new. The Obama administration tried something similar when Obamacare was first enacted, threatening to withhold Medicaid funds for the aged, blind, and disabled if states didn’t expand the program to able-bodied adults. The Supreme Court eventually ruled those threats unconstitutional, making the expansion optional. But it seems Washington-style politics have arrived in Little Rock.

The truly needy are already suffering in Arkansas. Nearly 3,000 Arkansans like Skylar Overman are stuck on Medicaid waiting lists. Many of them will die before they ever get the services they desperately need.

And while they wait, nearly 300,000 able-bodied adults in Obamacare expansion have been pushed to the front of the line – far more than the state thought would ever even be eligible. Higher-than-expected enrollment and higher costs ultimately mean, quite simply, fewer resources to take care of Arkansans like Skylar.

But now, pro-expansion policymakers are targeting the truly needy even more. Desperate to save Obamacare, they have resorted to sequester-style scare tactics, announcing potential cuts to the state’s fragile foster care system, highway funding, or other priorities if Obamacare funding is not renewed.

Obamacare supporters don’t have the constitutionally-required votes needed to fund Medicaid expansion. But there’s little doubt that a clean DHS budget, which would fund services for the truly needy, could pass.

Who would vote no? Certainly not Obamacare expansion opponents. They’re fighting to protect the truly needy.

Even if some of the most committed hostage takers tried to block a clean DHS budget, at least taxpayers would have a clear picture of where they stand: they would be voting against services for the truly needy in a desperate attempt to save Obamacare expansion.

Obamacare supporters are bullying opponents into giving up their principles, pushing them to betray taxpayers, the most vulnerable, and their constituents because it would just be “easier” if they voted for Obamacare expansion.

Here’s an alternative idea: stop using the truly needy as political pawns and release them from the Obamacare funding.

Arkansas deserves a clean DHS appropriation. And if the Arkansas Ten hold strong, they just might get it.