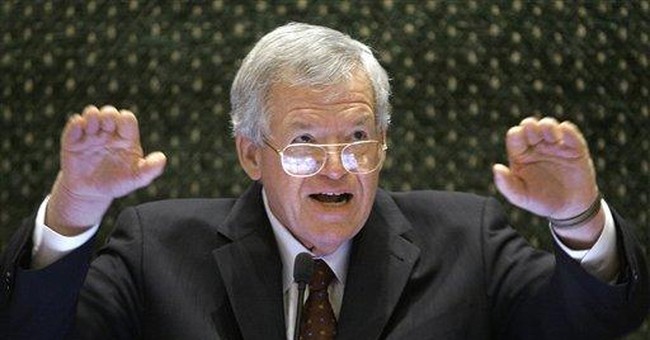 Because the flawed immigration legislation working its way through Capitol Hill is poison to conservative Republicans, Speaker John A. Boehner announced he must break the “Hastert Rule” to drag it over the finish line.

Breaking the rule will give President Barack Obama a huge victory in what should have been for him a summer of scandal and retreat.

The rule is an old concept, but practiced by former GOP speaker J. Dennis Hastert, it says that when the GOP controls the House, the Republican leadership will not move on legislation unless the “majority of the majority” supports the position.

Now, the speaker declared the rule a dead letter and signaled his desire to pass the president’s immigration agenda by building a new coalition with Democrats.

As conservatives recoiled at the heresy, members of Team Boehner reassured outsiders that under speakers Hastert and Newton L. Gingrich, the rule was violated anywhere from 18 to 30 times.

To the Republican careerists surrounding the speaker, it is not a big deal. But, the numbers involved make it a really big deal if the GOP expects to win elections.

In the House GOP today, the “majority of the majority” is housed in the 170-member Republican Study Committee, its the conservative bloc.

One gauge of the RSC’s effectiveness is that only 104 out of 242 Republicans voted for the RSC’s alternative Fiscal Year 2013 Budget. That puts the conservative terra firma in the House at slightly less than one-quarter of the body.

If Boehner holds to those 138 Republicans, who voted against the conservative budget plan, he is still short 80 votes for the 218 votes that make majority in the 435-seat House.

This is where it gets juicy for the Democrats. Minority Leader Nancy P. Pelosi (D.-Calif.) knows how to collect and hold on to votes. If she gives Boehner a number it is solid, unlike the sand dance numbers the speaker gets from his own whip Rep. Kevin O. McCarthy (R.-Calif.).

What makes Pelosi so good is that her members know that she only asks for the votes she needs, and then once she has what she needs, she frees her members to cast the vote they need to survive re-election.

If Pelosi gives the speaker the 80 votes he needs to pass the president’s immigration bill, the 103 remaining Democrats will get a hall pass on one of the most explosive issues, where they are on the way-wrong political side.

In the last session, the House Republican leadership generously gave Democrats “cover votes” on the balanced budget amendment and national concealed carry, effectively inoculating them from two of the strongest issues their GOP challengers could use against them.

Now, Team Boehner has decided to kneecap up to 100 Republican congressional candidates in 2014. Good news for Pelosi and her quest to reclaim the gavel.

After 2014, Boehner's support for the Democrats’ immigration bill will hurt the GOP for decades, as he will have helped usher in more than 12 million new Democratic voters--not a small number, since Obama beat Sen. John S. McCain III (R-Ariz.) by 10 million votes in 2008 and W. Mitt Romney by five million votes in 2012.

The Senate will complete its immigration bill before the July 4 recess and the House bill will be finished by the middle of August.

In just over three years after becoming the Speaker of the House, Boehner’s tenure has been marked with mistakes, misfires and missed opportunities. Nevertheless, the GOP seemed to survive his calamitous leadership. But when he breaks the Hastert Rule in order to hand the Democrats a victory on immigration, he may very well have dealt his party a blow it can never overcome.

Legal Experts Have Bad News for Civil Rights Suits Against Kyle Rittenhouse
Townhall
GUESS how many weeks Dr. Fauci needs to determine the threat from the omicron variant
Twitchy
Is the GOP About to Blow the 2022 Elections by Acting Like the Last Six Years Didn't Happen?
Redstate
Your Thanksgiving Weekend Round-up! Shoplifting, Black Supremacy and Antifa Weeps!
PJ Media