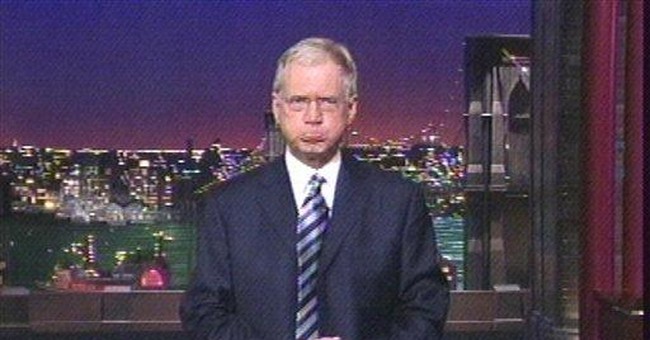 Late-night talk host David Letterman has made hundreds of millions making fun of politicians who are caught up in major scandals, especially sexual blunders. And judging by his continued attacks against Sarah Palin, one may surmise he will not change a comedic formula that's worked in garnering him millions of fans and even more millions of dollars.

It's anyone's guess whether or not Letterman's showbiz career will be damaged by his recent admission that he has had sex with women who worked for him. Letterman is a husband and father, but that doesn't seem to bother many of his fans. It wouldn't surprise me if his Nielson ratings actually climb, since far too many Americans are willing to reward bad behavior. Big difference between Letterman and those he has ridiculed is that the butts of his jokes haven't taken glee in his sexual exploits being exposed in public.

Personally, in that name of decency, I believe David Letterman should resign. But that's just my opinion. And in keeping with a Letterman trademark comedy routine, here are my Top Ten Reasons Why David Letterman Should Resign:

Number 9: Former Presidential candidate John Edwards recently went through his own sex scandal. Letterman placed him No. 1 on Letterman's "Top Ten Signs Barack Obama Is Overconfident: Been cruising for chicks with John Edwards."

Number 7: Former Alaska Gov. Sarah Palin's 14 year-old-daughter was viciously attacked by Letterman. I will not even repeat what he said.

Number 6: Former US Senator Larry Craig was arrested in a sting operation while cruising for sex with men in a toilet stall. Letterman quipped that it "gives new meaning to the word 'caucusing.'"

Number 5: Sen David Vitter, a Louisiana Republican, admitted he has been dating prostitutes. Letterman said, "And he was very generous with one girl: He paid her with a new highway project in her home state."

Number 4: Former Representative Mark Foley. While Rep. Mark Foley told reporters, "I feel sorry for David. I take no glee," during Foley's scandal, Letterman joked, "How about that Florida Congressman Mark Foley? Whoa! At least the Democrats wait until the interns are 18."

Number 3: Former US Sen. Gary Hart, a presidential candidate in 1987, was a favorite target of Letterman when he hosted a late-late night show. The gap-toothed comedian said, "Big weekend for Gary Hart, he was campaigning his brains out."

And the Number 1 reason David Letterman should resign: He is a sexual predator who has used his power to abuse those who held him in high esteem.

Liberal Blogger Notices Something About Anti-Black Crime in America...And the Woke Will Not Like It
Townhall
Dana Loesch & others have awkward reminders for 'alternative newspaper' that took a swipe at her
Twitchy
Chief Justice John Roberts Once Again Shows He's a Spineless, Authoritarian Coward
Redstate
Trump Vindicated as Judge Rules Michigan Secretary of State Violated Election Laws
PJ Media