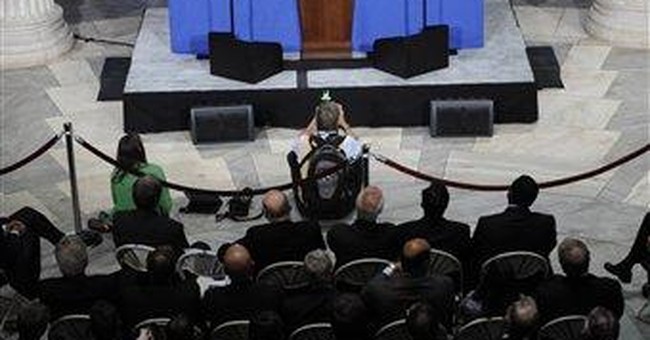 During his presidential campaign, then-Senator Barack Obama told a Christian Broadcasting Network correspondent something that should have alerted -- if not frightened every one of the tens of millions of Christians in the United States.

Obama told CBN's David Brody: "I think that the right might worry a bit more about the dangers of sectarianism. Whatever we once were, we're no longer just a Christian nation; we are also a Jewish nation, a Muslim nation, a Buddhist nation, a Hindu nation, and a nation of nonbelievers."

If that tidbit of information wasn't enough to question Obama's vision for America, he previously said in a 2007 speech that "whatever we once were, we're no longer a Christian nation."

Then he uttered his zinger: "Somehow, somewhere along the way, faith stopped being used to bring us together and started being used to drive us apart. It got hijacked. Part of it is because of the so-called leaders of the Christian Right, who've been all too eager to exploit what divides us."

While Obama professed to be a Christian, Americans soon learned his pastor and religious mentor was an America-bashing racist who found a "trusted friend" in the Nation of Islam's Louis Farrakhan, a man known for his unbridled bigotry against Jews and white Christians. Of course, being the political animal he is, Obama eventually distanced himself from his pastor Jeremiah Wright.

According to a news story by World Net Daily, Obama's comment about the "Christian Right" was mild compared to statements made by his national campaign co-manager, Merrill A. McPeak.

Once safely entrenched in the Oval Office, President Obama decided to show his true stance on Christianity.

He did away with the annual National Day of Prayer on which the White House traditionally hosted a service in its East Room. When a reporter asked Obama's press secretary Robert Gibbs about Obama's decision, Gibbs replied, "Prayer is something that the president does everyday." However, Gibbs did promise that Obama would sign a proclamation to recognize the day, as many administrations in the past have done.

While President George W. Bush marked the National Day of Prayer with a service at the White House for each of the eight years he served, this year, President Obama decided against holding a public ceremony.

However, in the midst of a war against radical Islam and his push to takeover health care, President Obama found time to hold a White House dinner honoring the Muslim holiday of Ramadan Kareem. And the guest list did not only include Muslims. Many Washington elites attended the ceremony including some Republicans such as Senator Richard Lugar.

But there's more. There are plans to hold a national prayer gathering of Muslims on September 25 in front of the US Capitol Building. According to one source, they are expecting at least 50,000 to attend from Mosques all across America. They say that they want Americans to see how they pray.

The planners of the event even set up a web site http://islamoncapitolhill.com It's a shame that the Obama White House ignored the National Day of Prayer and instead issued a paper proclamation, meanwhile he has a White House Celebration for a Muslim holiday. I have no problem with the Muslim holiday but I do have a problem when it is celebrated in lieu of the National Day of Prayer. With Obama ramming down Ramadan down the throats of Americans, I hope Americans realize their leader uses faith as a political prop.