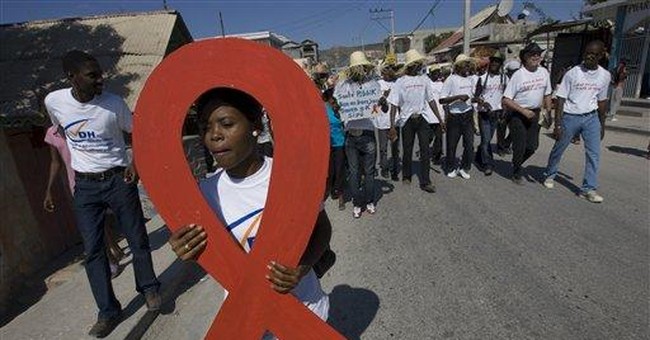 I didn’t happen to see one on Angelina Jolie. Nor on Miley Cyrus, nor on any of the most profiled attendees at the Academy Awards.

The fashion accessory I was looking for was the red ribbon, a symbol of HIV/AIDS awareness.

A few decades back, red ribbons were a fashion staple on the Red Carpet. But now, it seems, such ribbons are hard to come by.

Did AIDS disappear? Or is the Hollywood crowd simply missing in action when it comes to anti-AIDS humanitarian action?

It could be that, in pop psychology terms, Hollywood has simply moved on. For one thing, it’s been some years since the movie “Philadelphia,” which profiled a man dying from the disease, has been in theaters. The main character in “Milk,” the cinematic valentine to the gay rights movement, died long before AIDS was a household term.

This year, white ribbons hit the Oscars. For conservatives, the white ribbon has become synonymous with the campaign against pornography. But for Hollywood types, the white ribbon stands for “marriage equality,” which can be translated to mean “same sex marriage.” In fact, one Internet report said that the people behind “Milk” would be sporting the ribbons at the Academy’s night of nights. Apparently, Dave Grohl of the musical group Foo Fighters wore the white ribbon to the Grammys, while actress Ann Hathaway wore the ivory ribbon to Inaugural events.

Even AIDS activists admit that red ribbons are not as common as they used to be, despite the fact that the Gay Men’s Chorus apparently wore them during an Inaugural ceremony at the Lincoln Memorial. But there may be something else at work here, besides the notoriously short attention span of the Hollywood establishment.

No less a liberal bastion than the New York Times admitted that former President George W. Bush’s Emergency Plan for AIDS Relief may be “the most lasting bipartisan accomplishment of the Bush presidency.”

The much-maligned George W. made the fight against global AIDS a hallmark of his administration. More than a million AIDS patients received critical medicine, thanks to the former commander-in-chief. His nemesis, Senator John Kerry of Massachusetts, was quoted in the Times as saying, “It’s a good thing that he wanted to spend the money. I think it represents a tremendous accomplishment for the country.”

The AIDS threat has certainly not disappeared, but the unabashedly liberal members of the Hollywood regime cannot bring themselves to admit the obvious: Bush managed to achieve victories in the war against AIDS. As one doctor told the Times, “Just because it has been done under Bush, it is not something the country should not be proud of.”

Hollywood causes come and go. But real humanitarians deserve our lasting respect. Despite his flaws, George W. Bush proved to be a hero to people living with the deadly disease known as AIDS. It doesn’t matter whether he’s ever saluted with a ribbon. The lives he changed and possibly saved are tribute enough.