A Quick Compelling Bible Study Vol. 34: What Jesus Says About ‘Bread of Life’

Myra Kahn Adams
|
Posted: Nov 08, 2020 12:01 AM
Share   Tweet
The opinions expressed by columnists are their own and do not necessarily represent the views of Townhall.com. 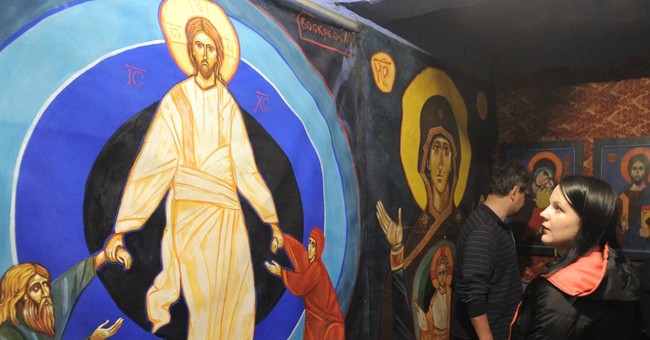 One of my dearest memories is from our wedding ceremony when my husband’s brother, Keith, played the guitar and sang, “I Am The Bread of Life,”  one of our favorite hymns.  And, if you listened and liked that version, you will enjoy this upbeat performance by the University of Notre Dame Folk Choir.

Tragically, Keith died of cancer at age 55 in 2011. Consequently, whenever we hear the hymn, we think of him.

“I Am the Bread of Life” was written in 1966 by Sister Suzanne Toolan, a Catholic nun. Toolan tells an astonishing story about how she initially tossed her composition in the trash.

The hymn’s lyrics and themes are from Scripture and boldly proclaim the major concepts of Jesus’ teachings, as previously discussed in Vol. 32 of this Study: “What Jesus Said About Eternal Life,” and Vol. 21: ‘I AM.’

The title and opening lyric is taken from these verses: (Bold added for emphasis)

"Sir," they said, "always give us this bread." Then Jesus declared, "I am the bread of life. Whoever comes to me will never go hungry, and whoever believes in me will never be thirsty. But as I told you, you have seen me and still you do not believe” (John 6:32-36).

Today we will review and discuss the complete lyrics to “I Am the Bread of Life.”

We read in (John 6:32-36) — as written in the Book of Exodus — Jesus said, “it is my Father who gives you the true bread from heaven.” Jesus speaks of the bread (manna) that fell from the sky, giving the followers of Moses the sustenance to live while wandering in the desert for 40 years. But then, Jesus proclaims, “I am the bread of life.” Thus, after referring to “my Father,” Jesus says HE is the giver of life. Moreover, later in John’s Gospel, Jesus states as does the hymn’s verse, “No one can come to Me unless the Father who sent Me draws them” (John 6:44). That verse mirrors what believers consider to be the ultimate “truth” of Jesus: "I am the way and the truth and the life. No one comes to the Father except through Me” (John 14:6).  Meaning, if you come to Him, upon your death, Jesus will raise you up and grant you eternal life.

That “truth” is reflected in Sister Toolan’s writing about why her hymn resonates with believers: “Its popularity stems from its message of resurrection, which is so strong in these words of Jesus. We so need that message of hope. I am always touched when people tell me that at the funeral of a mother, father or friend, these sung words of Jesus gave them consolation. Then I know the hymn has done its work.”

The lyrics refer to the Eucharist — the most essential part of the Mass when the communion bread and wine are distributed to congregants. Generally and traditionally, many Catholics believe they are receiving the actual body and blood of Jesus.

Conversely, and again in general (because this is a very passionate, divisive issue), non-Catholics believe they are symbolically receiving His body and blood.

The lyrics reflect Jesus’ teaching during the Passover Seder — known as the “Last Supper” — when Jesus was betrayed, leading to his Friday crucifixion. Here are the verses:

And He took bread, gave thanks and broke it, and gave it to them, saying, "This is My body given for you; do this in remembrance of Me." In the same way, after the supper he took the cup, saying, "This cup is the new covenant in My blood, which is poured out for you” (Luke 22: 19 -20).

Jesus offers Himself as the sacrifice for the sins of Man.

Unless you eat
Of the flesh of the Son of Man
And drink of His blood,
You shall not have life within you.

(Chorus) And I will raise him up..

The third verse again quotes from John’s Gospel:
Jesus said to them, “Very truly I tell you, unless you eat the flesh of the Son of Man and drink His blood, you have no life in you” (John 6:53).

Throughout Scripture, Jesus often refers to Himself as the “Son of Man.” Teaching that believing in His sacrifice is the only pathway to eternal life.

I am the Resurrection,
I am the Life,
He who believes in Me
Even if he die,
He shall live for ever.

Chorus: And I will raise him up...

Jesus said to her, "I am the resurrection and the life. The one who believes in Me will live, even though they die; and whoever lives by believing in Me will never die. Do you believe this?" (John 11:25-26).

Yes, Lord, we believe
That You are the Christ,
The Son of God
Who has come
Into the world.

Chorus: And I will raise him up..

The fifth verse is the answer to the question Jesus asks in John 11:26.

And to that answer, I say, Amen!

Finally, one more rendition of this magnificent hymn. An inspiring Zoom sing-a-long dedicated to my brother-in-law, Keith Adams, who played and loved music.