Why Doesn't College Work for Blacks?

Mona Charen
|
Posted: Apr 14, 2017 12:01 AM
Share   Tweet
The opinions expressed by columnists are their own and do not necessarily represent the views of Townhall.com. 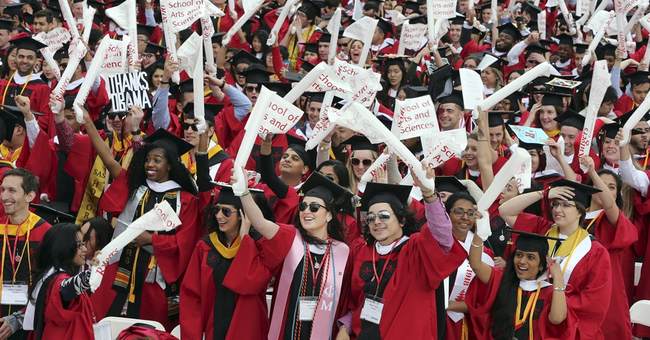 The headline was numbingly familiar: "For Blacks, College Is Not An Equalizer." The op-ed in The Washington Post by Ray Boshara explored what he called a "troubling paradox," namely that so many well-educated black Americans "feel so economically insecure."

It's a startling fact, Boshara continued, "that blacks with college degrees have lost wealth over the past generation." White college graduates "saw their wealth soar by 86 percent" between 1992 and 2013, while black college graduates experienced a loss of 55 percent over the same period.

I made a little bet with myself as I read the piece: "2-to-1 he doesn't talk about family structure." Boshara is the director of St. Louis Federal Reserve's Center for Household Financial Stability and a senior fellow at the Aspen Institute. His piece is carefully argued and well-researched. He makes some valid points, such as that black and white college graduates "share and receive wealth very differently." Whereas white college graduates are likely to receive financial assistance from their parents, black college grads are more often the donors of funds -- to struggling family members, including their parents -- than the recipients of help themselves.

Boshara then lists some proposals for fixing the problem, such as "lending circles" and "matched savings programs" to make college more affordable for black students, along with the usual calls to combat racial discrimination.

As I feared, though, he avoided what I consider to be a key factor in the black/white difference. The great divide in wealth accumulation in America is founded on marriage. Married couples accumulate much more wealth than divorced or never-married people do. A study published by the National Bureau of Economic Research found that the median married couple in their 60s had 10 times more wealth than a typical single person.

An Ohio State study found that divorce decreases wealth by an average of 77 percent. Jay Zagorsky, the study's author, counseled: "If you really want to increase your wealth, get married and stay married. On the other hand, divorce can devastate your wealth."

Now consider the demographics of black college graduates. The overwhelming majority are women. Females now account for 66 percent of all bachelor's degrees earned by blacks; 70 percent of master's degrees; and 60 percent of doctorates. Women tend to desire husbands who are as educated or more educated than they are, which makes marriage more difficult for black women with higher-education degrees. According to an analysis by the Brookings Institution, the percentage of black female college graduates aged 25 to 35 who have never married is 60 percent, compared to 38 percent for white college-educated women.

Furthermore, only 2 percent of highly educated white women had children out of wedlock, whereas 26 percent of black women with four-year degrees did.

Unsurprisingly, more black than white women marry men who have less education. The Brookings study found that only 49 percent of college-educated black women marry men with at least some post-secondary education, compared with 84 percent of college-educated white women. Since education is so closely tied to income, a household with two college graduates is overwhelmingly likely to make more income than a household with only one college graduate. More white and Asian couples fit this pattern. They pool more resources and hold onto their nest egg into retirement. Oh, and black couples are more likely to divorce than others.

There are many additional reasons that stable married couples accumulate wealth. Family members are more likely to loan and donate money to a son-in-law, say, than to a live-in boyfriend. Husbands and wives complement one another in wealth strategies (men tend to be risk-takers, women tend to be cautious). Married couples are healthier and miss fewer days of work. Married men seem to be more motivated to get jobs and promotions than singles. These are just some of the dozens of factors.

The bruising reality for all Americans -- though, like most things, it is starker among African-Americans -- is that men are falling behind. The retreat from stable families that began in the 1960s and really hit the skids in the 1980s has now yielded adults who have been damaged (though not all obviously). As David Autor and Melanie Wasserman postulate, growing up in a mother-only home seems to hit boys harder than girls. Thus, there are fewer "marriageable" men for those women to marry, and the cycle becomes self-reinforcing.

There's nothing wrong in principle with efforts to make college more affordable and to focus on racial discrimination, but the real source of the black/white wealth disparity probably owes more to the marriage gap than to those things. The Aspen Institute should focus on that.