Mona Charen
|
Posted: Sep 30, 2016 12:01 AM
Share   Tweet
The opinions expressed by columnists are their own and do not necessarily represent the views of Townhall.com. 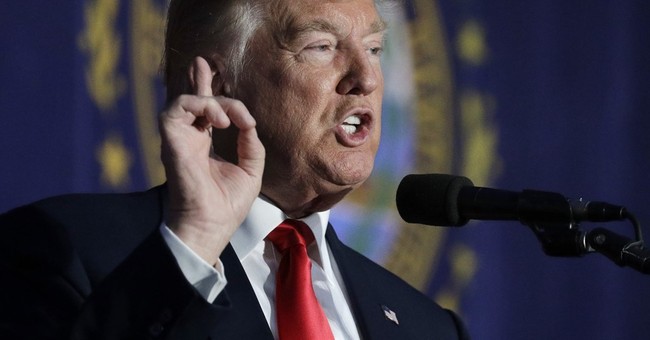 Trending
Donald Trump, always the hero of his own tales, closed out the first presidential debate with a tribute to his own courtesy and high-mindedness: "I was going to say something extremely rough to Hillary, to her family," he said. "And I said to myself, I can't do it. I just can't do it. It's inappropriate, it's not nice. But she's spent hundreds of millions of dollars on negative ads on me."

Later, the candidate's son, Eric Trump, offered that it required not just magnanimity for Trump to avoid mentioning the topic, but "a lot of courage."

The rhetorical term for what Trump is up to here is called paralipsis. It's raising something by claiming to abjure it. "I could mention your DUIs, but I'll refrain." Thanks.

Once the campaign boiled down to two tabloid candidates, this pass was inevitable. I'm old enough to remember 2015, when many in both parties opposed the specter of another Bush or another Clinton precisely because of weariness with all that they represent. The voters decreed otherwise, so let's iron out a few wrinkles.

Trump must presume that the Clinton sex scandals (and it must be those, and not the financial and other scandals he's referring to, because Chelsea Clinton's presence supposedly stayed his tongue) represent a vulnerability for Hillary Clinton. That's a large presumption. Most voters probably think of her as the victim of her husband's behavior. Her favorability ratings shot up during the Lewinsky scandal.

Does she deserve sympathy? Rep. Marsha Blackburn expressed what she perceived to be the Trump camp's view when she offered: "I find it so interesting that there continues to be this conversation about what he has said when you look at what she has done: Gennifer Flowers, Paula Jones, Monica Lewinsky. My goodness."

Blackburn is a little confused. The party line on Trump's wild, cruel, and dangerous remarks on many subjects is to contrast what Trump has (SET ITAL) said (END ITAL) with what Clinton has (SET ITAL) done. (END ITAL) But in this case, what Clinton did was entirely verbal. She made comments about the women who accused her husband of sexual harassment and/or affairs. There are suggestions that she may have participated in behind-the-scenes efforts to discredit the women who revealed encounters with him. Her actual public comments were few, though she famously claimed that the Lewinsky story was part of a "vast right-wing conspiracy."

It's not entirely clear that this is a slam-dunk against her. In the first place, people grew bored with the subject in 1998, so it's hard to imagine that it's some sort of silver bullet now.

Second, while it's possible that she is a total cynic, using her marriage as a vehicle for her ambitions, it's also possible that it was more complicated than that -- that she actually loved him and chose to forgive him. Who knows? Perhaps her determination to discredit Bill's accusers had two motives: 1) to help his career, and 2) to delude herself as well. There may be shades of gray here.

But whatever the peculiarities of her psychology and however nasty (not to say pathetic) her decision to go after Bill's women, there is certainly no doubt that as between Bill and Hillary, he was by far the more culpable. He disgraced himself, humiliated his wife and embarrassed his daughter. That he was beyond shame -- and carried the whole country with him in the 1990s -- is his lasting legacy.

Here's the twist: Look at the man who threatens to pull the trigger on mentioning the Clinton scandals -- a serial adulterer who is more removed from twinges of conscience than any figure in American political life. He boasts of his extramarital affairs. He humiliated the mother of his children. He is the Playboy philosopher made flesh. He even found the time to mock Paula Jones as a "loser" and argue that Bill Clinton's conduct was "totally unimportant." His factotums, Newt Gingrich and Rudy Giuliani, are also serial adulterers, though they didn't boast about it. Still, their boss's crudeness has now rubbed off. Giuliani sniped that if Hillary Clinton really didn't detect her husband's affair with Lewinsky, she was "too stupid to be president."

Neither political party has a monopoly on virtue. But there was a time when Republicans at least paid lip service to the ideal of marital faithfulness, and even felt constrained to resign their offices when caught out (see: Livingston, Bob). But Donald Trump has changed the Republican Party. A Clinton now leads one party, and the other is Clintonesque. Pots/kettles.