Mona Charen
|
Posted: Jan 13, 2016 6:12 PM
Share   Tweet
The opinions expressed by columnists are their own and do not necessarily represent the views of Townhall.com. 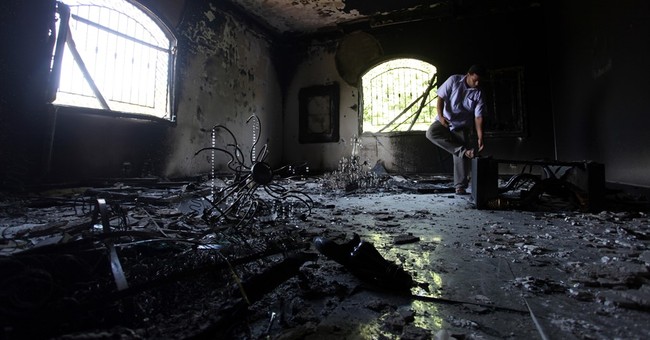 A new movie that touches upon the election prospects of one female candidate for president debuts this week. Will "13 Hours: The Secret Soldiers of Benghazi" provoke thousands of angry viewers to march on Hillary Clinton's home with torchlights and pitchforks? Doubtful. The film is somewhat oblique. Hillary Clinton's name is not mentioned. The infamous Susan Rice clips blaming the attack on a video do not appear (though the film does mention, slightly mordantly, that "press reports" are citing a video). Yet even for those coming to the question for the first time, the film very clearly conveys filmmaker Michael Bay's outrage that a tiny band of unbelievably brave Americans was left to fight off a company of al-Qaida-linked terrorists for, yes, 13 hours, while the vast land, sea and air resources of the U.S. military were not sent to their rescue.

Recent history would suggest that "13 Hours" will be a commercial success. Hollywood's anti-war and anti-American films (there have been many) have had lukewarm ("Body of Lies") to dismal ("War, Inc.") receptions. But films portraying American courage and fortitude, especially "Lone Survivor" and "American Sniper," have been huge hits.

As the subtitle suggests, "13 Hours" is the story of the tough men who fight our battles. They are portrayed lovingly in this film. They are men who adore their families, who have each other's backs, and who are careful about when and how they use the force they are so very skilled at deploying. Even after wave upon wave of brutal attacks, these former Navy Seals don't fire reflexively when cars approach the compound or the annex in Benghazi; they wait until they see aggressive moves.

That they risked and in some cases lost their lives was a matter of heroism, not duty. The CIA officer in charge countermanded their effort to leave the CIA annex and head to the consulate, a mile away, when it first came under attack. Twenty-five minutes later, half a dozen men disobeyed and headed to the consulate anyway. The scene there was harrowing. Smoke inhalation is a terrible death.

But the night was young. Apparently, the al-Qaida-linked terrorists were well-briefed on the location of the secret CIA annex, and the fight continued when the contractors retreated to that location. The warriors took up positions on the roof, protecting the 26 people inside. There is the suggestion throughout the movie that some Libyans betrayed their American allies, while others proved reliable. Whether that is evidence of the treachery of the Middle East or just the nature of war is a matter for the viewer to decide.

There are three questions about Benghazi that have never been satisfactorily answered by Clinton or the Obama administration. One: Why was security so inadequate? Two: Why was no military help dispatched as the battle unfolded? And three: Why did the administration lie to the American people about the nature of the attack, blaming an anti-Islam video rather than al-Qaida? This film focuses chiefly on No. 2 -- and rightly so, in my judgment. While the other questions are serious, for me, it has always been the failure to attempt a rescue of Americans under fire that was the most unforgivable and nearly inexplicable aspect of the story.

The administration issued bland denials that any rescue was possible. Yet recently released emails, such as that from Jeremy Bash, aide to then-Secretary of Defense Leon Panetta, to Clinton aides on Sept. 11, 2012, revealed the opposite: "After consulting with General Dempsey, General Ham and the Joint Staff, we have identified the forces that could move to Benghazi. They are spinning up as we speak."

There were F-18s at the Sigonella Naval Air Station in Italy, about a one-hour flight from Benghazi. As Popular Mechanics explained: "Jet warplanes can do more than fight and frighten. They can look at the conditions below. Air Force and Navy warplanes are equipped with targeting systems that pilots use to launch precision strikes and assess the damage after they attack. ... F-18s have LITENING pods ... that can pick out individuals on the ground, day or night, and through clouds. The system can also see laser designators used by troops on the ground, and some reports ... claim the team at Benghazi had such a designator on the roof of the CIA safe house."

For whatever reason, President Obama was not moved enough by the plight of besieged Americans to send in the cavalry. That, more than the post-hoc confection about an anti-Islam Internet video, was the crime, and that is what "13 Hours" depicts unflinchingly.