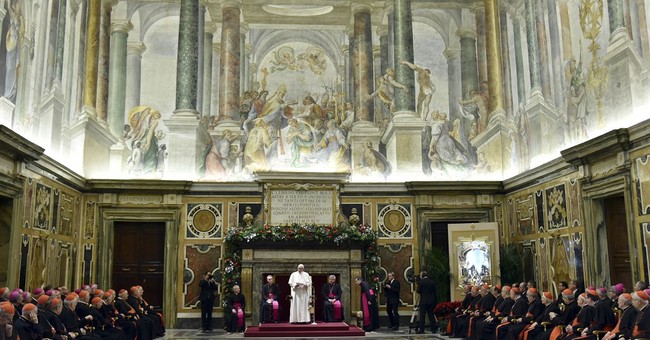 About 15 years ago, on Christmas Eve, our family departed from the traditional American Jewish observance of the holiday (ordering Chinese takeout) and elected to find an open restaurant. We drove to the local city center (or what passes for it in suburbia) and were stunned to find that not only were all of the restaurants open; they were packed.

I had pictured my Christian friends and neighbors at home, gathered around the table, Norman Rockwell-style, eating goose or ham or whatever gentiles eat, bathed in the twinkling lights of decorated trees. In fact, I liked to think of them that way, and finding crowds treating Christmas Eve as just another night was almost a sacrilege.

Americans have long resisted the secularizing trend of Western Europe. In many Western European countries, churches stand virtually empty on Sundays and few profess belief in God (37 percent in the United Kingdom; 27 percent in France; 28 percent in the Netherlands). In the United States, according to Gallup, 92 percent said they believed in God in as recently as 2011, which was down only 4 points from the 1944 response.

If belief in God has hardly budged in the post-World War II era, religious life has steadily declined. Pew reports that just since 2007, the number of Americans who identify as Christian has dropped by 8 points, from 78.4 percent to 70.6 percent. A bit more than one point of that change is attributable to the growth of other faiths, but most is accounted for by the increase in those who are unaffiliated. Among the unaffiliated, the big story is the young.

Great-Grandma and Great-Grandpa's generation, born between 1928 and 1945, is 85 percent Christian (57 percent Protestant and 24 percent Catholic). Their baby-boom children are 78 percent Christian. The Generation Xers are 70 percent Christian, and millennials are between 57 and 56 percent Christian depending on when they were born. Americans are dropping out of church, marrying outside the faith they were raised in and switching confessions at record rates. In 2014, 22.8 percent of American adults described themselves as unaffiliated with any church.

The loss of congregants has been most marked among mainline Protestants and Catholics, but evangelical churches have declined, too (at a slower pace).

What does this mean for politics? It's good news for the Democrats. Religious observance, like marriage, is a good predictor of political preference. Adults with no religion lean Democrat by 36 points. Young, white evangelical Protestants lean strongly Republican. The more religious identification sags, the fewer young Republicans there are.

Similarly, married adults tend to vote Republican, while singles, especially single women, lean heavily Democrat. Fifty-three percent of married women voted for Mitt Romney in 2012 (there is also overlap between religious identification and the tendency to wed). But marriage is declining. Whereas 65 percent of American adults were married in 1980, just 51 percent of adults were married in 2012. Among the 20- to 34-year-old cohort, 57 percent are never-marrieds.

Republicans who imagine that these changes don't affect voting might want to look at party ID. Between 1992 and 2014, the number of adults who said they were Democrats fell from 33 to 32 percent. The number who called themselves independent rose from 36 to 39 percent. And the number who identified as Republicans dropped from 28 to 23.

The 2016 election is an opportunity for many voters who would naturally be inclined to vote Democrat due to their age, ethnicity, region, lack of religious commitment and marital status to consider a Republican. It's always difficult for the same party to hold the White House for three consecutive terms, and Hillary Clinton is widely mistrusted.

But the Republican Party, judging by the polls so far, seems more determined to "send a message" than to choose a candidate who can win. Marco Rubio is practically conjured from central casting to win this election. He carries a big swing state. He has a great immigrant story. He is deeply knowledgeable on the issues; he's a superb debater and a tea party favorite, and (with the exception of immigration -- if you accept the premise that building a wall and deporting illegals is the conservative position) he is a firm conservative. Unlike Donald Trump or Ted Cruz, he articulates conservative ideas without needlessly antagonizing or frightening independents.

Portions of the Republican base are ferociously determined to punish Rubio for his immigration stance (though it differed only slightly from Sen. Cruz's, and as for Trump's views, name the day). But the new Republican establishments -- talk radio, Twitter, Heritage Action -- are single-issue constituencies, and they seem to be in the driver's seat.