When Dad Is the Devil 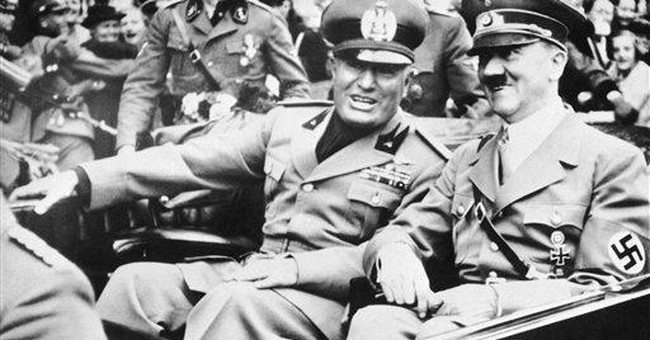 Trending
The bride, Edda, was 20, glamorous and well connected. The groom came from a prominent family. Their wedding was Italy's social event of the year in 1930. If the occasion was marred in any way, it was through the inability of the bride's father to part gracefully with his first-born daughter. He was so distraught that when the couple drove off for their honeymoon on Capri, Dad followed them for miles in his own car until Edda finally stopped, marched back to his car, and told him he had to turn around and go home.

That is our introduction to Edda Mussolini and her father, Benito, in Jay Nordlinger's gripping new book, "Children of Monsters: An Inquiry Into the Sons and Daughters of Dictators." "I have managed to bend Italy," Mussolini once said of his daughter, "but I doubt I will ever be able to bend Edda's will."

She remained a loyal daughter despite everything, including what you might suppose would be an irreparable rift: that Mussolini ordered the execution of her husband. If it strikes you as odd to see a man who crushed liberty in Italy and allied himself with one of the worst mass murderers in history as a sentimental father, you are in for more such surprises in Nordlinger's stories. You also will see that plot line repeated -- Saddam Hussein had two of his sons-in-law shot.

We expect that monstrous people will always behave despicably -- that Idi Amin, for example, must have ranted and spat and let fly with casual cruelties in his private life to match the grotesque crimes of his reign. But that's too simple. People are complex. One of Adolf Hitler's secretaries recalled later that he had always been very nice to her. Nordlinger relates that Amin, who killed an estimated 300,000 Ugandans (some in grotesque fashion), was a playful dad, a jokester. Some of his, ahem, 60 children remember him fondly.

Others dictators were truer to type. Joseph Stalin doted on his daughter Svetlana (at least during her childhood, not so much when she became a teenager), but permitted one of his sons, Vasily, to be raised by his bodyguards. Not surprisingly, Vasily became a brute. When the Nazis captured another of his sons, Yakov, Stalin denied that Yakov was his son and had his daughter-in-law arrested as the wife of a traitor. "In Hitler's camps," Stalin explained, "there are no Russian prisoners of war, only Russian traitors, and we will do away with them when the war is over." (Mao sent one of his daughters to prison.)

Svetlana would eventually defect to the United States -- leaving two children behind. Again, people are complicated. She would come under the spell of architect Frank Lloyd Wright's widow and live out Mrs. Wright's fantasy for a while. While Nordlinger presents Svetlana in all her complexity, she is one of the children of tyrants who earns his greatest respect. She chose to confront reality squarely and not live on lies.

Another with similar courage and integrity is Alina Fernandez. She is one of Fidel Castro's illegitimate children. As with other strongmen, the true number of children is difficult to say with precision, but Castro had 10 that we know of. Fernandez had privileges as the daughter of the dictator. As she herself wrote: "I could speak freely about the lack of freedom, without having a police squad get me out of bed, beat me up and take me to jail." Yet she wanted better for her own daughter, and in 1993, she defected.

Some children of dictators become exactly their parents -- the Kims of North Korea, for example, or Bashar al-Assad of Syria. Nicu Ceausescu was one such. Nordlinger writes: "Nicu was an out-of-control drunk and a rapist. He raped at will ... he was the type who could run red lights and kill people in the process -- with total impunity." The United Nations, it will not shock you to learn, gave Nicu a medal in 1985 to honor him for his leadership of International Youth Year. Nicu had an older brother, Valentin. He, too, could have behaved as abominably as he liked, but he studied physics, kept out of politics and led (still leads) a quiet life.

The stories of 20 dictators and their children are a dark prism through which to view the 20th and early 21st centuries. But the psychology is irresistibly fascinating. At the risk of cliche, I will say, "Children of Monsters" is impossible to put down.