It's Not Just Iran You Can't Trust 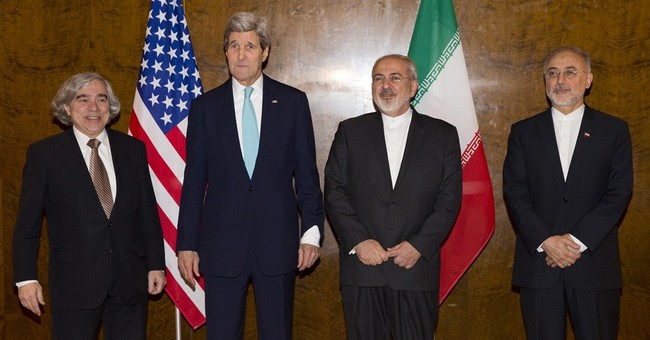 "Traitors!" screamed the headline of the New York Daily News. "Beneath the dignity of the institution I revere," huffed Vice President Joe Biden. "Dangerous and irresponsible," opined The Washington Post's David Ignatius. President Obama offered that it was "ironic" that the senators were on the same side as supposed "hardliners" in Iran.

The occasion for all of this snorting and pawing of earth was the letter signed by 47 Senate Republicans explaining to Iran's leadership that an "executive agreement" is only valid for the term of the executive.

Obama mentioned irony. Here's the one he doesn't see: He is hardly in a position to rebuke another branch for exceeding its constitutional authority.

First, a word about the executive branch. Though many presidents have claimed (and often been granted) primacy in foreign affairs, this is tradition, not law. The president must submit treaties to the Senate for "advice and consent." He has the power to make ambassadorial appointments (again, with the Senate's OK), and he is commander in chief. He is nowhere designated the sole arbiter of foreign policy. When Republicans have held the Oval Office, Democrats from David Bonior to Nancy Pelosi to Jimmy Carter have flagrantly intervened in relations with foreign governments.

Obama has never been punctilious about the Constitution. He has flouted his duty to "faithfully execute" the law whenever it was, as his former secretary of state might put it, "inconvenient." It is unlawful to change the terms of Obamacare by fiat as he has done countless times. It is unlawful to change immigration law after carefully explaining at least a dozen times why he lacked the authority to do so. He is not permitted to tell the Senate when they are in recess (as the Supreme Court affirmed 9-0) or to terminate the pensions of nonunion employees at GM. This is a very partial list.

The president who claimed, in an abrupt about-face in 2013, that he would request congressional authorization for air strikes on Syria because he believes "the people's representatives must be invested in what America does abroad" now proposes to conclude a treaty with America's most dangerous enemy and to sidestep the Senate's advice-and-consent role by playing word games.

It isn't just that the Iranians cannot be trusted. The president cannot be trusted. After six years, the evidence of his duplicity is abundant. The deceits about keeping your doctor and the tale about his mother being denied coverage when she had cancer will forever besmirch his signature legislation. With members of the Supreme Court sitting a few feet away, he falsely claimed the Citizens United case would permit foreign money to corrupt U.S. elections. This is another partial list.

The most consequential and possibly catastrophic of Obama's lies have concerned Iran. One almost pities those fair-minded people, like The Atlantic's Jeffrey Goldberg, who trusted him. In 2012, noting that many analysts disbelieved Obama's promises about preventing Iran from going nuclear, Goldberg wrote, "I'm in the camp of people, however, who take him at his word, in part because he's repeated himself on the subject so many times and in part because he has laid out such an effective argument against containment and for disruption, by force, if necessary." Among the most persuasive of Obama's pledges were these:

October 2008: "I will continue to be clear on the fact that an Iranian nuclear weapon would be profoundly destabilizing for the entire region. It is strongly in America's interest to prevent such a scenario."

June 2008: "The danger from Iran is grave, it is real, and my goal will be to eliminate this threat. .... Finally, let there be no doubt: I will always keep the threat of military action on the table to defend our security and our ally Israel."

In fact, as Michael Doran (Mosaic magazine), Michael Ledeen (PJ Media), Walter Russell Mead (The American Interest) and others have documented, the president's true wish -- for a detente with Iran including a deal paving the way to nuclear status -- has long been evident, but became brazenly so after he was safely reelected. The 47 senators who signed that letter are not just afraid of a nuclear Iran. They are afraid of our president.