Voyeurism Dressed As a Public Service 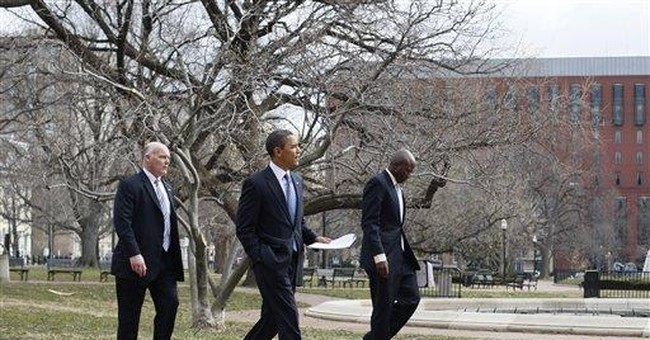 It's none of my business what Barack Obama's LDL cholesterol level is. And I don't have to know that he is using nicotine therapy to attempt to kick his smoking habit. But all of this and more is dutifully passed along after the president's annual physical. Want to know his resting heart rate? It's available. And we're told that President Obama has been instructed by his physicians to "eat healthier" and "moderate his alcohol intake."

What to make of this annual invasion of privacy? We've been privy to similar details about other presidents -- sometimes to an excruciating degree (President Carter revealed his troubles with hemorrhoids). In part, this may be a response to President Eisenhower's 1955 heart attack. Treatment was less sophisticated then, and the president spent seven weeks in the hospital. That was discomfiting enough, but with the advent of nuclear weapons, the Cold War, and the "football," anxiety about a possibly debilitated president led to passage of the 25th amendment to the Constitution, which provided for the smooth transition of power in the event the sitting president should die or become incapacitated.

But a Cold War sensitivity to the president's health is not the whole explanation for our current fetish for private health information. After all, Bill Clinton's refusal to release his medical records didn't undermine confidence in his ability to fulfill his term. So something else is going on.

Surely, it's one part voyeurism. They dress it up as a public service but it's gossip all the same. Whenever a public figure undergoes a medical test or surgery, we get minute-by-minute updates on his condition and full-color graphics of the affected part of the poor sop's body. When former president Clinton checked into an N.Y. hospital to have a stent placed in one of his arteries, CNN and the other cable channels were ready with easels and experts to walk us through it as if each of us were a family member. It was the same when Dick Cheney suffered a recent heart attack.

Concern for even the smallest details of a person's health is the proper realm of family and close friends, don't you think? To broadcast your stent operation or upper GI series or whatever on MSNBC is undignified -- or what the 18th century would probably have called too "familiar."

Besides, there lurks beneath all of this professed concern another sentiment -- less noble. In the case of Cheney, several news types expressed the "hope" that the former vice president was sticking to his diet and exercise regimen. When Clinton became ill, the AP reminded us of his eating habits: "Clinton's legend as a voracious and unhealthy eater was sealed in 1992, when the newly minted presidential candidate took reporters on jogs to McDonald's. He liked hamburgers, steaks, French fries -- lots of them -- and was a sloppy eater who could gobble an apple (core and all) in two bites and ask for more." It surfaces again and again -- a bossy smugness about other people's health.

We have arrived at a cultural moment when no one would dream of waxing judgmental about your sexual life or your manners, but we feel free to place you in metaphorical stocks for offenses against health. To prove yourself, show us your HDL-to-LDL ratio!

The busybodies who ask about the health habits of prominent people must imagine that they are performing a public service of some sort. Don't we hear incessantly about the crisis of obesity and sedentary habits? But while it makes sense to encourage the society as a whole to curb its outsize appetite for red meat, fried potatoes, and sugary sodas, it's hardly fair to single out individuals for scolding. In the first place, it's none of our business. And secondly, it's completely unfair. Nature is unpredictable. Some who exercise and eat a low-fat diet nevertheless have high cholesterol levels. And the reverse is often true as well.

But finally, it comes down to this: We are mortal. We sicken and die. This is a problem that not even Barack Obama claimed to be able to solve. Ailing people need sympathy and support. But Americans have veered awfully close to treating illness as a character flaw.