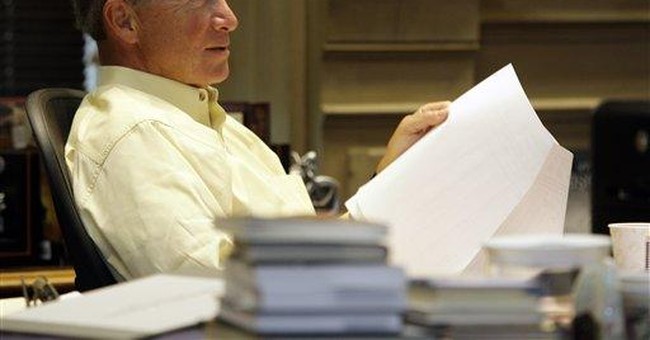 On the morning of Nov. 5, 2008, the world rocked to news that the United States had elected Barack Obama to the presidency. That same morning, Mitch Daniels, governor of Indiana, joined the list of those most often mentioned as potentially defeating President Obama in 2012.

In what may be a sign of unusual mental health and emotional balance, Daniels persistently declined to be considered a candidate. Among his many reasons, he told Brian Lamb, was reluctance to subject his family to the "savagery" of presidential politics. It is great news for the country, if not for him, that he has at last relented and agreed to keep the door open -- if only a crack.

He earned his spot on the short list of possibilities the hard way: In a quicksand year for Republicans, he managed to win re-election as governor by 18 points (in a state Obama carried). His margin of victory included 24 percent of Democrats, 20 percent of African-Americans, 51 percent of the youth vote, 67 percent of the elderly, and 57 percent of independents.

When Daniels took office in 2004, Indiana, which had been enduring Democratic governors for 16 years, was running an $800 million deficit. Four years later, it had a $1.3 billion surplus. Daniels accomplished this without raising taxes (as 66 percent of states have done); in fact, he passed the largest tax cut in state history. Nor did he cut essential services like education, as 40 states have done. As Mark Hemingway reported in National Review, "In the last three years, the state has repaid $760 million to schools and local governments that had been appropriated to finance the state's deficit spending." Additionally, Indiana has hired 800 new child welfare caseworkers and 250 state troopers, all while cutting the rate of increase in state spending from 5.9 to 2.8 percent annually.

Daniels has successfully courted business investment and has welcomed "two Toyota plants, a Honda factory, a $500 million Nestle facility, and a British Petroleum project that will bring $3.8 billion to the state ..."

This is a laboratory of successful conservative governance. As Daniels put it to NR, "Our health-care plan is health savings accounts for poor people. Our telecommunications policy is deregulation. Our infrastructure policy was the biggest privatization in state history." And his spending policy was less is more.

A former chief of the Office of Management and Budget (under George W. Bush), Daniels is known for his incisive mind and mastery of detail. In addition to government service (he also worked as an aide to Sen. Richard Lugar and as Ronald Reagan's political director), Daniels has headed a conservative think tank, the Hudson Institute, and served as president of Eli Lilly's North American operations.

This is not a slick, packaged politician. Daniels writes his own speeches -- and they are thoughtful, substantive exercises -- and even pens the content of his political ads. His demeanor is friendly and his posture is forward-looking. He has never run a negative ad. He is a conservative, but not of the grievance variety.

In style, Daniels is low-key and witty without being arrogant. In his first run for governor, he traveled the state on his motorcycle or in his motor home, spending the night as the guest of ordinary Hoosiers. His self-deprecating humor made his travels into a popular show -- "MitchTV" -- still available on YouTube. He treats every voter (supporter or not) with respect. And he's not above enjoying himself at a state fair (his wife won the watermelon seed spitting contest).

He's been called the "anti-Obama," but the contrast is not in style. Both men are poised, intelligent, and well spoken. The most glaring contrast (aside from philosophy) is Daniels' wealth of experience and record of governing success.

Daniels has offered the view that a Republican candidate in 2012 must present a credible plan for solving the spending, deficit, and debt crisis the country is in and campaign to "govern, not just to win."

He'd rather someone else do it, which is understandable. He promised Hoosiers he would serve out his term, and feels duty bound to abide by his promise. But Daniels has a combination of traits -- broad experience, wisdom, skill, and likeability -- that are rarer than rare. Surely Hoosiers would release him from his promise if he asked -- if we all asked.