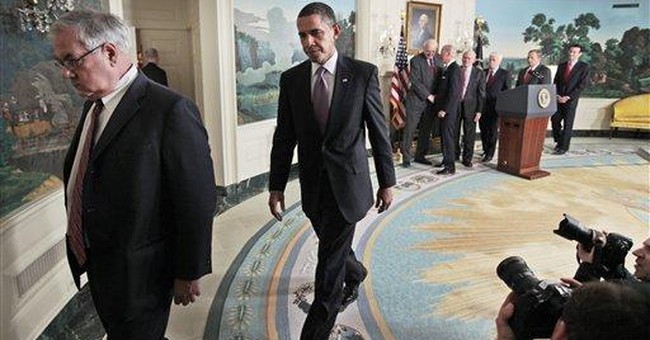 Is there an organizing principle behind the Obama administration's decisions on dealing with accused terrorists?

Announcing that Khalid Sheik Mohammad, mastermind of 9/11, and four co-conspirators, would be granted a civilian trial in Manhattan while the U.S.S. Cole bombers would receive a military tribunal, Attorney General Eric Holder was bombastic but opaque. "For over two hundred years," he intoned, "our nation has relied on a faithful adherence to the rule of law to bring criminals to justice ..." How did he decide who got a federal civilian court with its lavish legal protections and who got a military tribunal? It was a case-by-case determination, he explained, depending upon "the nature of the offense, the location in which the offense occurred, the identity of the victims, and the manner in which the case was investigated." Not a legal principle to found in there anywhere.

When critics observed that this amounted to an engraved invitation to al-Qaida to attack our civilians in preference to our warships, the attorney general countered that he had chosen the venue most likely to "maximize our chances for success." Really? At a Senate hearing, Sen. Jon Kyl, R-Ariz., shot down that fatuity by noting that KSM had already pleaded guilty at the military tribunal in Guantanamo. (He had also welcomed martyrdom -- one wish that ought to have been promptly granted.) At the same hearing, General Holder could not say whether, if U.S. forces captured Osama bin Laden tomorrow, he would be read his Miranda rights.

Do you sense that they have not thought this through?

Now that New York City has declined the KSM trial, the administration seems embarrassed and bereft of ideas. An Internet dating service perhaps? "ISO: venue for terror trial, hanging juries a must." Yes, the death penalty has been invoked by an attorney general who claims simultaneously a) that the civilian trial for a terrorist will showcase America's devotion to the rule of law; and b) no matter what the outcome, KSM will not walk free.

To be fair to Holder, his boss suffers from the same incoherence.

While daintily reading rights to terrorists we nab here, the U.S. government is attacking suspected terrorists in the wild removes of Pakistan with Hellfire missiles. As the National Journal reports:

Hidden behind walls of top-secret classification, senior U.S. government officials meet in what is essentially a star chamber to decide which enemies of the state to target for assassination. There is no single master list, but all names pass through an elaborate, multi-agency vetting process that ends at the level of the National Security Council and ultimately requires presidential approval.

That approval has apparently been readily forthcoming. President Obama approved 50 drone strikes in Pakistan since January 2009, compared with 33 in the last year of the Bush administration. The strikes have reportedly killed dozens of suspected terrorists (along with some civilians).

So sitting in the Pentagon in Virginia, the U.S. military tracks suspected terrorists nearly 7,000 miles away and blasts them with Predator drones when they get a clear shot. Former CIA officer Robert Baer adds, "And typically there is no independent verification from many of these ungoverned places to even confirm whether they pulled the trigger on the right guy. There are no questions asked."

Nor do they read them their rights. No trials. No process at all, just an intelligence report and a Hellfire missile. That is the way the Obama administration treats rumored terrorists in the border areas of Pakistan. In fact, ABC News has reported that the administration may even have targeted Anwar al-Awlaki, the American-born imam believed to have been a "spiritual guide" to the Fort Hood terrorist and the underwear bomber. For the record, this is fine with me. But how do they reconcile the contradiction?

When the administration apprehends an incontrovertible, still-bleeding terrorist who just attempted to blow up an airliner over Detroit, what to do they do? They read him his rights, assign him a lawyer, and invite him to remain silent. When they have the architect of 9/11 in Guantanamo Bay, awaiting trial in a military court, they announce that they will whisk him to New York and supply him with all the rights of an American citizen.

There are no principles at work here, just the vain and misguided pursuit of international respectability. Obama may well receive applause from Norwegian committees and Sorbonne students -- but not from wiser observers -- and not from those he is responsible for protecting.