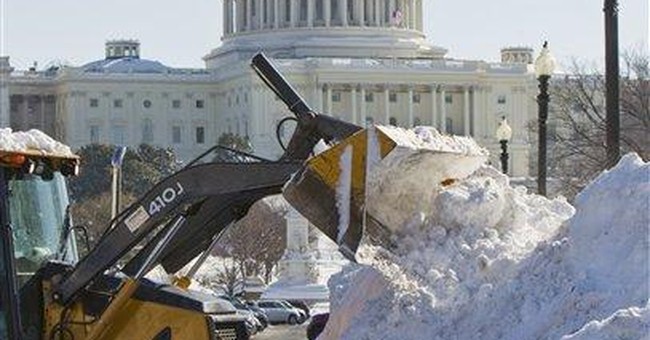 Al Gore is responsible for this. He taunted Mother Nature. Consider this her memo: Don't Presume To Know What I Have in Store.

Here in Fairfax County, we thought we were prepared. I had purchased enough milk to last our family of five for a week. We had plenty of food. As the blizzard raged Friday night, we were tucked comfortably in the family room under blankets alternately watching a movie and observing the snow blowing sideways past the windows. The only interruptions to our comfort were the obligatory trips to the (decreasingly visible) driveway for Cali, our 10-week-old puppy.

It was around the 3 a.m. outing that the power went out. I hadn't really worried enough about that possibility. Though we often lose power due to summer storms, and occasionally if there's ice, snow has never before left us dark. But this is no ordinary storm. This is Al Gore's blizzard. My husband opened the garage door manually. We fumbled with flashlights to find Cali's leash and get her safely in and out. Back under the covers until 6 a.m., by which time the house was pretty cold and Cali needed to go out again. One of the kids did this trip. The snow was about 10 inches deep but the storm showed no signs of abating.

When the ambient temperature drops below 50 degrees, door handles send a chill down the spine, and we won't speak of bathroom experiences. A warm drink can make all the difference. But our cook top is electric, as is the oven. All was dark and inert. In good pioneer spirit, we lit a fire in the fireplace and used a stainless steel pan to boil water. Those silicon oven mitts have never done more useful service! Pour the boiling water over the (thankfully previously ground beans) et voila -- hot coffee. Slightly smoky tasting, but hot. The world is righted. Repeat procedure for the kids (yes, my teenagers drink coffee).

Our hot water heater uses gas, so we could at least wash our hands and faces in warm water. And unlike our less fortunate neighbors, we have county, not well, water so the lack of electricity doesn't shut down our water supply. But actually taking a shower, only to emerge into near freezing air, didn't seem appealing. We plugged in the one corded phone we keep for such emergencies. Dominion Virginia Power estimated restoration by 11 a.m. Thinking of Sisyphus, we started shoveling. Now there were 13 or 14 inches. We helped the stranded cars near our house dig out.

At 12:30, the power did jump to life, then faltered, then came back on. Rejoice! There was a rush to power up everything we could -- laptops, cell phones, BlackBerries. You could read by the light of the charge brigade. I threw a turkey breast and some potatoes into the oven -- and dashed upstairs for the shower and (bless you, Dominion Power!) the hair dryer.

As the inside temperature climbed, we noticed that our supply of firewood was getting unexpectedly low. Did you dig all around the rack? Some may have fallen and might be covered with snow. Yes. We were nearly out. Well, no problem. We had power. Until 4 p.m. -- that sickening sound of buzzing when your computer backup needlessly tells you what you already know. And the outside temperature was plunging into the teens. Now we had 34 inches of snow, just a few logs left, and approaching darkness.

We ate the turkey and potatoes by candlelight, and played a game around the kitchen table. The mood was giddy. We had warm food, two dogs, two cats, shelter, and one another. We had to dig a path for Cali. The snow was way over her head. She thought it was grand, though. A frolic. Her golden fur wore a halo of white.

The boys bedded down in the family room in front of the fireplace. My husband and I slept in our room under four blankets. Only my face was cold. But in the morning, it was getting harder to be cheerful. Almost out of firewood, we burned an old table that had been in the storage room. If we could get out of our street, we could go to a hotel. Oh, but not with a puppy who doesn't yet distinguish between the outside and the kitchen floor. More fireplace coffee, less fun this time.

For now, the power has returned. But the forecast is for another 8 to 12 inches starting tomorrow. A little snow is beautiful, but this is getting to be bad taste. We're grinding coffee and praying that the firewood will be delivered in the morning, as promised. Otherwise, I'm eyeing the kitchen chairs sadly.