Coakley Would Be Quayled -- If She Were a Republican 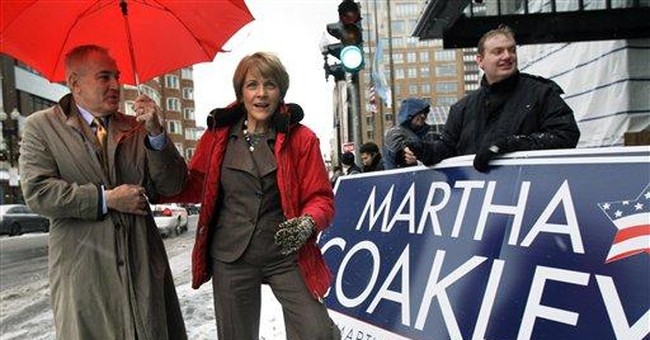 Oh, how different the world would look if Martha Coakley were a Republican! As it is, she gets the sort of gentle rebukes the press reserves for Democrats. Her campaign was too "lackadaisical," we are told. She was "overconfident" and too "buttoned down." Reading and watching the MSM, you wouldn't know that Coakley is a walking minefield. There is now -- and there always has been -- a completely different set of rules for Republicans.

If a Republican candidate in such a high-profile contest put out campaign literature that misspelled the name of her state, it would be worth, let's see, mentions on every Sunday gabfest and two, maybe three, jokes on the late-night shows. Dan Quayle's misspelling is the stuff of legend. Coakley's? Not so much.

When Coakley was challenged in an October debate about her lack of foreign policy credentials, she parried: "I have a sister who lives overseas, and she's been in England and now lives in the Middle East." Hmm. Just a few months ago, Sarah Palin said something similar, and the smart set has not finished laughing yet. Palin didn't say "I can see Russia from my house!" But the Tina Fey parody has replaced the less amusing truth. "Saturday Night Live" can be brilliant. But if Palin's comment was worthy of such mockery, wasn't Coakley's equally so? Just asking.

The woman who would like to sit in the U.S. Senate announced last week that there are no longer any terrorists in Afghanistan. Not since Joe Biden boasted (during the 2008 vice presidential debate) that he had chased Hezbollah from Lebanon have we heard such a loony claim. Where are the titters?

The Democrats style themselves as being in the party of the little guy. They're for the people rather than for the "special interests." Just ask them. Yet Martha Coakley sneered at the idea of shaking voters' hands "in the cold" and chose to spend a critical night just seven days before the election in Washington, D.C., at a high-roller fundraiser sponsored by drug and insurance companies. The host committee included Pfizer, Merck, Amgen, Sanofi-Aventis, Eli Lilly, Novartis, AstraZeneca and more. Blue Cross Blue Shield, Cigna, Humana, HealthSouth and UnitedHealth all were sipping white wine with Coakley.

When the president stumped for Coakley in Massachusetts on Sunday, he praised her humble ambitions: "She became a lawyer not to cash in, but to give hardworking people a fair shake. She became a lawyer to fight for working families like the one she grew up in." Oh, yes, and "she went after big insurance companies that misled people."

Members of the Fourth Estate always claim that hypocrisy is what they cannot stand. They are, they say, utterly nonpartisan scourges of that least forgivable political sin. Accordingly, they explain, if a Republican "family values" candidate is caught in a sexual indiscretion, he's fair game (even if he never has mentioned family values). But when Obama broke his solemn promise to abide by campaign finance limits and Coakley is passing the hat for insurance company cash, well, how about those Yankees?

Speaking of sports teams, Coakley is so fortunate to be a Democrat -- and ipso facto a woman of the people -- because she's a little rusty on her Massachusetts sports knowledge. Asked on a radio program about Curt Schilling's support for her opponent, Coakley dismissed Schilling as a Yankees fan. The incredulous interviewer could only stammer, "Curt Schilling? The Red Sox great pitcher of the bloody sock?" Now it was Coakley's turn to stammer: "Oh, am I wrong about that?"

She won't get hammered for it. She's a Democrat.

But in the final hours of the campaign, Coakley is an increasingly desperate Democrat who has stooped to slander. A lurid flier aimed at female voters claims that "1,736 women were raped in Massachusetts in 2008. Scott Brown wants hospitals to turn them all away." Brown is, as it happens, pro-choice (though he's in favor of more restrictions than Coakley is). This vile lie was based on Brown's support for a conscience exemption (which also was supported by Ted Kennedy) for emergency room personnel who do not wish to prescribe the abortifacient "morning-after pill." That's a world away from closing hospital doors on rape victims.

Coakley will get a pass on all this from the press. It's good to be a Democrat. Except, perhaps, on Wednesday morning.