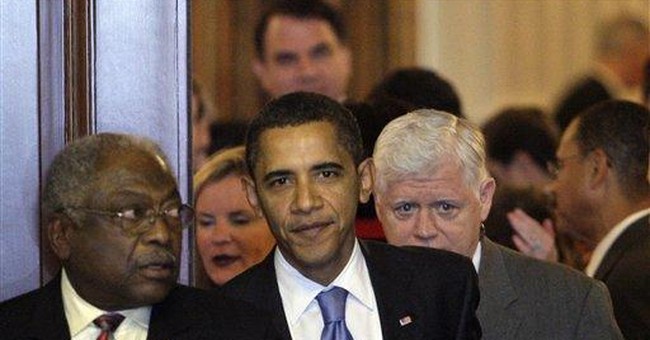 The president and his party in Congress are attempting to dig this country so deep into debt that we may not be able to climb out. This is a strong and resilient country, but we wouldn’t be the first great nation to bankrupt ourselves.

Four months ago, while the Democrats were hatching their health care behemoths, only policy wonks noticed a report issued by the Social Security and Medicare trustees. It showed that the combined unfunded liability of the two programs has now reached $107 trillion. That’s seven times the size of the U.S. economy, and it could go higher, as Medicare and Medicaid spending have consistently increased 2.5 percentage points faster than per capita GDP since 1970.

Just to pay for these programs -- excluding everything else the government does -- the federal government would have to collect one-third of the earnings of every American by 2054. That, or cut benefits.

This is a government-created vise. But like a neurotic who can never perceive the self-inflicted nature of his troubles, Democrats cannot or will not see that much of what is wrong with America’s health care system is government-caused. The patient has a 104-degree fever and Dr. Democrat is prescribing heating pads. The bills currently under consideration in the House and Senate will cost taxpayers more than $3 trillion over the first 10 years of their existence. They will burden the entire U.S. economy with new and onerous taxes, stifle medical advances, diminish the quality of care, and even then will not cover all of the uninsured.

The Obama administration has howled its indignation at what it calls "lies" about "death panels" and other aspects of reform. Yet everything about the Democrats’ overhaul plans is grounded in distortions and misrepresentations.

Democrats and their foot soldiers in the press gave wide circulation to the Harvard study suggesting that lack of health insurance causes 45,000 annual deaths. What they didn’t tell you was that the study was the work of Physicians for a National Health Program, an advocacy group for a single-payer system. The survey was flawed in many respects, but the authors themselves acknowledged the most salient: "Unmeasured characteristics (i.e., that individuals who place less value on health eschew both health insurance and healthy behaviors) might offer an alternative explanation for our findings."

It is simply not true that we are paying twice as much as any other industrialized nation and yet getting worse care. As this column and others have noted, the most common metrics used to compare U.S. health outcomes with those of other countries are life expectancy and infant mortality. Both are fatuous comparisons. The U.S. has a high murder rate, for example, which influences life expectancy statistics, not to mention an obesity epidemic. We also have more teenagers giving birth. And we count infant deaths differently from many other countries, including even the most severely premature babies in our statistics.

When you compare survival rates after a cancer diagnosis -- a much better gauge of health care quality -- the U.S. leads the world.

Are we spending too much on health care? Well, that much is true. But again, Democrats refuse to see that government incentives contributed to the problem. Making health insurance plans deductible for employers but not for individuals has encouraged a "third party payer" system that insulates people from the cost of their care. Surprise! This leads to overconsumption.

By encouraging a free-for-all liability system (half of all doctors are sued at least once) that enriches their chief donors, the trial lawyers, the Democrats have added billions to the cost of medical care by forcing doctors to practice defensive medicine.

Further, governments have jacked up the price of medical insurance by piling mandates on insurance companies, forcing them to cover everything from psychotherapy to IVF. Some states permit companies to sell basic catastrophic coverage, and it is quite affordable. If the government permitted interstate sales of health insurance, nearly everyone would be able to find affordable plans. But rather than consider a reform that would bring health insurance rates down, Speaker Pelosi prefers to demonize insurance companies as "villains," while President Obama rails at them for "holding us hostage."

Having misdiagnosed what ails us, the Nurse Ratched Democrats are now poised to administer their remedy. To fix an overly bureaucratic, regulated, and entitlement-heavy system, the Democrats are delivering much, much more of the same. If we were facing a likely fiscal train wreck before Barack Obama took office, we are facing a certainty now.