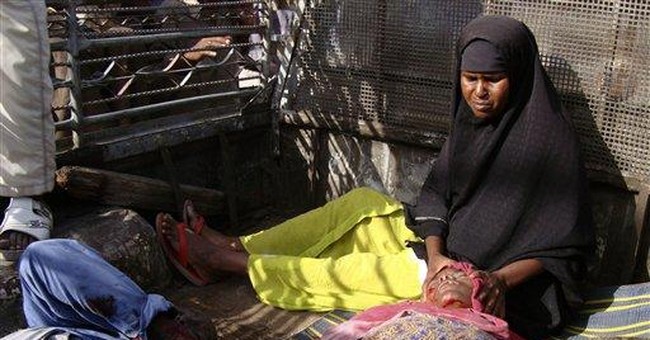 The United Nations Human Rights Council, a putrid perversion of every high ideal upon which it was founded, has issued a report calling the Israelis war criminals. The HRC has also, in obedience to the wishes of Chavez and Castro, ejected the representative from Honduras. In the very week it has committed these outrages, the Obama administration has announced that the United States, which quit the organization in 2006, will rejoin. Brilliant.

The Human Rights Council is the successor to the thoroughly discredited U.N. Human Rights Commission, which boasted such members as China, Zimbabwe, Russia, Libya, Saudi Arabia, and Pakistan. In 2004, the commission unanimously accepted membership for Sudan, a state actively engaged in genocide in Darfur. (That was when the U.S. walked out.)

Changing one word in its name, the Human Rights Council instantly resumed its former practices: ignoring massive human rights violations around the globe and condemning Israel. Anne Bayefsky of Eye on the UN summarizes:

"The council has passed more resolutions and decisions condemning Israel than all other 191 U.N. members combined. The council has one (of only ten) formal agenda items dedicated to criticizing Israel. And one agenda item to consider the human rights of the remaining 99.9 percent of the world's population. ... It has terminated human rights investigations on Belarus, Cuba, Liberia, and the Democratic Republic of the Congo. And all investigations of 'consistent patterns of gross and reliably attested violations of all human rights and all fundamental freedoms' in such states as Iran, Kyrgyzstan, the Maldives, Turkmenistan, and Uzbekistan have been 'discontinued.'"

The council's "investigation" of war crimes in Gaza, published this week, is everything we have come to expect from an organization that gives Cuba a pass and welcomes Sudan to monitor human rights violations.

In the first place, the mission's mandate was slanted from the start. It was tasked with investigating violations of international law by "the occupying Power, Israel, against the Palestinian people." One of the mission's four members, Christine Chinkin, signed a public letter denouncing Israel for "war crimes" before the investigation got under way. For this reason, Mary Robinson, former high commissioner for human rights (and no great friend of Israel) refused to participate. She said the mandate was "not balanced because it focuses on what Israel did, without calling for an investigation on the launch of the rockets by Hamas." She might have added that Israel is not the "occupying" power in Gaza, having withdrawn in 2005.

While the report accuses "both sides" of committing war crimes (and mentions those rockets, in passing), the bulk of the 575 page report addresses supposed Israeli offenses. The mission's capacity to hear impartial testimony was hampered by its willingness to permit Palestinian witnesses to be accompanied by Hamas officials. Call it the Middle Eastern version of Card Check. Nor could they expect to hear a balanced presentation from the representatives of radical non-governmental organizations within Israel who routinely side with the Palestinians. Without offering evidence for its conclusions, the mission denied widespread reporting that Hamas combatants dressed in civilian clothing, hid in hospitals, schools, and apartment buildings, and used ambulances for military transports.

Seated comfortably in Geneva, the mission denounced Israel for failing to take more precautions to protect civilians. It acknowledged neither Israel's extensive use of warning leaflets and phone calls, nor the culpability of Hamas in placing rocket launchers in civilian areas. But above all, the report turned reality on its head by conceiving of Israel, the target of 12,000 rockets fired directly into civilian areas, as the aggressor, and of Hamas, a terrorist gang behaving as terrorists do, as the victims. After enduring the terror of rocket attacks for eight years, Israel defended herself militarily. Now Israel stands morally condemned by the United Nations for doing so. Hamas, whose unrelenting aggression provoked a response, and whose use of human shields should be regarded as a war crime, is given a pass.

The U.N. scored a public relations coup in getting South African jurist Richard Goldstone, who is Jewish, to chair the panel. He must answer to his own conscience, but his participation does point up some of the bald contrasts in the world. While there are any number of Jews and even Israelis who side with the Palestinians, or whose longing for international respectability causes them to lean over backwards in criticizing Israel, there are no Palestinians who openly sympathize with Israel. Where do you find Palestinian moderates? In the graveyards.

Just as the U.N. Human Rights Council is besmirching itself in this way, the Obama administration elects to lend it the prestige of American membership. Shame appears to be in season.