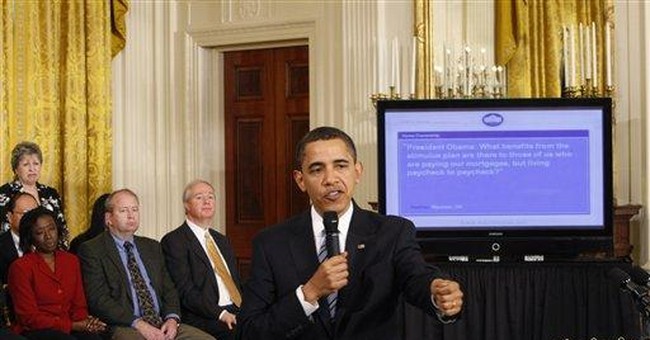 One of President Obama's signature boasts was that his election would, to use his term, "reboot" America's image in the world. Addressing thousands of Germans last summer, Obama said, "In Europe, the view that America is part of what has gone wrong in our world rather than a force to help make it right has become all too common." His election, he promised, would transform America's global image.

How's that project going? On the occasion of the Persian New Year, President Obama delivered a video message to the Iranian people and government, advisedly using the term "the Islamic Republic of Iran." The U.S., declared the president, desired a "new beginning" in relations with Iran, and would no longer engage in "threats" but seeks engagement that is "honest" and based upon "mutual respect." While cautioning that Iran could not assume its "rightful place in the community of nations" through "terror or arms," the president's message was otherwise strewn with rose petals.

Supreme Leader Ayatollah Ali Khamenei's response was, well, a little less than enthusiastic. While the crowd chanted "Death to America," Khamenei demanded: "Have you released Iranian assets? Have you lifted oppressive sanctions? Have you given up mudslinging and making accusations against the great Iranian nation and its officials? Have you given up your unconditional support of the Zionist regime?" Besides, the SL continued, "we don't know who is making decisions in America -- is it the president, the Congress, or some unknown people who pull the strings?" Khamenei further suggested that some American leaders have "demanded that our great and honorable nation be wiped out." President Obama might want to begin this "honest" dialogue by pointing out that it was Khamenei who spoke to a crowd chanting "Death to America." We don't do that sort of thing. In fact, they chant "Death to America" when their national soccer team scores a goal or when they've particularly enjoyed a concert. Their kids learn it in school -- rather as ours learn the Pledge of Allegiance. No American leader has ever called for Iran to be wiped out. But Iran's president has a little list of nations he threatens with genocide on a regular basis. The list consists of Israel, with the U.S. getting honorable mention from time to time.

President Obama wasn't fazed by Khamenei's response. At his news conference on March 24, he cited the Iranian reaction as a reason to be "persistent."

The new dawn for relations with Europe is slow to materialize, too. There was that unfortunate business with the prime minister of Great Britain, in which the president's team seemed unaware that Britain enjoys special status as primo inter pares of American allies. After British officials expressed dismay about the cool reception their leader received by the White House (and the tacky gift of DVDs), an unnamed administration official reportedly chided the British saying: "There's nothing special about Britain. You're just the same as the other 190 countries in the world. You shouldn't expect special treatment."

Nor is the new administration making a hit with the current president of the European Union. Czech Prime Minister Mirek Topolanek told the European Parliament that President Obama's economic policies represent "the road to Hell. ... Americans will need liquidity to finance all their measures and they will balance this with the sale of their bonds but this will undermine the liquidity of the global financial market. ... We need to read the history books and the lessons of history and the biggest success of the EU is the refusal to go this way." Other European leaders have pointedly declined President Obama's invitation to bankrupt their treasuries with deficit spending.

Secretary of State Clinton presented a cutesy "reset" button to the Russian ambassador. But apparently the State Department had gotten the Russian word wrong. Instead of "reset" it said "overcharge."

The North Koreans seem ready to launch a new long-range missile. And the Chinese, according to the Washington Post, have "the most active land-based ballistic and cruise missile program in the world." Recession notwithstanding, China is very aggressively increasing its military spending. Even by China's acknowledged account, military spending has increased 18 percent in the past year. But the Pentagon estimates that China spent twice as much -- between $105 billion and $150 billion on its military in 2008. In addition to missiles, China is pouring money into cyber warfare, a fleet of attack submarines, research and development on aircraft carriers, and a naval base on the southern island of Hainan, which would give the Chinese navy "direct access to vital international sea lanes ..." all while speculating about replacing the dollar as the world's reserve currency.

Perhaps we misunderstood Obama. Maybe instead of a reboot, we're just getting the boot.