They Won't Give Him Credit 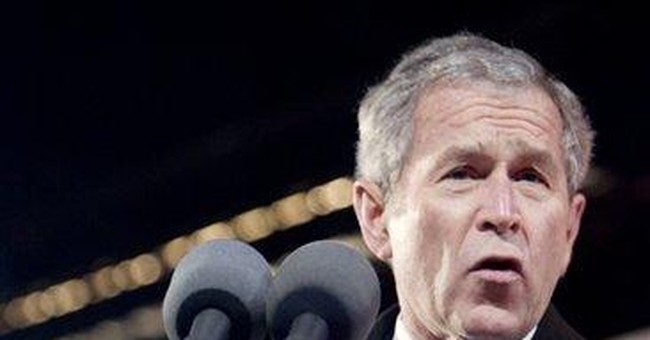 I can see it now. The world will be very different. The president of the United States will receive the Nobel Peace Prize for his lifesaving aid to victims of disease in Africa. Government and civic leaders from Europe and Asia will express their admiration. Americans will walk a little taller. Barack Obama will bow his head as the ribboned medal is extended

But wait. The president who deserves such an honor is in office now. It is George W. Bush who has devoted so much time, energy, and money (well, our money, but it was legal) to fighting AIDS and other diseases in Africa.

From the beginning of his administration, President Bush has pushed for more aid to Africa. Motivated perhaps by his deeply felt Christian faith (relieving poverty in Africa has become a major charitable push among evangelicals), the president has pressed for greater aid to Africa across the board. The original PEPFAR legislation (President's Emergency Plan for AIDS Relief), which passed in 2003, was the largest single health investment by any government ever ($15 billion). At the time the initiative was launched, only about 50,000 sub-Saharan Africans were receiving antiretroviral treatment for AIDS. Today, 1.7 million people in the region, as well as tens of thousands more around the globe, are receiving such treatment. PEPFAR has also funded efforts to prevent mother-to-child transmission of the AIDS virus, provided compassionate care to the sick and dying, and cared for 5 million orphans. One aspect of the program has been to reduce the stigma of the AIDS diagnosis in Africa.

In July of this year, the president requested that funding for PEPFAR be doubled to $30 billion. The new funding will be used to train 140,000 new health care workers. It would also address other illnesses, like tuberculosis, that often complicate AIDS.

The president also backed a malaria initiative that has provided an estimated 25 million Africans with nets, spraying, and other prevention and treatment options. Separate from the AIDS funds, the president has tripled development assistance and humanitarian aid to Africa since taking office.

When he traveled to Africa earlier this year (his second trip to the region as president), President Bush was greeted by enthusiastic crowds and grateful heads of state. Of the 10 nations around the world that expressed the most positive feelings toward the U.S.A. in a recent Pew poll, eight were in Africa. (The other two were Israel and the U.S.) President Jakaya Kikwete of Tanzania paid tribute to Mr. Bush, saying, as the Christian Science Monitor reported, "Different people may have different views about you and your administration and your legacy. We in Tanzania, if we are to speak for ourselves and for Africa, we know for sure that you, Mr. President, and your administration have been good friends of our country and of Africa."

"Bush Has Quietly Tripled Aid to Africa." So headlined a Washington Post story from 2006. But the president has been trying not to be quiet about it. On the contrary, he's been touting it as often as he can.

But he gets precious little credit. Yes, Rick Warren of the Saddleback Church has awarded President Bush the "International Medal of Peace" for his humanitarian efforts in Africa. And a few agitators for international aid like Bono and Bob Geldof have put in a few good words for the man. Actually, Geldof was pretty interesting. He said George Bush had done more for Africa than his predecessor and was "pissed off" at the press for failing to report it.

But for the most part, the beautiful people in America -- the Hollywood and university types, the book and magazine publishers, and of course, the major media -- have shown complete indifference to George W. Bush's dedication to a cause they purport to value. In fact, they've pointedly ignored it. It goes without saying that if Obama does even half of what Bush has done for AIDS sufferers in Africa, he will be -- in the eyes of those same people -- a candidate for canonization.

Of course the left can say whatever they like about George Bush and the war in Iraq and the war on terror. But when he does something completely in line with their own stated principles and values, it is simply mean-spirited of them to deny him his due.