Was Todd Palin Dissed, Too? 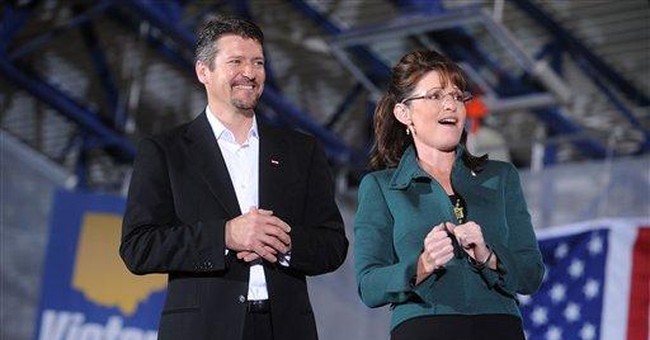 The knives -- long, short, and in-between -- have come out with particular swiftness searching for Sarah Palin's jugular. Unnamed aides to Sen. McCain have not just dished to the press about the former vice presidential candidate, they've sought to bury her.

For what it's worth, I don't think this backbiting will damage her. Who really believes that she didn't know Africa is a continent? Puh-leeeze! People know that insiders engage in this kind of blame shifting all the time. If Sarah Palin spends the next couple of years using her obvious smarts to bone up on national and international issues, she will be fine. She has a rare combination of charisma, the common touch, and firm values. It would be self-defeating for the Republican Party to toss her aside just because she debuted on the national stage too early.

But a friend (who doesn't always vote Republican) called with an interesting and different perspective on the Palin imbroglio. Not this one. And not the one about her clothes. But the original question as to whether a mother of five should even consider the vice presidency. "There were all these feminists saying 'A woman with children needs to stay at home,'" she noted with wonderment. But what about Todd?

I noticed the same thing. In all the discussion about whether a woman with children should seek an office that would require time away from home, practically no one paid any attention to the fact that Palin's husband, Todd, stood ready and willing to shoulder the lion's share of parenting.

My friend Ellen is an accomplished woman -- the main breadwinner for her family. And she attributes much of her success to a wonderful father. Her dad, an electrical engineer, had himself been raised by his dad, an immigrant from Sicily. Just after her father's fifth birthday, her grandmother was placed in a mental institution. She never came home. The Sicilian grandfather was left with six children to raise, one of who was my friend's father. He must have done a great job because all six went on to have fulfilled lives.

Ellen's father became a chemical engineer. He married a woman who, while not abusive or problematic in any way, turned out not to be great at parenting. It happens. So while dad worked a day job, he was always home by 6 p.m. so that he could spend time with Ellen and her three siblings. Each night he helped all four kids with their homework. He loved to cook and taught all of them. He was the one they went to with their troubles. Ellen sought him out to discuss issues with boyfriends, and decisions about classes and college. When her mother said she ought not to attend the high school prom, her dad gently intervened, and even went with Ellen to pick out a dress.

Ellen became a nurse and then a very successful small business owner. Her sister got a masters degree in math and engineering at Johns Hopkins, and has started three companies. Another sister became a vice president of Fidelity Investments. When she had her third child, which made three under the age of 5, she decided to withdraw from the business world for a while. Fidelity offered her inducements to remain but she turned them aside. Her husband was hired in her place. Ellen's brother became an electrical engineer. All four siblings are happily married (no divorces) and among them they have a passel of kids. "Behind every great woman is her dad," declares UC Davis psychologist Dean K. Simonton, author of a book on eminent women. "Women who are eminent are highly likely to have developed very close relationships with their fathers," he claims. In the past 15 years or so, we've heard a great deal about the importance of fathers -- that children raised by single mothers are far more likely to suffer a number of problems and pathologies that do not stalk children from intact families nearly so much. But what Ellen's story illustrates is that, even in intact families, fathers are sometimes -- maybe not usually, but sometimes -- the more nurturing parent. And as long as someone is there for the kids, why are feminists, of all people, complaining? To find out more about Mona Charen and read features by other Creators Syndicate writers and cartoonists, visit the Creators Syndicate Web page at www.creators.com. COPYRIGHT 2008 CREATORS SYNDICATE, INC.